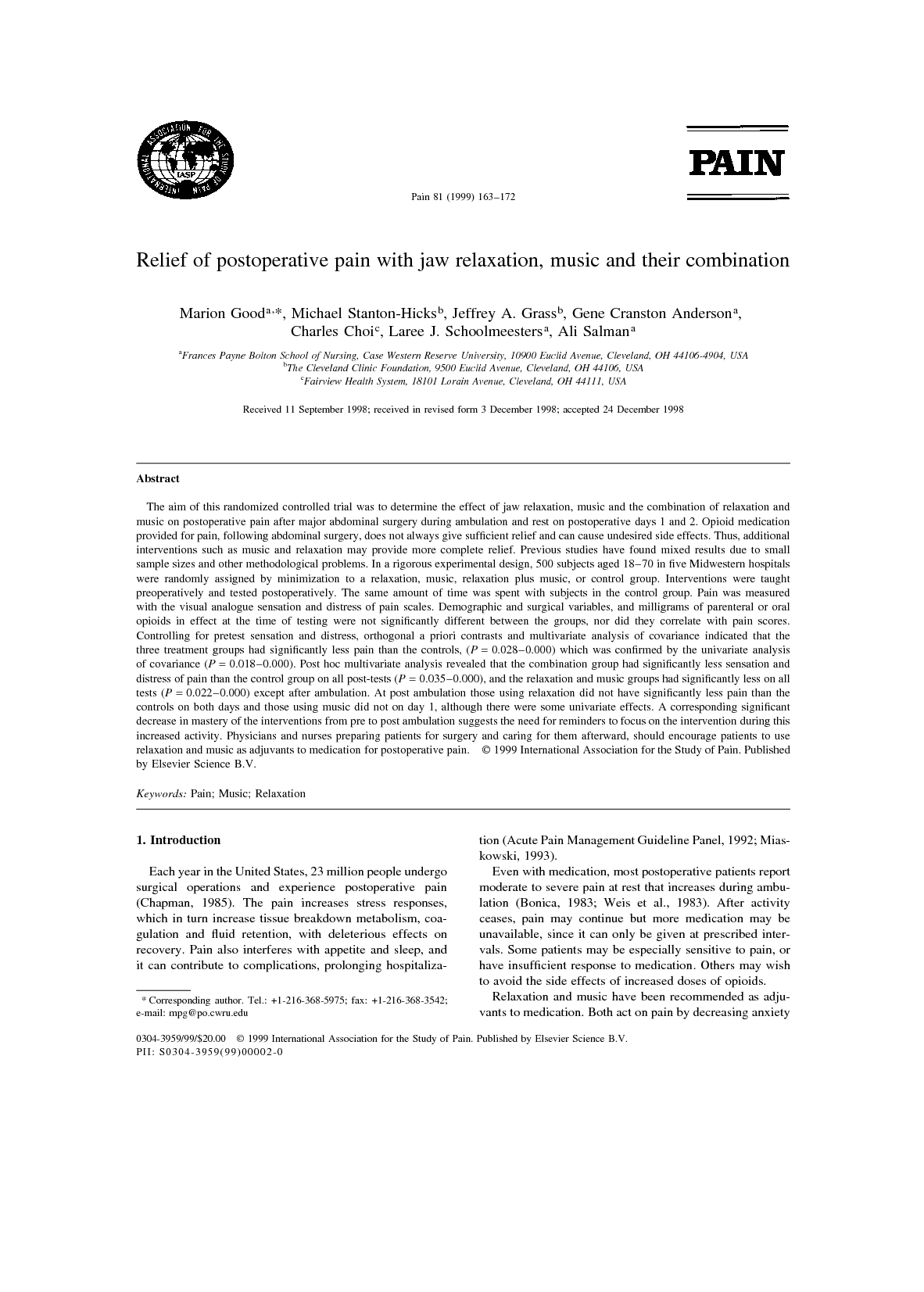 The aim of this randomized controlled trial was to determine the effect of jaw relaxation, music and the combination of relaxation and music on postoperative pain after major abdominal surgery during ambulation and rest on postoperative days 1 and 2. Opioid medication provided for pain, following abdominal surgery, does not always give sufficient relief and can cause undesired side effects. Thus, additional interventions such as music and relaxation may provide more complete relief. Previous studies have found mixed results due to small sample sizes and other methodological problems. In a rigorous experimental design, 500 subjects aged 18–70 in five Midwestern hospitals were randomly assigned by minimization to a relaxation, music, relaxation plus music, or control group. Interventions were taught preoperatively and tested postoperatively. The same amount of time was spent with subjects in the control group. Pain was measured with the visual analogue sensation and distress of pain scales. Demographic and surgical variables, and milligrams of parenteral or oral opioids in effect at the time of testing were not significantly different between the groups, nor did they correlate with pain scores. Controlling for pretest sensation and distress, orthogonal a priori contrasts and multivariate analysis of covariance indicated that the three treatment groups had significantly less pain than the controls, (P=0.028–0.000) which was confirmed by the univariate analysis of covariance (P=0.018–0.000). Post hoc multivariate analysis revealed that the combination group had significantly less sensation and distress of pain than the control group on all post-tests (P=0.035–0.000), and the relaxation and music groups had significantly less on all tests (P=0.022–0.000) except after ambulation. At post ambulation those using relaxation did not have significantly less pain than the controls on both days and those using music did not on day 1, although there were some univariate effects. A corresponding significant decrease in mastery of the interventions from pre to post ambulation suggests the need for reminders to focus on the intervention during this increased activity. Physicians and nurses preparing patients for surgery and caring for them afterward, should encourage patients to use relaxation and music as adjuvants to medication for postoperative pain.

Each year in the United States, 23 million people undergo surgical operations and experience postoperative pain (Chapman, 1985). The pain increases stress responses, which in turn increase tissue breakdown metabolism, coagulation and fluid retention, with deleterious effects on recovery. Pain also interferes with appetite and sleep, and it can contribute to complications, prolonging hospitalization (Acute Pain Management Guideline Panel, 1992; Miaskowski, 1993). Even with medication, most postoperative patients report moderate to severe pain at rest that increases during ambulation (Bonica, 1983; Weis et al., 1983). After activity ceases, pain may continue but more medication may be unavailable, since it can only be given at prescribed intervals. Some patients may be especially sensitive to pain, or have insufficient response to medication. Others may wish to avoid the side effects of increased doses of opioids. Relaxation and music have been recommended as adjuvants to medication. Both act on pain by decreasing anxiety (Borkovec and Sides, 1979; Hanser et al., 1983), lowering muscle tension and distracting attention (Good, 1995), thereby affecting the central control processes that modulate pain transmission. Relaxation directs the mind to concentrate on relaxing muscles, breathing evenly and reducing thoughts. Music is composed of auditory tones and rhythms that do not direct the mind but distract it, and they relax the body as well. Music can focus attention, facilitate breathing and stimulate the relaxation response (Livingston, 1979). Some studies have found that relaxation and music reduced pain, but in others results have been mixed due to small samples and other methodological problems, including lack of random assignment, lack of control for pretest pain, and little practice or assurance that subjects had mastered the techniques (Blankfield, 1991; Henry, 1995; Stevenson, 1995; Good, 1996; Sears and Carroll, 1998). In some studies relaxation or music reduced reports of sensory and affective pain (Flaherty and Fitzpatrick, 1978; Lawlis et al., 1985; Levin et al., 1987; Mullooly et al., 1988; Miller and Perry, 1990), while in others they reduced only affective pain (Wells, 1982; Horowitz et al., 1984; Mogan et al., 1985), had different results on different measures of pain (Good and Chin, 1998), or on different postoperative days (Good, 1995; Good and Chin, 1998). In other studies relaxation or music had no effect on pain but reportedly, provided a relaxing and pleasant experience (Heitz et al., 1992; Zimmerman et al., 1996; Heiser et al., 1997). As a result, the usefulness of these interventions remains unclear. In the randomized controlled trial reported here, jaw relaxation, music and the combination of relaxation and music were compared at ambulation and rest in a large sample with optimum control.