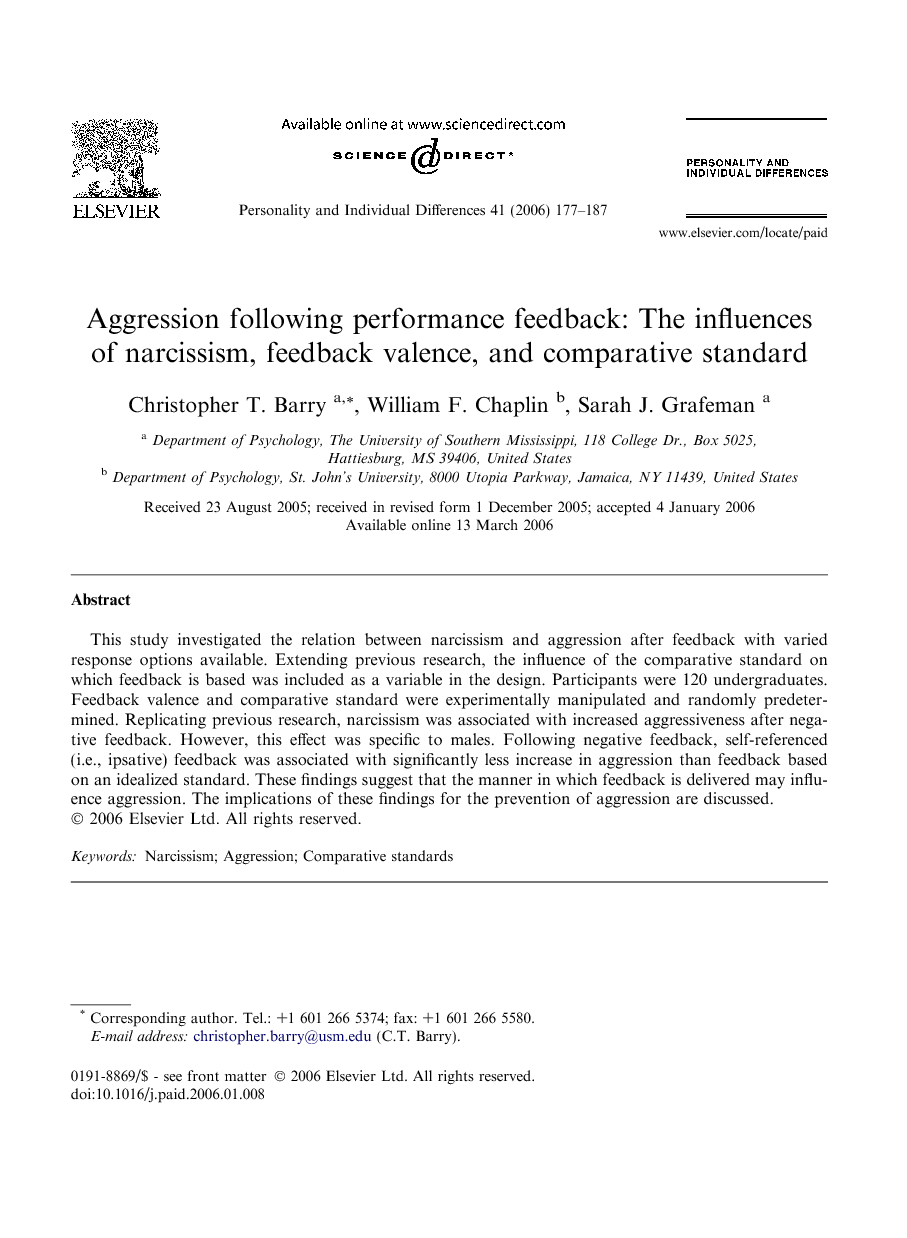 This study investigated the relation between narcissism and aggression after feedback with varied response options available. Extending previous research, the influence of the comparative standard on which feedback is based was included as a variable in the design. Participants were 120 undergraduates. Feedback valence and comparative standard were experimentally manipulated and randomly predetermined. Replicating previous research, narcissism was associated with increased aggressiveness after negative feedback. However, this effect was specific to males. Following negative feedback, self-referenced (i.e., ipsative) feedback was associated with significantly less increase in aggression than feedback based on an idealized standard. These findings suggest that the manner in which feedback is delivered may influence aggression. The implications of these findings for the prevention of aggression are discussed.

The present study sought to extend previous research suggesting that some aggression may stem from negative feedback (e.g., Bushman and Baumeister, 1998 and Twenge and Campbell, 2003). Specifically, this study investigated aggression in a context in which a variety of possible responses to performance feedback were available, considered the impact of both positive and negative feedback on aggression, and attempted to further elaborate the role of narcissism (Baumeister et al., 1996 and Rhodewalt and Morf, 1998) in understanding aggression in such situations. Research has indicated that social rejection or negative feedback about one’s ability and characteristics may lead to negative affect (e.g., anger; Rhodewalt and Morf, 1998 and Twenge and Campbell, 2003) or aggression (Bushman and Baumeister, 1998 and Feshbach, 1970). To explain the link between negative feedback and subsequent reactions, researchers have noted that anger and aggression may serve important personal functions, including restoring damaged self-esteem (Feshbach, 1970) or one’s public self-image (see review by Papps & O’Carroll, 1998). Therefore, an additional purpose of this study was to consider the role that the comparative standard used to provide feedback has in this process for some individuals, a role not previously investigated in experimental contexts. Previous studies have found that individuals can employ different standards to evaluate their performance, and the standard used can influence a person’s mood or response following a task or presentation of a stimulus (Goolsby and Chaplin, 1988 and Wilson et al., 1995). The three standards most commonly discussed are a normative standard (i.e., comparison relative to others), an ipsative standard (i.e., comparison relative to one’s past performance), and an idealized or expectation standard based on what one thinks could or should happen (i.e., comparison relative to one’s ideal performance; Albert, 1977, Chaplin and Buckner, 1988 and Festinger, 1954). Studies in this area have typically presented feedback implying a normative standard (e.g., “That is one of the worst essays I have read;” Bushman & Baumeister, 1998, p. 222). When no standard was directly implied in previous experiments, it is likely that participants varied in the standards that they inferred (Chaplin & Buckner, 1988), making it difficult to determine what standard might have guided their interpretations of the feedback and subsequent behaviors. Therefore, the current study extended previous research by explicitly establishing an evaluative context through which feedback would be delivered—a potentially important consideration in investigating the link between personality, feedback, and behavior. 1.1. Narcissism, feedback, and comparative standards Recent evidence regarding the link between social rejection and aggression (e.g., Bushman and Baumeister, 1998 and Twenge and Campbell, 2003) indicates that narcissism is important for predicting who will aggress following rejection. Specifically, Bushman and Baumeister (1998) found that individuals with high levels of narcissism were most aggressive following negative evaluations and were selective in terms of when and against whom they aggressed. Specifically, narcissism was not associated with aggression following positive feedback and was not predictive of aggression when the potential victim was not the source of the negative feedback. It has been reasoned that narcissists may regularly engage in aggression in everyday life because they have a better chance of receiving feedback that is contradictory and threatening to their elevated self-views (Bushman and Baumeister, 1998 and Papps and O’Carroll, 1998). Thus, narcissists seek to defend themselves against anything or anyone that is perceived as a direct threat to their grandiose self-image and self-presentation. However, the particular means through which they defend their self-view and attain admiration appear to be of little consequence to them (Raskin, Novacek, & Hogan, 1991a). Negative feedback of an interpersonal or social nature has been found to spark feelings of anger and hostility, especially among relatively narcissistic individuals (Bogart, Benotsch, & Pavlovic, 2004). In naturalistic comparisons obtained through diary entries, Bogart et al. (2004) found that narcissism was associated with more intense positive or negative feelings based on downward or upward social comparisons, respectively. Raskin et al. (1991a) describe Reich’s (1960) contention that narcissists may resort to aggression against others because of their “intensely competitive orientation” (p. 336). This competitive orientation is more likely be elicited by feedback based on one’s position relative to others than relative to ipsative or idealized standards. For individuals with high levels of narcissism, the strong motivation to be admired and seen in a positive light (Bushman and Baumeister, 1998, Raskin et al., 1991b and Rhodewalt and Morf, 1998) would be expected to contribute to negative arousal when their high self-expectations are challenged through negative idealized feedback. Thus, idealized comparative standards might be expected to evoke less aggression among individuals with narcissism than normative standards but more aggression than ipsative standards. 1.2. Hypotheses First, narcissism was expected to be associated with aggression prior to feedback and with increased aggression after negative feedback. Therefore, an interaction between feedback valence and narcissism was expected for predicting change in aggression. Secondly, narcissism and aggression were both expected to be higher among males (Bushman & Baumeister, 1998). Gender differences in the narcissism-feedback valence relation were also explored, as this issue has not been investigated in any known studies. Third, aggression following negative feedback was predicted to be highest when normative comparative standards were invoked, especially among individuals with higher levels of narcissism. Similarly, idealized standards were hypothesized to correspond to higher aggression than ipsative standards, especially for individuals with higher narcissism.