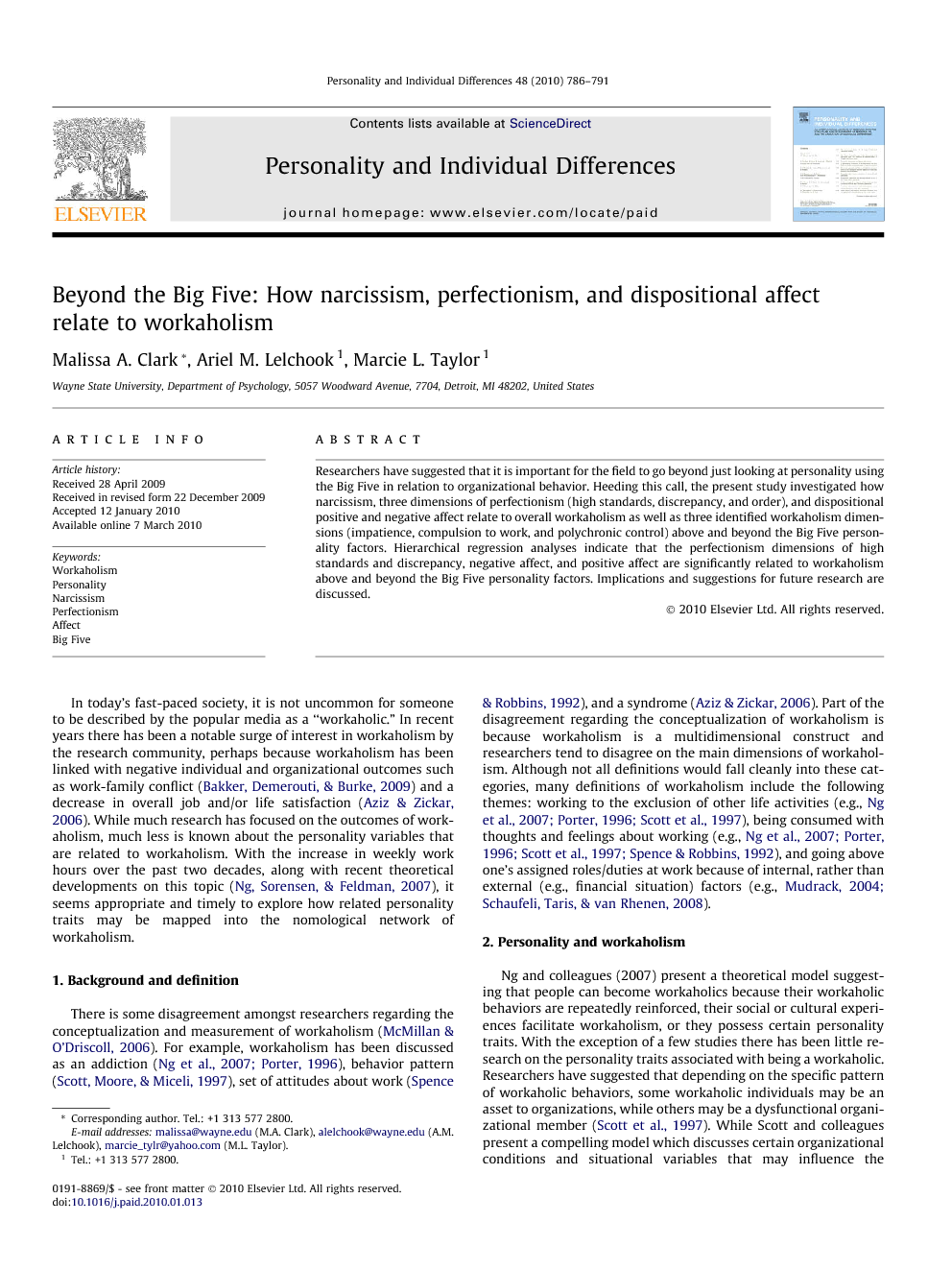 Researchers have suggested that it is important for the field to go beyond just looking at personality using the Big Five in relation to organizational behavior. Heeding this call, the present study investigated how narcissism, three dimensions of perfectionism (high standards, discrepancy, and order), and dispositional positive and negative affect relate to overall workaholism as well as three identified workaholism dimensions (impatience, compulsion to work, and polychronic control) above and beyond the Big Five personality factors. Hierarchical regression analyses indicate that the perfectionism dimensions of high standards and discrepancy, negative affect, and positive affect are significantly related to workaholism above and beyond the Big Five personality factors. Implications and suggestions for future research are discussed.

In today’s fast-paced society, it is not uncommon for someone to be described by the popular media as a “workaholic.” In recent years there has been a notable surge of interest in workaholism by the research community, perhaps because workaholism has been linked with negative individual and organizational outcomes such as work-family conflict (Bakker, Demerouti, & Burke, 2009) and a decrease in overall job and/or life satisfaction (Aziz & Zickar, 2006). While much research has focused on the outcomes of workaholism, much less is known about the personality variables that are related to workaholism. With the increase in weekly work hours over the past two decades, along with recent theoretical developments on this topic (Ng, Sorensen, & Feldman, 2007), it seems appropriate and timely to explore how related personality traits may be mapped into the nomological network of workaholism. 1. Background and definition There is some disagreement amongst researchers regarding the conceptualization and measurement of workaholism (McMillan & O’Driscoll, 2006). For example, workaholism has been discussed as an addiction (Ng et al., 2007 and Porter, 1996), behavior pattern (Scott, Moore, & Miceli, 1997), set of attitudes about work (Spence & Robbins, 1992), and a syndrome (Aziz & Zickar, 2006). Part of the disagreement regarding the conceptualization of workaholism is because workaholism is a multidimensional construct and researchers tend to disagree on the main dimensions of workaholism. Although not all definitions would fall cleanly into these categories, many definitions of workaholism include the following themes: working to the exclusion of other life activities (e.g., Ng et al., 2007, Porter, 1996 and Scott et al., 1997), being consumed with thoughts and feelings about working (e.g., Ng et al., 2007, Porter, 1996, Scott et al., 1997 and Spence and Robbins, 1992), and going above one’s assigned roles/duties at work because of internal, rather than external (e.g., financial situation) factors (e.g., Mudrack, 2004 and Schaufeli et al., 2008). 2. Personality and workaholism Ng and colleagues (2007) present a theoretical model suggesting that people can become workaholics because their workaholic behaviors are repeatedly reinforced, their social or cultural experiences facilitate workaholism, or they possess certain personality traits. With the exception of a few studies there has been little research on the personality traits associated with being a workaholic. Researchers have suggested that depending on the specific pattern of workaholic behaviors, some workaholic individuals may be an asset to organizations, while others may be a dysfunctional organizational member (Scott et al., 1997). While Scott and colleagues present a compelling model which discusses certain organizational conditions and situational variables that may influence the manifestation of workaholic behaviors (e.g., opportunities for control), they do not discuss personality in their model, and how different personality traits may relate to different patterns of workaholic behaviors. It is possible that certain personality traits (e.g., positive affect) may relate to what some consider “healthy” workaholic behaviors (e.g., going above and beyond one’s assigned work duties), while other personality traits (e.g., negative affect) may relate to dysfunctional workaholic behaviors (e.g., being consumed with thoughts about working). Thus, in the present study, we examine how several personality traits relate to different dimensions of workaholism. In one of the few studies to examine the link between personality and workaholism dimensions, Burke, Matthiesen, and Pallesen (2006) looked at the relationship between generalized self efficacy, the Big Five personality traits (Neuroticism, Extraversion, Conscientiousness, Openness to Experience, and Agreeableness) and three workaholism dimensions (drive to work, joy in work, and work involvement). Neuroticism was related to feeling driven to work, Extraversion was related to work involvement and joy in work, and generalized self-efficacy was related to all three dimensions. While demographic variables and situational characteristics accounted for no more than 3% of the variance in any of the dimensions, personality accounted for 10% of the variance in work involvement, 22% of the variance in drive to work, and 11% of the variance in joy in work. In another study, which investigated the relationship between obsessive–compulsive personality and workaholism, individuals scoring higher on measures of obstinacy and superego were more likely to engage in non-required work activities (Mudrack, 2004). While these studies provide some initial perspective on the nomological network of workaholism, unanswered questions remain regarding how personality characteristics beyond the Big Five relate to workaholism. Recently several researchers have stated that it is important for the field to go beyond just looking at the Big Five (e.g., Hough & Oswald, 2008). Heeding this call, we examine the relationship between several personality variables that, for the most part, have been examined very little (or not at all, in the case of narcissism), in relation to workaholism. Thus, our study goal was to examine how narcissism, perfectionism dimensions, and positive and negative affectivity relate to workaholism beyond the Big Five. Narcissism: Narcissistic individuals have a grandiose sense of their own self-importance, and they often boast or exaggerate their accomplishments ( Leonard & Harvey, 2008). Since narcissistic individuals value and pursue power and self-importance, this may lead to a preoccupation with work and succeeding at work, and working to the exclusion of other life activities; however, because narcissistic individuals think very highly of themselves, they are not likely to be plagued by constant feelings of guilt, which is often a driving force behind workaholic behavior. Although some researchers have found narcissism to positively correlate with Extraversion, and negatively correlate with Agreeableness and Neuroticism ( Graziano & Tobin, 2001), other researchers have noted that narcissism is not reflected well in the Big Five ( Paulhus & Williams, 2002). Therefore, we thought it was important to investigate the degree to which narcissism is related to workaholism above and beyond the Big Five.

The key finding from this study is that narcissism, the discrepancy and high standards dimensions of perfectionism, NA, and PA are all positively related to at least some dimensions of workaholism beyond the Big Five personality factors. Results suggest that workaholism may have both positive and negative components. This can have important implications for practitioners. For example, reward systems and organizational initiatives could focus on cultivating an organizational culture that rewards positive workaholic behaviors (e.g., multitasking) and discourages negative workaholic behaviors (e.g., excessive focus on work to the extent of ignoring family). Furthermore, the more we know about the personality traits associated with positive versus negative workaholic behaviors, the more equipped practitioners will be to select appropriate individuals for various roles within the organization. We urge researchers to continue to investigate the relationship between a broad range of personality variables and workaholism, examine how personality traits may interact with situational, contextual, or demographic variables (e.g., organizational culture or work characteristics), and investigate the relationship between workaholism dimensions and both negative and positive outcomes.