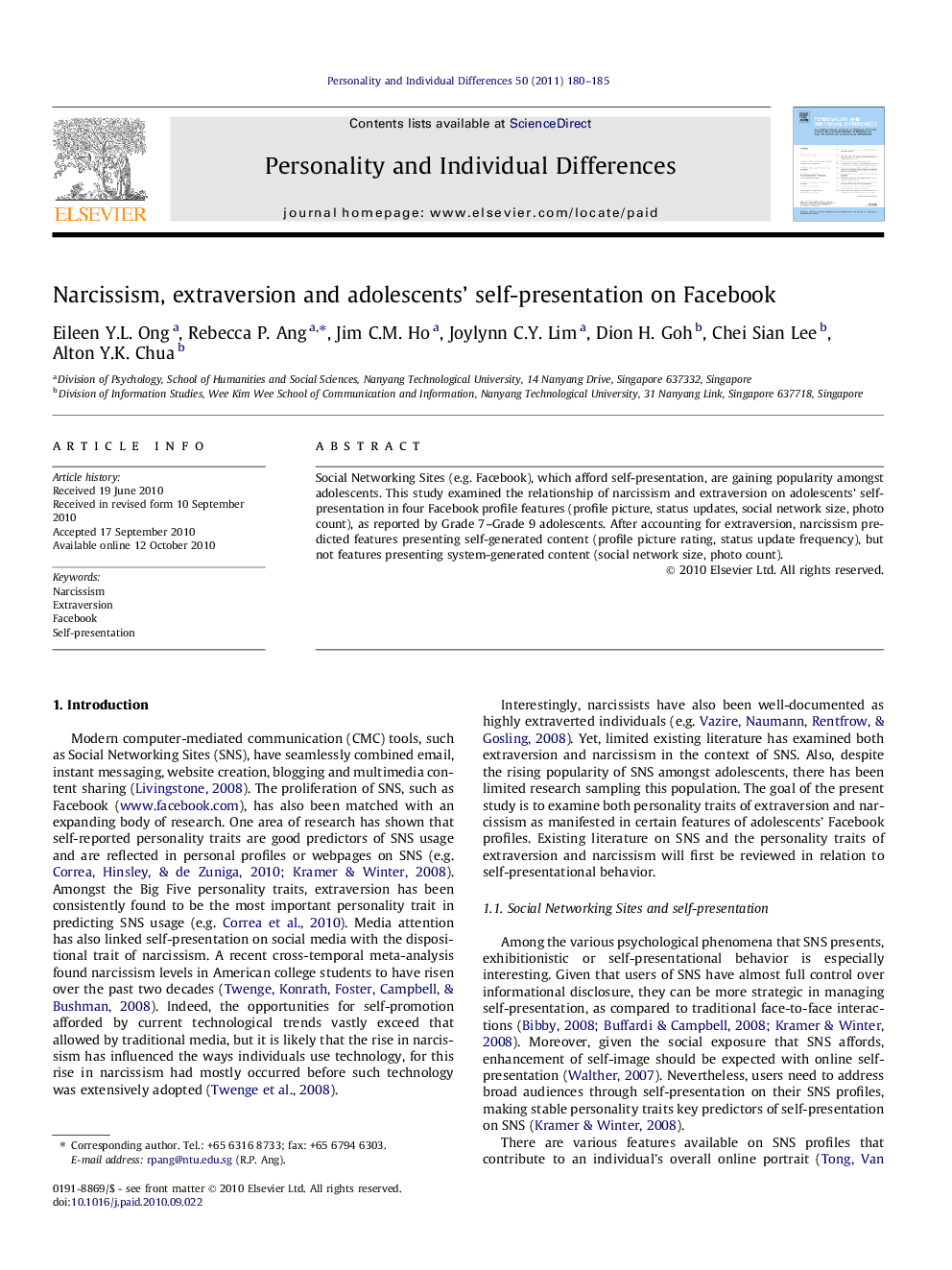 Modern computer-mediated communication (CMC) tools, such as Social Networking Sites (SNS), have seamlessly combined email, instant messaging, website creation, blogging and multimedia content sharing (Livingstone, 2008). The proliferation of SNS, such as Facebook (www.facebook.com), has also been matched with an expanding body of research. One area of research has shown that self-reported personality traits are good predictors of SNS usage and are reflected in personal profiles or webpages on SNS (e.g. Correa et al., 2010 and Kramer and Winter, 2008). Amongst the Big Five personality traits, extraversion has been consistently found to be the most important personality trait in predicting SNS usage (e.g. Correa et al., 2010). Media attention has also linked self-presentation on social media with the dispositional trait of narcissism. A recent cross-temporal meta-analysis found narcissism levels in American college students to have risen over the past two decades (Twenge, Konrath, Foster, Campbell, & Bushman, 2008). Indeed, the opportunities for self-promotion afforded by current technological trends vastly exceed that allowed by traditional media, but it is likely that the rise in narcissism has influenced the ways individuals use technology, for this rise in narcissism had mostly occurred before such technology was extensively adopted (Twenge et al., 2008). Interestingly, narcissists have also been well-documented as highly extraverted individuals (e.g. Vazire, Naumann, Rentfrow, & Gosling, 2008). Yet, limited existing literature has examined both extraversion and narcissism in the context of SNS. Also, despite the rising popularity of SNS amongst adolescents, there has been limited research sampling this population. The goal of the present study is to examine both personality traits of extraversion and narcissism as manifested in certain features of adolescents’ Facebook profiles. Existing literature on SNS and the personality traits of extraversion and narcissism will first be reviewed in relation to self-presentational behavior. 1.1. Social Networking Sites and self-presentation Among the various psychological phenomena that SNS presents, exhibitionistic or self-presentational behavior is especially interesting. Given that users of SNS have almost full control over informational disclosure, they can be more strategic in managing self-presentation, as compared to traditional face-to-face interactions (Bibby, 2008, Buffardi and Campbell, 2008 and Kramer and Winter, 2008). Moreover, given the social exposure that SNS affords, enhancement of self-image should be expected with online self-presentation (Walther, 2007). Nevertheless, users need to address broad audiences through self-presentation on their SNS profiles, making stable personality traits key predictors of self-presentation on SNS (Kramer & Winter, 2008). There are various features available on SNS profiles that contribute to an individual’s overall online portrait (Tong, Van Der Heide, Langwell, & Walther, 2008). Some of these present content generated by the profile owner (e.g. profile picture, status updates), while others present content generated by friends (e.g. wall-posts), or by the system (e.g. number of friends, number of photos). On Facebook, users typically select a profile picture to display on his or her profile page. Below the profile picture, the ‘View Photos’ link indicates the photo count that one has been tagged or identified by oneself or by others as being present in the photo, while the ‘Friends’ box displays one’s total number of friends added on Facebook. There is also a ‘wall’ on the profile page, where friends can post short messages. Users can post messages or ‘status updates’ on their own walls as frequently as they would like to. Amongst the various features, the profile picture has been posited as the most important means for self-presentation because it represents the individual in the online platform, appearing in search results and alongside every turn of online interaction such as every written wall-post (Buffardi and Campbell, 2008, Siibak, 2009 and Strano, 2008). Moreover, photos can be constructed and refined to conceal flaws (Walther, 2007). Expectedly, both college and adolescent SNS users were found to choose profile pictures in which they perceive to appear more physically attractive (Siibak, 2009 and Strano, 2008). The present study will examine four Facebook profile features – profile picture, status updates, social network size and photo count – of which the former two features present self-generated content while the latter two present system-generated content.