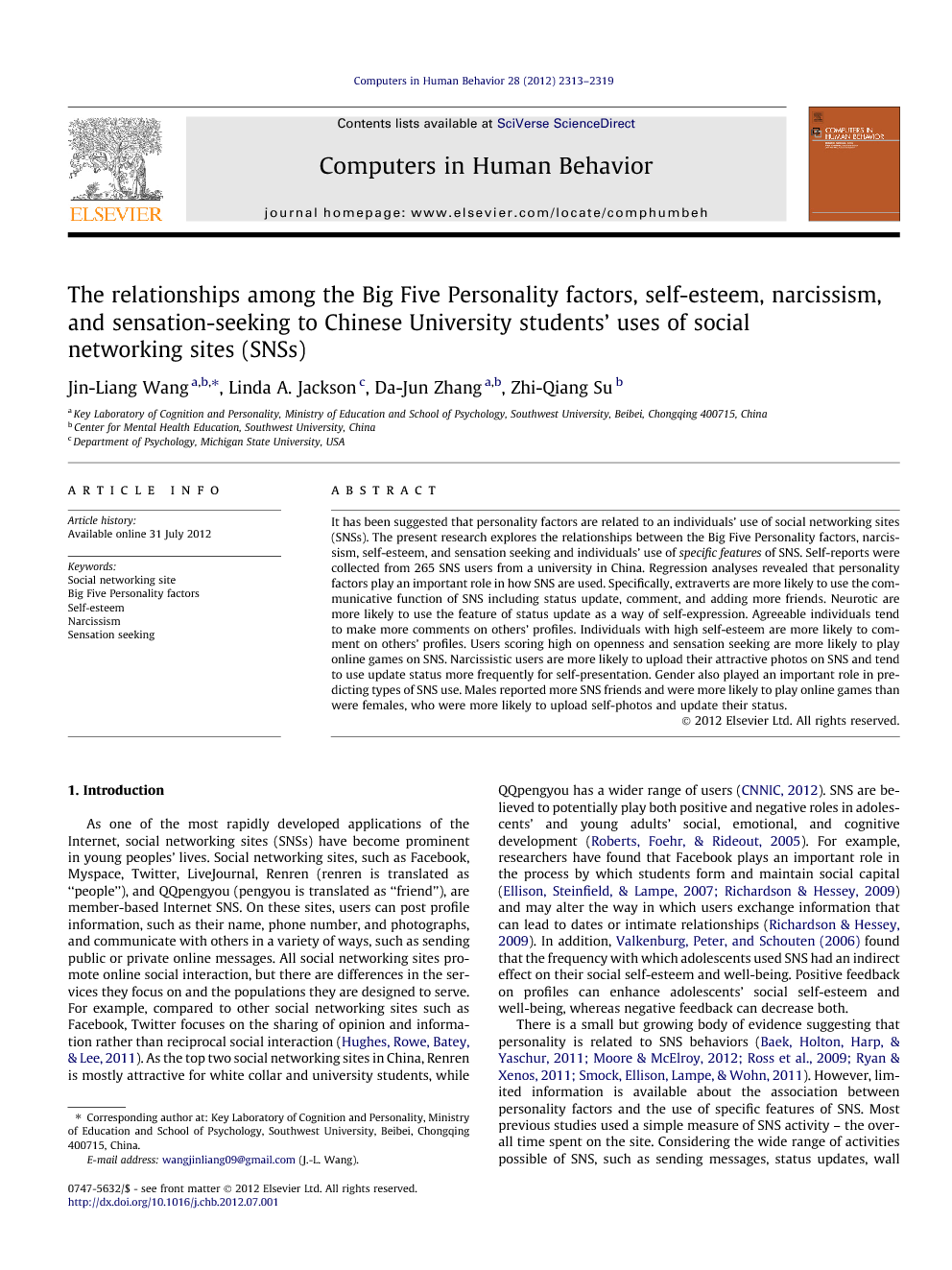 It has been suggested that personality factors are related to an individuals’ use of social networking sites (SNSs). The present research explores the relationships between the Big Five Personality factors, narcissism, self-esteem, and sensation seeking and individuals’ use of specific features of SNS. Self-reports were collected from 265 SNS users from a university in China. Regression analyses revealed that personality factors play an important role in how SNS are used. Specifically, extraverts are more likely to use the communicative function of SNS including status update, comment, and adding more friends. Neurotic are more likely to use the feature of status update as a way of self-expression. Agreeable individuals tend to make more comments on others’ profiles. Individuals with high self-esteem are more likely to comment on others’ profiles. Users scoring high on openness and sensation seeking are more likely to play online games on SNS. Narcissistic users are more likely to upload their attractive photos on SNS and tend to use update status more frequently for self-presentation. Gender also played an important role in predicting types of SNS use. Males reported more SNS friends and were more likely to play online games than were females, who were more likely to upload self-photos and update their status.

As one of the most rapidly developed applications of the Internet, social networking sites (SNSs) have become prominent in young peoples’ lives. Social networking sites, such as Facebook, Myspace, Twitter, LiveJournal, Renren (renren is translated as “people”), and QQpengyou (pengyou is translated as “friend”), are member-based Internet SNS. On these sites, users can post profile information, such as their name, phone number, and photographs, and communicate with others in a variety of ways, such as sending public or private online messages. All social networking sites promote online social interaction, but there are differences in the services they focus on and the populations they are designed to serve. For example, compared to other social networking sites such as Facebook, Twitter focuses on the sharing of opinion and information rather than reciprocal social interaction (Hughes, Rowe, Batey, & Lee, 2011). As the top two social networking sites in China, Renren is mostly attractive for white collar and university students, while QQpengyou has a wider range of users (CNNIC, 2012). SNS are believed to potentially play both positive and negative roles in adolescents’ and young adults’ social, emotional, and cognitive development (Roberts, Foehr, & Rideout, 2005). For example, researchers have found that Facebook plays an important role in the process by which students form and maintain social capital (Ellison et al., 2007 and Richardson and Hessey, 2009) and may alter the way in which users exchange information that can lead to dates or intimate relationships (Richardson & Hessey, 2009). In addition, Valkenburg, Peter, and Schouten (2006) found that the frequency with which adolescents used SNS had an indirect effect on their social self-esteem and well-being. Positive feedback on profiles can enhance adolescents’ social self-esteem and well-being, whereas negative feedback can decrease both. There is a small but growing body of evidence suggesting that personality is related to SNS behaviors (Baek et al., 2011, Moore and McElroy, 2012, Ross et al., 2009, Ryan and Xenos, 2011 and Smock et al., 2011). However, limited information is available about the association between personality factors and the use of specific features of SNS. Most previous studies used a simple measure of SNS activity – the overall time spent on the site. Considering the wide range of activities possible of SNS, such as sending messages, status updates, wall posts, and games, there is likely to be personality differences in the use of specific features of SNS as well. The present study explored the relationship between personality factors and the use of specific features of SNS. This examination is intended to provide a deeper understanding of the relationship between user characteristic and SNS use. 1.1. Renren website Renren website, whose name was changed from Xiaonei (inside University) website in August 2009, is a SNS most popular among Chinese young adults. It is estimated that there are 140 million registered users on Renren, with each user having an average of 187 friends on the site. Similar to Facebook, its initial purpose was to allow university students to create and maintain social ties that were relevant to the university experience. Renren allows users to create a profile where they can post information about themselves, such as their college, company, occupation, phone number, email address, interests, and favorite music. Renren also provides functions such as public and private messaging among users, real-time instant messaging, online games, and video sharing. These functions can satisfy users’ desire for socialization, information about current events, entertainment, and so forth. There is a ‘Friends’ box on Renren which displays the number of friends and a ‘status updates’ on the profile page where users can post short messages. Users can also upload their photos on their profile page, for friends and others to view. Users have access to all of this information about their friends, at least those who want to provide it. Users are expected to post only truthful information about themselves on their site. Renren friends are typically individuals known in the offline “real” world. Previous research has suggested that personality may be related to the use and nature of use of the Internet (Amichai-Hamburger, 2002, Amiel and Sargent, 2004 and Thayer and Ray, 2006). Most of the research has examined the effects of broad models of personality (i.e., Big Five) on Internet use. Several of the Big Five factors have been found to be related to behaviors on the Internet. The Big Five factors have also been used to investigate SNS use, as discussed next (Amichai-Hamburger and Vinitzky, 2010, Hughes et al., 2011, Ross et al., 2009 and Ryan and Xenos, 2011).

The present study examined the influences of the Big Five Personality factors, self-esteem, narcissism, sensation seeking and gender on types of SNS use. The findings are a first step toward developing a model of SNS use that will include the personal characteristics identified as important in this research and other characteristics that prove important in future research.