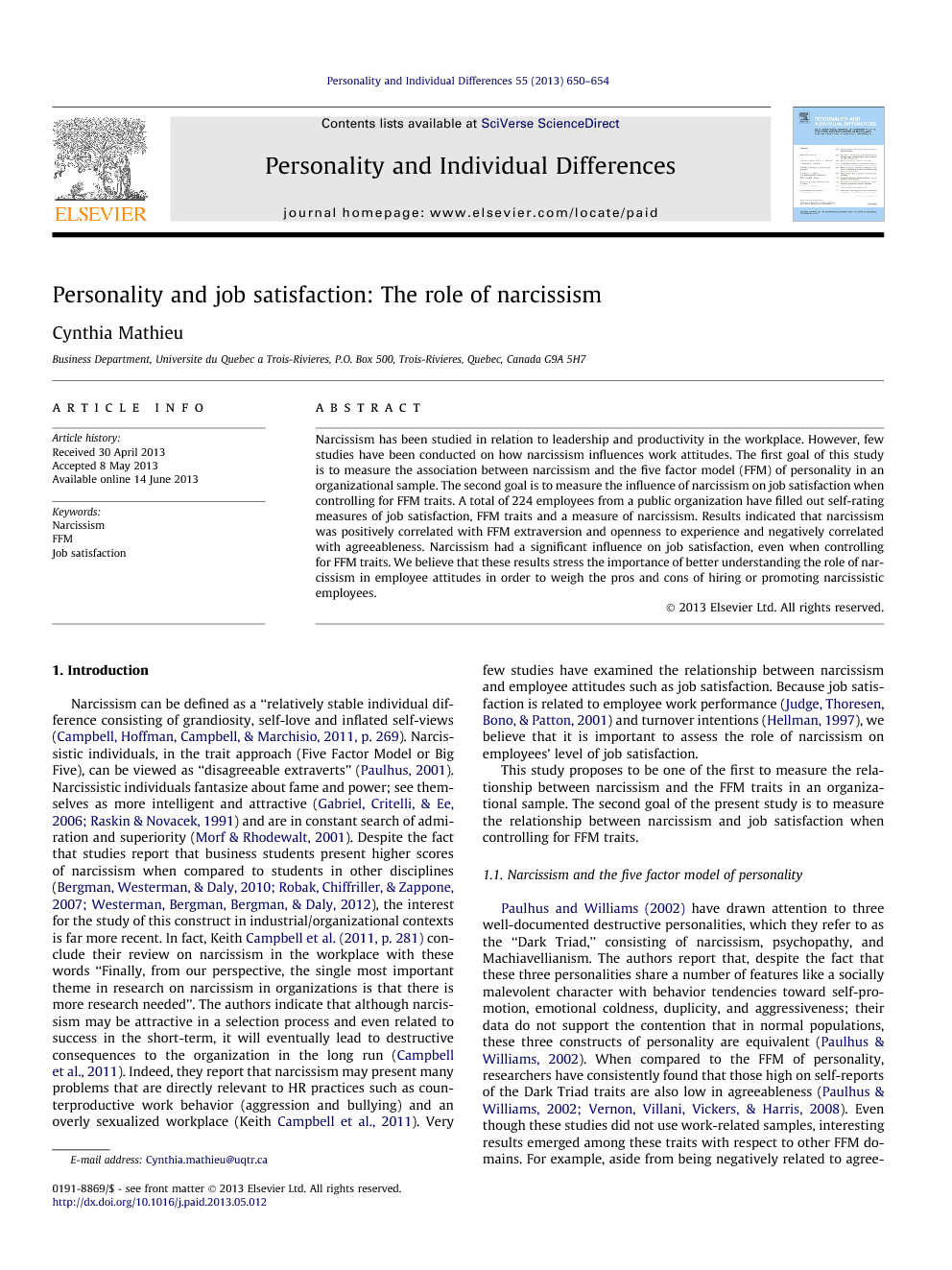 Narcissism has been studied in relation to leadership and productivity in the workplace. However, few studies have been conducted on how narcissism influences work attitudes. The first goal of this study is to measure the association between narcissism and the five factor model (FFM) of personality in an organizational sample. The second goal is to measure the influence of narcissism on job satisfaction when controlling for FFM traits. A total of 224 employees from a public organization have filled out self-rating measures of job satisfaction, FFM traits and a measure of narcissism. Results indicated that narcissism was positively correlated with FFM extraversion and openness to experience and negatively correlated with agreeableness. Narcissism had a significant influence on job satisfaction, even when controlling for FFM traits. We believe that these results stress the importance of better understanding the role of narcissism in employee attitudes in order to weigh the pros and cons of hiring or promoting narcissistic employees.

Narcissism can be defined as a “relatively stable individual difference consisting of grandiosity, self-love and inflated self-views (Campbell, Hoffman, Campbell, & Marchisio, 2011, p. 269). Narcissistic individuals, in the trait approach (Five Factor Model or Big Five), can be viewed as “disagreeable extraverts” (Paulhus, 2001). Narcissistic individuals fantasize about fame and power; see themselves as more intelligent and attractive (Gabriel et al., 2006 and Raskin and Novacek, 1991) and are in constant search of admiration and superiority (Morf & Rhodewalt, 2001). Despite the fact that studies report that business students present higher scores of narcissism when compared to students in other disciplines (Bergman et al., 2010, Robak et al., 2007 and Westerman et al., 2012), the interest for the study of this construct in industrial/organizational contexts is far more recent. In fact, Keith Campbell et al. (2011, p. 281) conclude their review on narcissism in the workplace with these words “Finally, from our perspective, the single most important theme in research on narcissism in organizations is that there is more research needed”. The authors indicate that although narcissism may be attractive in a selection process and even related to success in the short-term, it will eventually lead to destructive consequences to the organization in the long run (Campbell et al., 2011). Indeed, they report that narcissism may present many problems that are directly relevant to HR practices such as counterproductive work behavior (aggression and bullying) and an overly sexualized workplace (Keith Campbell et al., 2011). Very few studies have examined the relationship between narcissism and employee attitudes such as job satisfaction. Because job satisfaction is related to employee work performance (Judge, Thoresen, Bono, & Patton, 2001) and turnover intentions (Hellman, 1997), we believe that it is important to assess the role of narcissism on employees’ level of job satisfaction. This study proposes to be one of the first to measure the relationship between narcissism and the FFM traits in an organizational sample. The second goal of the present study is to measure the relationship between narcissism and job satisfaction when controlling for FFM traits.