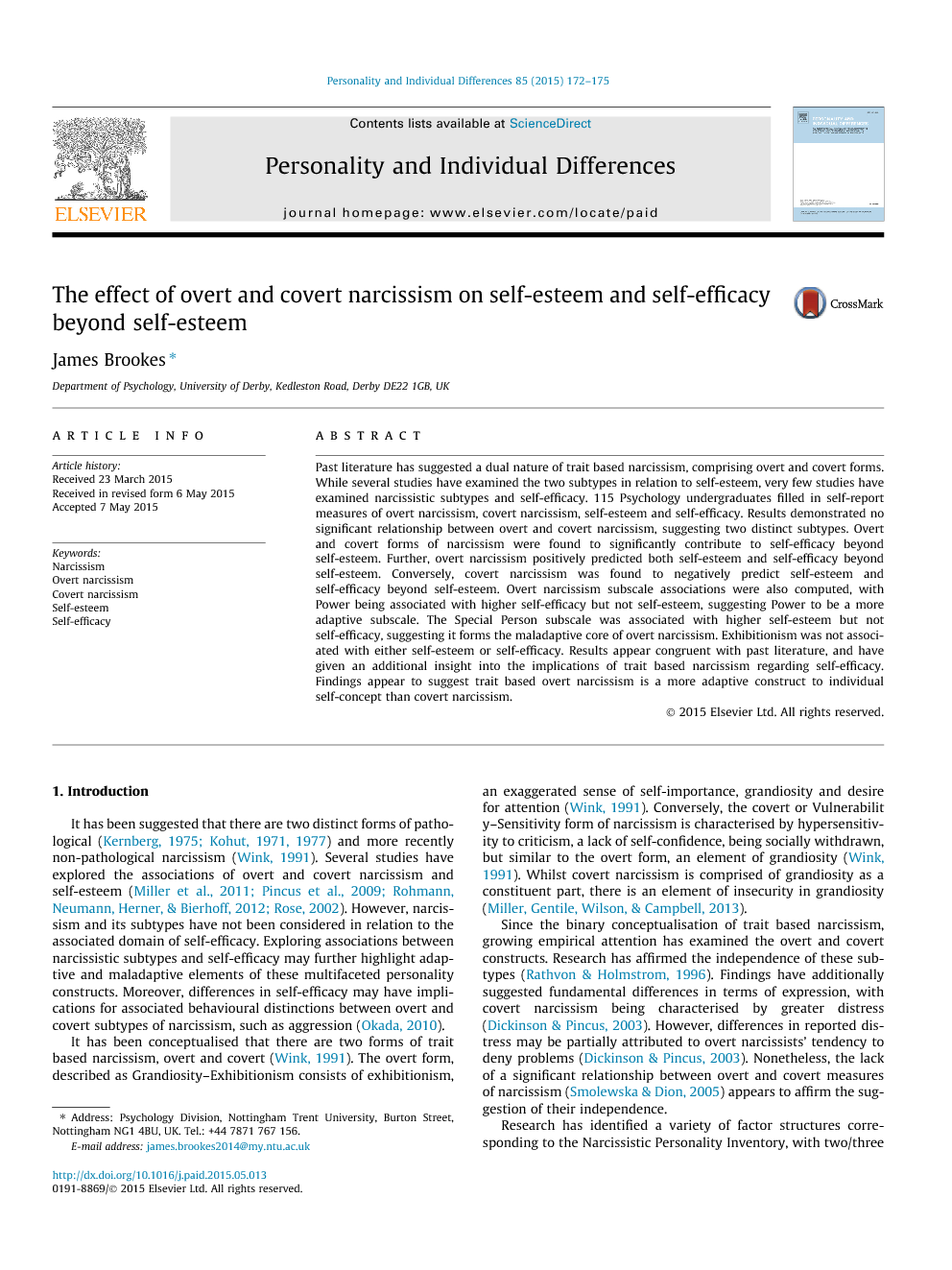 It has been suggested that there are two distinct forms of pathological (Kernberg, 1975, Kohut, 1971 and Kohut, 1977) and more recently non-pathological narcissism (Wink, 1991). Several studies have explored the associations of overt and covert narcissism and self-esteem (Miller et al., 2011, Pincus et al., 2009, Rohmann et al., 2012 and Rose, 2002). However, narcissism and its subtypes have not been considered in relation to the associated domain of self-efficacy. Exploring associations between narcissistic subtypes and self-efficacy may further highlight adaptive and maladaptive elements of these multifaceted personality constructs. Moreover, differences in self-efficacy may have implications for associated behavioural distinctions between overt and covert subtypes of narcissism, such as aggression (Okada, 2010). It has been conceptualised that there are two forms of trait based narcissism, overt and covert (Wink, 1991). The overt form, described as Grandiosity–Exhibitionism consists of exhibitionism, an exaggerated sense of self-importance, grandiosity and desire for attention (Wink, 1991). Conversely, the covert or Vulnerability–Sensitivity form of narcissism is characterised by hypersensitivity to criticism, a lack of self-confidence, being socially withdrawn, but similar to the overt form, an element of grandiosity (Wink, 1991). Whilst covert narcissism is comprised of grandiosity as a constituent part, there is an element of insecurity in grandiosity (Miller, Gentile, Wilson, & Campbell, 2013). Since the binary conceptualisation of trait based narcissism, growing empirical attention has examined the overt and covert constructs. Research has affirmed the independence of these subtypes (Rathvon & Holmstrom, 1996). Findings have additionally suggested fundamental differences in terms of expression, with covert narcissism being characterised by greater distress (Dickinson & Pincus, 2003). However, differences in reported distress may be partially attributed to overt narcissists’ tendency to deny problems (Dickinson & Pincus, 2003). Nonetheless, the lack of a significant relationship between overt and covert measures of narcissism (Smolewska & Dion, 2005) appears to affirm the suggestion of their independence. Research has identified a variety of factor structures corresponding to the Narcissistic Personality Inventory, with two/three (Kubarych, Deary, & Austin, 2004), four (Emmons, 1984) and even seven (Raskin & Terry, 1988) factors being suggested. The four and seven factor solutions have been derived exclusively through Principal Components Analysis (Emmons, 1984 and Raskin and Terry, 1988). Conversely, the two and three factor solutions were additionally explored using Confirmatory Factor Analysis, with the three factor solution demonstrating the best fit (Kubarych et al., 2004). Therefore, the present research will consider the three subscales of Power, Exhibitionism and Special Person identified in Kubarych et al. (2004). Psychoanalytic perspectives have identified pathological narcissism as a defensive grandiosity in compensation for underlying feelings of inferiority (Kernberg, 1975). Alternatively, social learning perspectives have suggested that narcissism consists of genuine underlying beliefs of superiority (Millon, 1981). Given these alternate suggestions of self-concept regarding pathological narcissism, it is unsurprising that research has extended to trait based narcissism and self-esteem. Self-esteem can be defined as the view people have of themselves; whether they view themselves to be a good and valuable person or not (Kernis, 2003). Higher overt narcissism has been associated with higher self-esteem, with covert narcissism being conversely associated with lower self-esteem (Miller et al., 2011, Pincus et al., 2009, Rohmann et al., 2012 and Rose, 2002). Thus, findings may be interpreted as suggesting that regarding individual self-concept, overt narcissism is a more adaptive construct than covert narcissism. Equally, subscale level associations with self-esteem have been explored, with the Special Person and Power subscales being associated with increased self-esteem (Brunell, Staats, Barden, & Hupp, 2011). Conversely, no significant association has been found between Exhibitionism and self-esteem (Brunell et al., 2011). This demonstrates differing subscale effects which may be suppressed if total scale scores are exclusively considered. Another element within the domain of self-concept is self-efficacy. Self-efficacy can be defined as how people judge their ability to both organise and carry out tasks (Bandura, 1986). Moreover, as a concept it has implications for feelings, thoughts, motivation and in turn, behaviour (Bandura, 1994). Self-efficacy can be influenced by whether or not success in tasks is achieved, hence may vary depending on recent events (Andersson, Moore, Hensing, Krantz, & Staland-Nyman, 2014). In this respect, self-efficacy bears similarity to self-esteem which is liable to fluctuation in response to life events, especially in narcissistic individuals (Morf & Rhodewalt, 2001). It has been identified that self-esteem and self-efficacy are distinct, but related concepts which are moderately correlated (Brown, Hoye, & Nicholson, 2012). The similarity between self-efficacy and self-esteem may suggest that self-efficacy is likely to differ between narcissistic subtypes. Despite there having been several studies examining narcissistic subtypes and self-esteem, research has not considered narcissism in relation to self-efficacy. Exploring self-efficacy in relation to narcissism may further expand understandings of differences between narcissistic subtypes and shed more light on the variation in self-concept associated with the differing presentations of narcissism. This study examined overt narcissism, covert narcissism, self-esteem and self-efficacy. Due to self-esteem being moderately correlated to self-efficacy, it appeared appropriate to consider the impact of overt and covert narcissism on self-efficacy, beyond the variance accounted for by self-esteem. The aims for the study were to (i) assess the relationship between overt and covert narcissism, (ii) assess overt and covert narcissism’s link to self-esteem, and (iii) assess whether overt and covert narcissism independently predicted self-efficacy, beyond self-esteem. To further explore specific facets of overt narcissism, Narcissistic Personality Inventory subscale analyses were also computed.