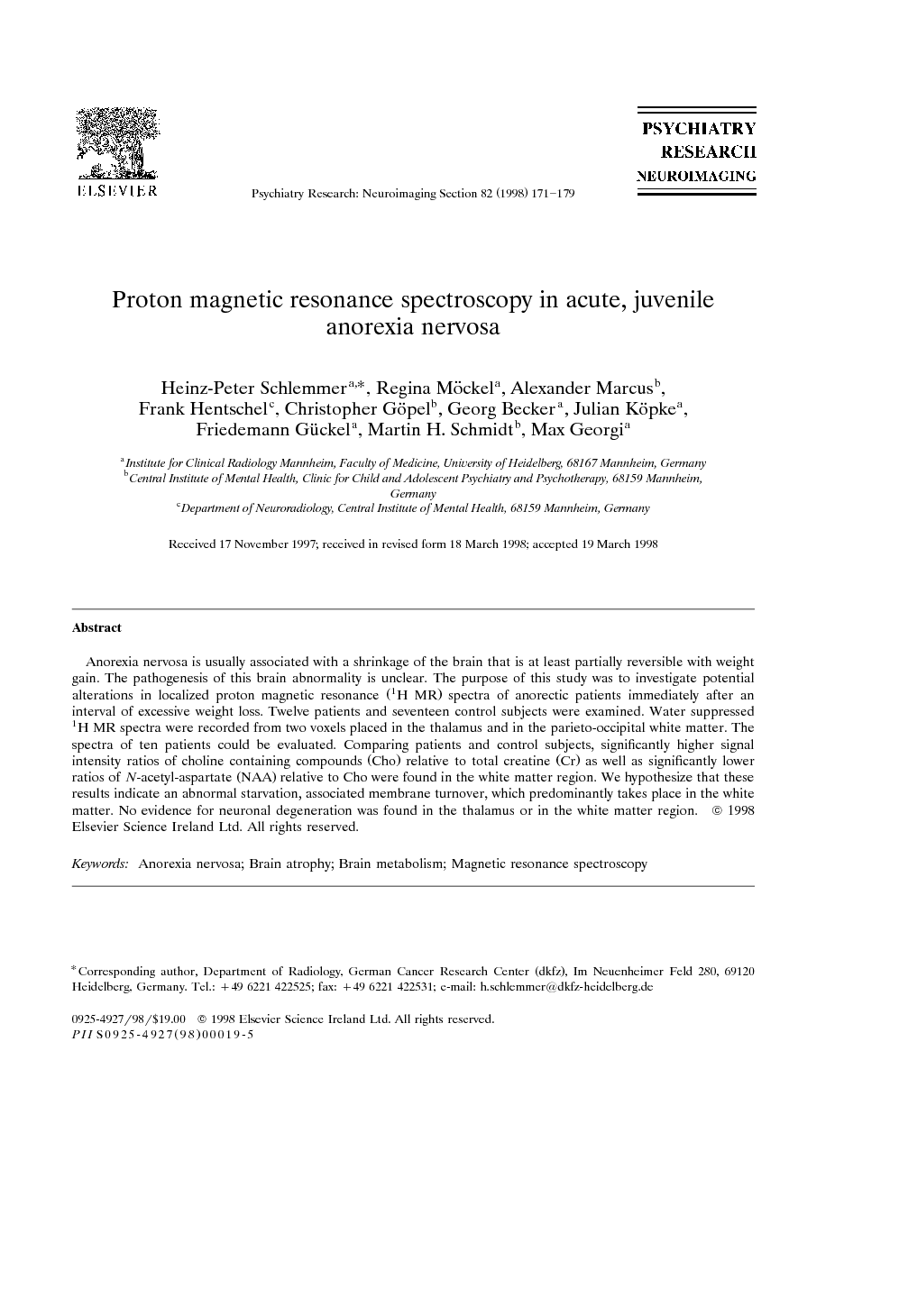 Anorexia nervosa is usually associated with a shrinkage of the brain that is at least partially reversible with weight gain. The pathogenesis of this brain abnormality is unclear. The purpose of this study was to investigate potential alterations in localized proton magnetic resonance (1H MR) spectra of anorectic patients immediately after an interval of excessive weight loss. Twelve patients and seventeen control subjects were examined. Water suppressed 1H MR spectra were recorded from two voxels placed in the thalamus and in the parieto-occipital white matter. The spectra of ten patients could be evaluated. Comparing patients and control subjects, significantly higher signal intensity ratios of choline containing compounds (Cho) relative to total creatine (Cr) as well as significantly lower ratios of N-acetyl-aspartate (NAA) relative to Cho were found in the white matter region. We hypothesize that these results indicate an abnormal starvation, associated membrane turnover, which predominantly takes place in the white matter. No evidence for neuronal degeneration was found in the thalamus or in the white matter region.

Anorexia nervosa is an eating disorder characterized by an abnormally low body weight achieved by self-starvation. It affects predominantly female adolescents (sex ratio is approx. 10:1 in female/male). In teenaged girls it is the third most common chronic disease with an estimated mortality of 5–10% (Mitchell, 1986). Symptoms usually occur at the age of approximately 15 years (Crisp et al., 1976 and Marcus et al., 1989). Its most striking features are an intense pre-occupation with weight and body shape and a relentless pursuit of thinness. According to the DSM IV (Diagnostic and Statistical Manual of Mental Disorders), two subtypes of anorexia nervosa are differentiated; a restricting type without regularly binge-eating or purging behavior and a binge-eating/purging type with self-induced vomiting or misuse of laxatives, diuretics or enemas (American Psychiatric Association, 1994). During the course of their disease, anorectics may develop atrophic brain abnormalities with an enlargement of the cerebrospinal fluid spaces. These abnormalities are, for the most part, completely reversible after weight gain. Thus, in earlier reports the term ``pseudoatrophia'' was proposed to characterize the reversibility of this process, although this has not been established in the chronic course of anorexia nervosa (Sein et al., 1981 and Kohlmeyer et al., 1983). The morphological bases of these radiological changes, as well as their implications for pathogenesis and course, remain unclear (Hentschel et al., 1995). Using magnetic resonance imaging, Lambe et al. (1997)recently reported persistent gray matter volume deficits in subjects with anorexia nervosa after weight gain. Postmortem investigations in a case of anorexia nervosa with fatal outcome demonstrated a decrease in the number of neuronal spines and reduced lengths of dendrites in the frontal lobes (Schönheit et al., 1996). In vivo proton magnetic resonance spectroscopy (1H MRS) provides important insights into brain metabolism under normal and pathologic conditions (Ross and Michaelis, 1994 and Frahm and Hanefeld, 1996). Preliminary data of 1H MRS in the brain of patients with anorexia nervosa reported by other investigators and our group revealed contradictory results (Hanefeld et al., 1993, Roser et al., 1996, Schlemmer et al., 1996 and Schlemmer et al., 1997). This study was designed to search for metabolic changes in the brain of patients with anorexia nervosa immediately after an interval of excessive weight loss.