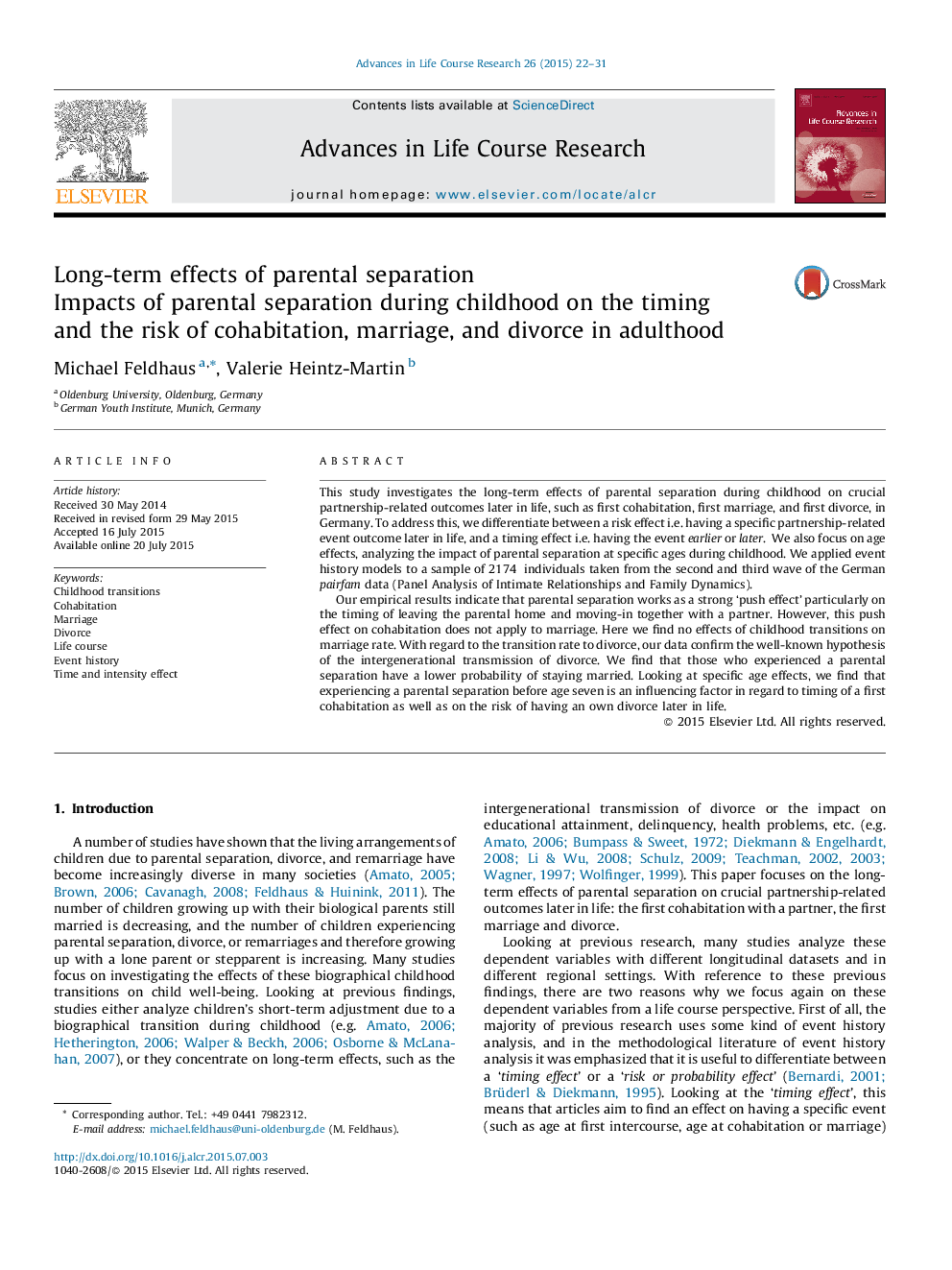 Abstract This study investigates the long-term effects of parental separation during childhood on crucial partnership-related outcomes later in life, such as first cohabitation, first marriage, and first divorce, in Germany. To address this, we differentiate between a risk effect i.e. having a specific partnership-related event outcome later in life, and a timing effect i.e. having the event earlier or later. We also focus on age effects, analyzing the impact of parental separation at specific ages during childhood. We applied event history models to a sample of 2174 individuals taken from the second and third wave of the German pairfam data (Panel Analysis of Intimate Relationships and Family Dynamics). Our empirical results indicate that parental separation works as a strong ‘push effect’ particularly on the timing of leaving the parental home and moving-in together with a partner. However, this push effect on cohabitation does not apply to marriage. Here we find no effects of childhood transitions on marriage rate. With regard to the transition rate to divorce, our data confirm the well-known hypothesis of the intergenerational transmission of divorce. We find that those who experienced a parental separation have a lower probability of staying married. Looking at specific age effects, we find that experiencing a parental separation before age seven is an influencing factor in regard to timing of a first cohabitation as well as on the risk of having an own divorce later in life.

1. Introduction A number of studies have shown that the living arrangements of children due to parental separation, divorce, and remarriage have become increasingly diverse in many societies (Amato, 2005, Brown, 2006, Cavanagh, 2008 and Feldhaus and Huinink, 2011). The number of children growing up with their biological parents still married is decreasing, and the number of children experiencing parental separation, divorce, or remarriages and therefore growing up with a lone parent or stepparent is increasing. Many studies focus on investigating the effects of these biographical childhood transitions on child well-being. Looking at previous findings, studies either analyze children's short-term adjustment due to a biographical transition during childhood (e.g. Amato, 2006, Hetherington, 2006, Walper and Beckh, 2006 and Osborne and McLanahan, 2007), or they concentrate on long-term effects, such as the intergenerational transmission of divorce or the impact on educational attainment, delinquency, health problems, etc. (e.g. Amato, 2006, Bumpass and Sweet, 1972, Diekmann and Engelhardt, 2008, Li and Wu, 2008, Schulz, 2009, Teachman, 2002, Teachman, 2003, Wagner, 1997 and Wolfinger, 1999). This paper focuses on the long-term effects of parental separation on crucial partnership-related outcomes later in life: the first cohabitation with a partner, the first marriage and divorce. Looking at previous research, many studies analyze these dependent variables with different longitudinal datasets and in different regional settings. With reference to these previous findings, there are two reasons why we focus again on these dependent variables from a life course perspective. First of all, the majority of previous research uses some kind of event history analysis, and in the methodological literature of event history analysis it was emphasized that it is useful to differentiate between a ‘timing effect’ or a ‘risk or probability effect’ ( Bernardi, 2001 and Brüderl and Diekmann, 1995). Looking at the ‘timing effect’, this means that articles aim to find an effect on having a specific event (such as age at first intercourse, age at cohabitation or marriage) earlier or later, which means at younger ages compared with a control group. The second one, the ‘risk or probability effect’, is the strategy of investigating whether a certain type of biographical transition occurs later in life or not, such as being married or being divorced. Both effects are very different in their interpretation and very important in regard to life course research. Looking now at previous research we see that in many studies where event history analysis is used both effects, the timing and the risk effects, are dependent from each other, which means that due to the type of parametric modeling a specific parameter determines both, the timing and the risk effect. This leads to the situation that this kind of modeling does not allow to differentiate exactly between the timing and risk effect. Using, for example, the standard log-logistic model (or other parametric models), which is often applied for this kind of research, it is not possible to separate both effects exactly. But with reference to a study done by Brüderl and Diekmann (1995) we will show in this paper that the differentiation between a timing and a risk or probability effect is very useful and can be done in an appropriate way by using some specific kind of event history analysis. Thus, our first motivation is a methodological contribution to differentiate more exactly between the timing and the risk effect and how it can be done by using event history analysis. The second motivation is based on a content-related deficit in regard to this kind of research. The data we used here are from the German Family Panel (Hunink et al., 2011). This rich dataset expand our opportunities to analyze the first cohabitation, first marriage and divorce, depending on the experience of a parental separation during childhood. While the hypothesis of the intergenerational transmission of divorce is well documented (see e.g. Amato, 1996, Bumpass and Sweet, 1972, Diekmann and Engelhardt, 1999, Dronkers and Härkönen, 2008, Glenn and Kramer, 1987, Martin et al., 2005, Pope and Mueller, 1976 and Wagner, 1997), less is known whether the age of the child at parental divorce matters for later partnership specific outcomes, or not. There are contradictory results in previous research (Amato, 1996, Diekmann and Engelhardt, 2008 and Teachman, 2003). The data used here gives us the opportunity to control for this kind of age effects which gives us a better understanding of path dependencies between different age-periods and outcomes in later life