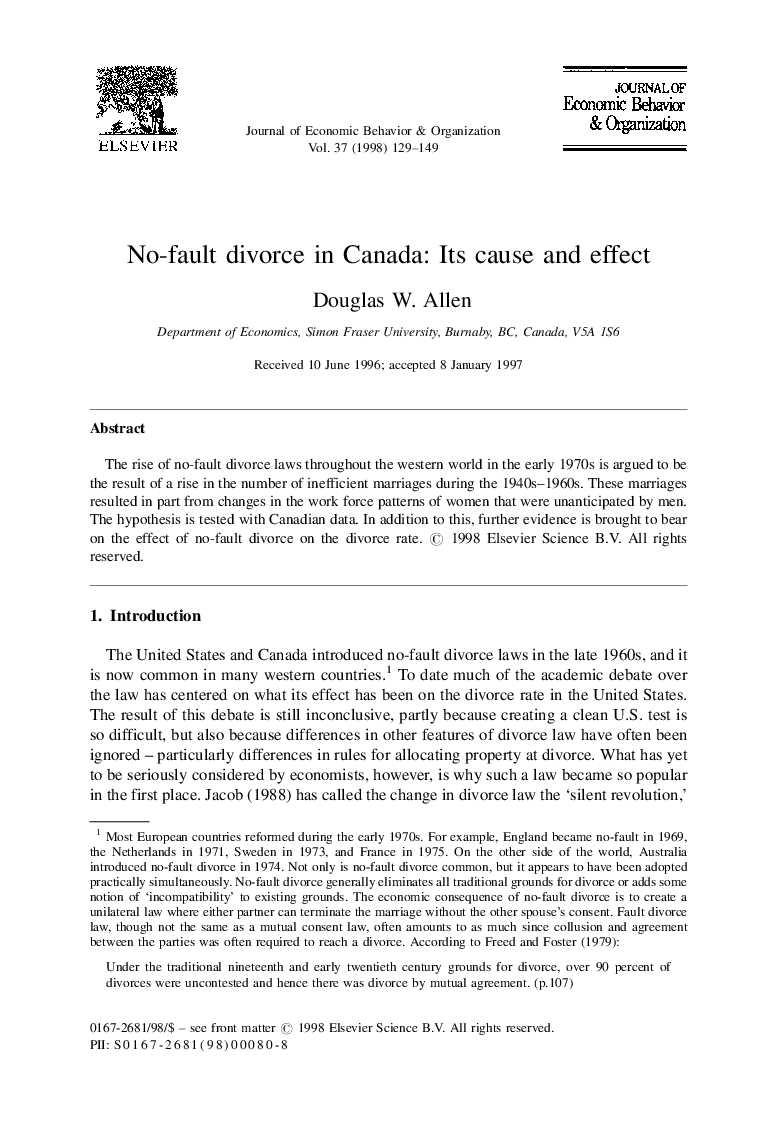 Abstract The rise of no-fault divorce laws throughout the western world in the early 1970s is argued to be the result of a rise in the number of inefficient marriages during the 1940s–1960s. These marriages resulted in part from changes in the work force patterns of women that were unanticipated by men. The hypothesis is tested with Canadian data. In addition to this, further evidence is brought to bear on the effect of no-fault divorce on the divorce rate.

. Introduction The United States and Canada introduced no-fault divorce laws in the late 1960s, and it is now common in many western countries.1 To date much of the academic debate over the law has centered on what its effect has been on the divorce rate in the United States. The result of this debate is still inconclusive, partly because creating a clean U.S. test is so difficult, but also because differences in other features of divorce law have often been ignored – particularly differences in rules for allocating property at divorce. What has yet to be seriously considered by economists, however, is why such a law became so popular in the first place. Jacob (1988)has called the change in divorce law the `silent revolution,' and holds that no-fault divorce virtually came about by accident, or at least as an unconsidered consequence of efforts to make the divorce process more honest and open. Posner (1992, p. 252) provides a similar explanation, stating that “confining divorce to grounds… [leads to investing]… resources in manufacturing them. … At this point internal goals of the legal system – the goals of economizing on judicial resources and of reducing perjury – become decisive in favor of allowing either consensual divorce or divorce at will.” As a historical fact, efforts to reduce judicial resources and perjury may well have been the grounds by which some countries arrived at no-fault divorce law. However, this cannot explain why no-fault divorce laws have survived. If it were the case, as many have claimed (see, e.g. Parkman, 1992a), that no-fault divorce imposed unexpected costs on third parties (e.g. spouses and children) that were greater than any benefits, then it would not matter if that law was arrived at willy-nilly, as a matter of patch-work routine, as a method of reducing perjury, or as the result of local special interests. Efficiency within the legal process would lead to such a law being revoked, not enforced or modified, and certainly not adopted by other jurisdictions. Yet no-fault divorce is common place. Indeed, even the character of the law remains unchanged: the 1985 no-fault divorce law of South Dakota is in the same spirit as the 1970 law of California; the U.S. law is similar in spirit to the law in Canada. In those U.S. states where marital property was divided based on legal title, and where most of the non-voluntary wealth transfers from wives to husbands took place after the introduction of no-fault divorce due to the tendency of husbands holding legal title, the law was not repealed.2 Rather, changes were made in the other areas of the divorce law, most notably property division, and the no-fault process was retained. Hence, despite the silent or accidental appearance given the acquisition of these laws, their rapid spread and resistance to repeal suggests, or at least is consistent with, their being efficient.3 In this paper I argue that no-fault divorce laws were motivated by efficiency. In particular, I argue that due to social changes after the second World War, there were increases in the number of inefficient marriages, 4 and that the change in the divorce law reduced the cost of being married by making it easier to escape a past mistake. Unfortunately, no law is perfect, and the elimination of fault grounds for divorce solved some problems, but created others. Just as there are inefficient marriages under fault law, there are also inefficient divorces under no-fault law. 5 In both cases, transaction costs arise as some spouses exploit the laws to their favor. The hypothesis here is that the law was, and continues to be, chosen to maximize the gains from trade net of transaction costs. 6 Aside from providing a theoretical explanation for the change in divorce laws, an effort is made to test the hypothesis using a detailed analysis of the Canadian experience with no-fault divorce. Unlike other empirical approaches to this question, an attempt is made to segregate the effect of no-fault divorce on efficient and inefficient divorces. Hence, in the process of explaining the emergence of this law, further evidence on its effect is provided as well. For several reasons, this second aspect of the paper is an important contribution to the debate on the effect of no-fault divorce. First, to date, the no-fault divorce debate has taken place almost entirely in an American context, and the time has come for broader testing. Second, unlike the US, the Canada Divorce Act is a federal law. As a result, there is a clear change in the law and problems of legal definition are avoided. In the divorce literature there is still disagreement over the classification of several state laws, and the cross-sectional results on the effect of no-fault laws on the divorce rate turn out to be very sensitive to state classifications.7 Finally, demonstrating that no-fault divorce did raise the divorce rate in Canada highlights the puzzle of the initial question of this paper, namely, why would a law be introduced and maintained that increased the incidence of divorce? The paper is organized as follows. Section 2provides a brief discussion on the notion of efficient and inefficient marriages, and introduces the metaphor `marriage as a contract,' which may not be familiar to all readers. Section 3then briefly discusses economic theories of divorce in order to direct the inquiry as to what would cause a large rise in the number of inefficient marriages that would motivate demand for legal reform. This section settles on changes in the level and type of female labor force participation as the main driving factor. Finally, Section 4tests the hypothesis over the cause of no-fault divorce, and provides estimates of its effect as well.

5. Conclusion What is at fault for no-fault, and what was its effect? I have argued that the change in law was motivated by a rise in the number of inefficient marriages throughout the 1950s and 1960s, which resulted in part from changes in the work patterns of women that were unanticipated by men. These were marriages in which the partners erred in estimating the future contributions of their spouse, but in which transaction costs prevented a divorce from occurring. Under no-fault divorce, the cost of obtaining a divorce falls, and what were previously inefficient marriages become efficient divorces. For different transaction cost reasons some efficient marriages also end in divorce under the no-fault law. Looking back at Fig. 1, the analysis here can provide a crude explanation for why the divorce rate jumped up in 1968, rose and then began to gradually fall, and then jumped up again in 1985. The jump in 1968 has been dealt with, and the rise over the next several years resulted from the 5-year separation requirement. That is, the initial increase in divorces was made by people that were separated prior to the change in the law. In 1968 those that had been separated for at least 5-years could divorce, in 1969 those that had been separated for 4 years in 1968 divorced, and so on. However, the gradual fall is probably the result of a fall in inefficient divorces. As the new law becomes known, individuals make adjustments in factors such as searching for spouses, age at marriage, delineation of assets, and pre-nuptial agreements that reduce the probability of an inefficient divorce. The divorce rate does not fall to the 1968 level because there has been a permanent increase in difficulty to identify women who will have work patterns that make the gains to marriage low, and so there will be a larger number of efficient divorces than prior to 1968. In fact, the higher steady-state divorce rate that exists almost 25 years after the legal change, is perhaps the strongest evidence for the existence of efficient divorces. The jump in 1985 was the result of lowering the separation time to 1 year, which mimics, to a smaller degree, all of the 1968 effects. Ceteris paribus, the argument presented here would predict a fall in the divorce rate over time from 1985, to a level that is still higher than the pre-1968 level. To summarize the key empirical findings, the no-fault law variables were statistically different from zero and positive. This held true for the results from the Family History Survey and from a panel created from Vital Statistics. However, the paper also provided some evidence that the law had a more subtle impact. The interaction between the no-fault dummy and the mistake variables in Table 4 indicates that the switch in law induced efficient divorces as well as inefficient ones. This distinction between the two types of divorces may explain the paradox that while casual observation suggests that the switch in law mattered, some early empirical tests had claimed that it did not. In any event, a perhaps more important underlying theme to this paper, and one that could be exploited in subsequent work, is that the switch to no-fault divorce was no accident, but was rather the response to economic forces.