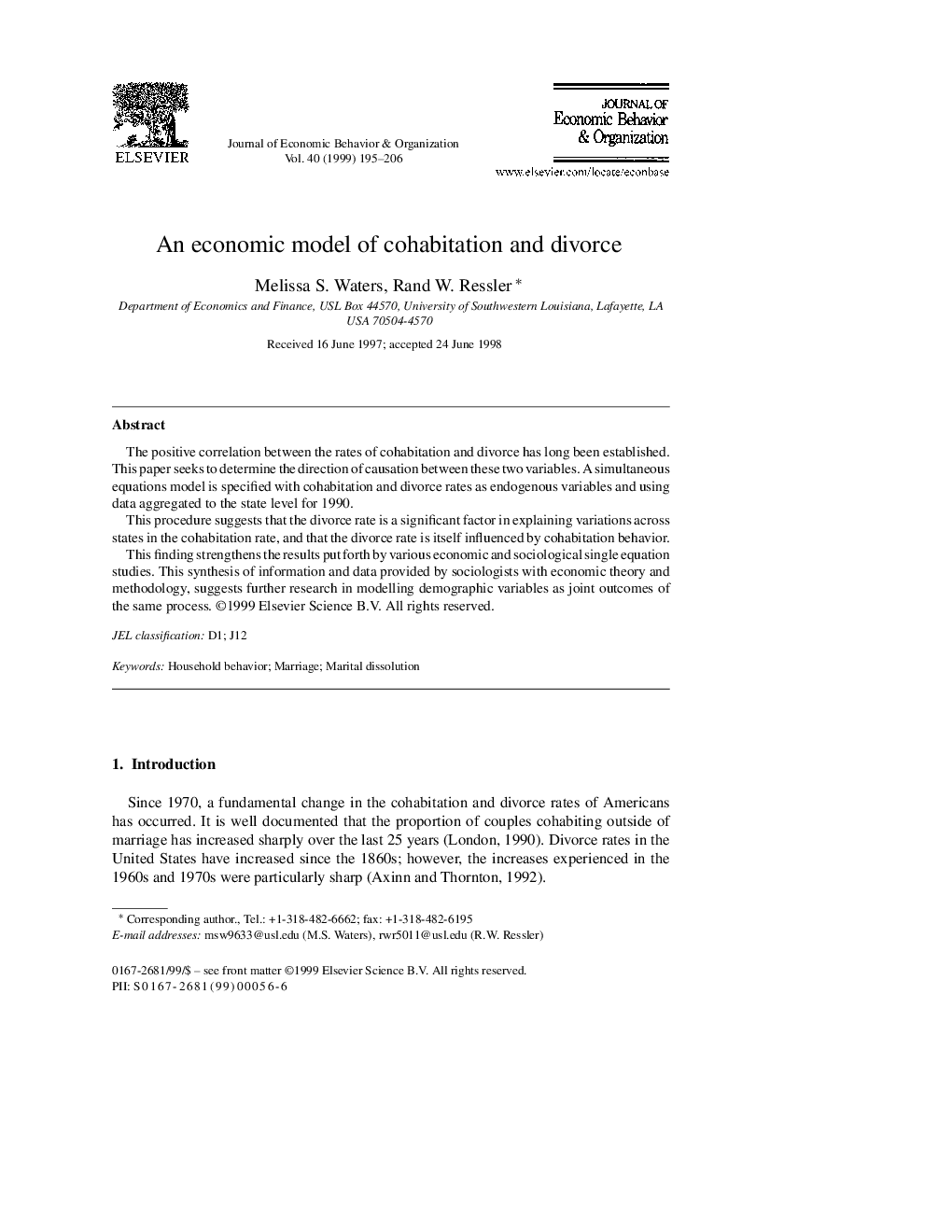 Abstract The positive correlation between the rates of cohabitation and divorce has long been established. This paper seeks to determine the direction of causation between these two variables. A simultaneous equations model is specified with cohabitation and divorce rates as endogenous variables and using data aggregated to the state level for 1990. This procedure suggests that the divorce rate is a significant factor in explaining variations across states in the cohabitation rate, and that the divorce rate is itself influenced by cohabitation behavior. This finding strengthens the results put forth by various economic and sociological single equation studies. This synthesis of information and data provided by sociologists with economic theory and methodology, suggests further research in modelling demographic variables as joint outcomes of the same process.

1. Introduction Since 1970, a fundamental change in the cohabitation and divorce rates of Americans has occurred. It is well documented that the proportion of couples cohabiting outside of marriage has increased sharply over the last 25 years (London, 1990). Divorce rates in the United States have increased since the 1860s; however, the increases experienced in the 1960s and 1970s were particularly sharp (Axinn and Thornton, 1992). Most studies of these changes have been conducted by sociologists who have established many reliable correlates relating to union formation and dissolution. A theoretical foundation which explains these relationships, however, has yet to be found. Axinn and Thornton (1992) addressed the issue of causality between cohabitation and divorce, albeit in a single equation context which does not allow valid statistical inferences on causality. Intuitively, one might view cohabitation as a trial marriage, with successful trials followed by formal marriage. If this is true, then marriages preceded by cohabitation might be presumed to be more stable, and thus, to be associated with a lower probability of divorce. Interestingly, however, several researchers have found the opposite to be true: cohabitation prior to marriage is associated with higher divorce rates. 1 Does this observed positive relationship represent a true, independent impact of cohabitation on subsequent divorce probability? Or is it possible that the observed positive effect is not causal, but merely reflects the fact that individuals who choose to cohabit prior to marriage are also more accepting of divorce, and thus, are more likely to divorce subsequently? These are the questions that Axinn and Thornton (1993) attempted to address. Based on their empirical analysis, they found evidence supporting both the possible interpretations. Their results are open to question, however. Due to the young ages of the participants in the panel data used for the study, actual divorce behavior of the participants was not observed. This prevented the authors from “examining the extent to which the factors identified can account for the relationship between cohabitation and divorce”. (p. 360). Has the rising divorce rate caused a preference shift away from the more formal institution of marriage and toward the less formal cohabitational union? On the other hand, might an increased preference toward cohabiting be a causal factor explaining increased acceptance of divorce? Is it plausible that causality runs in both the directions? In this paper we present a simultaneous equations estimation procedure which provides for valid statistical inferences regarding the direction(s) of causality between the divorce rate and the cohabitation rate. Using Census data on cohabitation and divorce rates by state for 1990,2 the model is estimated by Two Stage Least Squares. Section 2 contains a review of the literature on cohabitation, and summarizes the economic studies on divorce. Section 3 describes the simultaneous model to be estimated, and Section 4 presents the estimation results. Finally, Section 5 provides a brief summary and conclusion.

5. Conclusions This paper provides some insight into the changing process of union formation and dissolution. Two of the most important demographic variables involved are the divorce rate and the cohabitation rate. Previous models have either not addressed, or have not adequately accounted for, the issue of causality between rising divorce probability and the shift in union formation behavior away from marriage and toward cohabitation. Using state-wide data for 1990, this paper specifies and estimates a simultaneous system in which divorce and cohabitation rates are jointly endogenous. Empirical results appear to confirm the existence of two-way causality. These results suggest that higher divorce rates, and the marital instability they imply, may shift union formation behavior away from marriage and toward cohabitation. The cohabitational union, however, is of relatively short duration, and most individuals who cohabit will eventually marry either their cohabitational partner or someone else. Thus, at the same time, these results also suggest that the trend toward cohabiting may itself be causal in increasing marital instability through increasing the probability of future divorce. The findings in this paper indicate that economic analysis can contribute significantly to the understanding of basic demographic processes. Changes in these processes affect male and female participation in market work and household work, investments in human capital, and fertility behavior. Although tentative, the conclusions presented here suggest that further research should attempt to model demographic variables as joint outcomes of the same process.