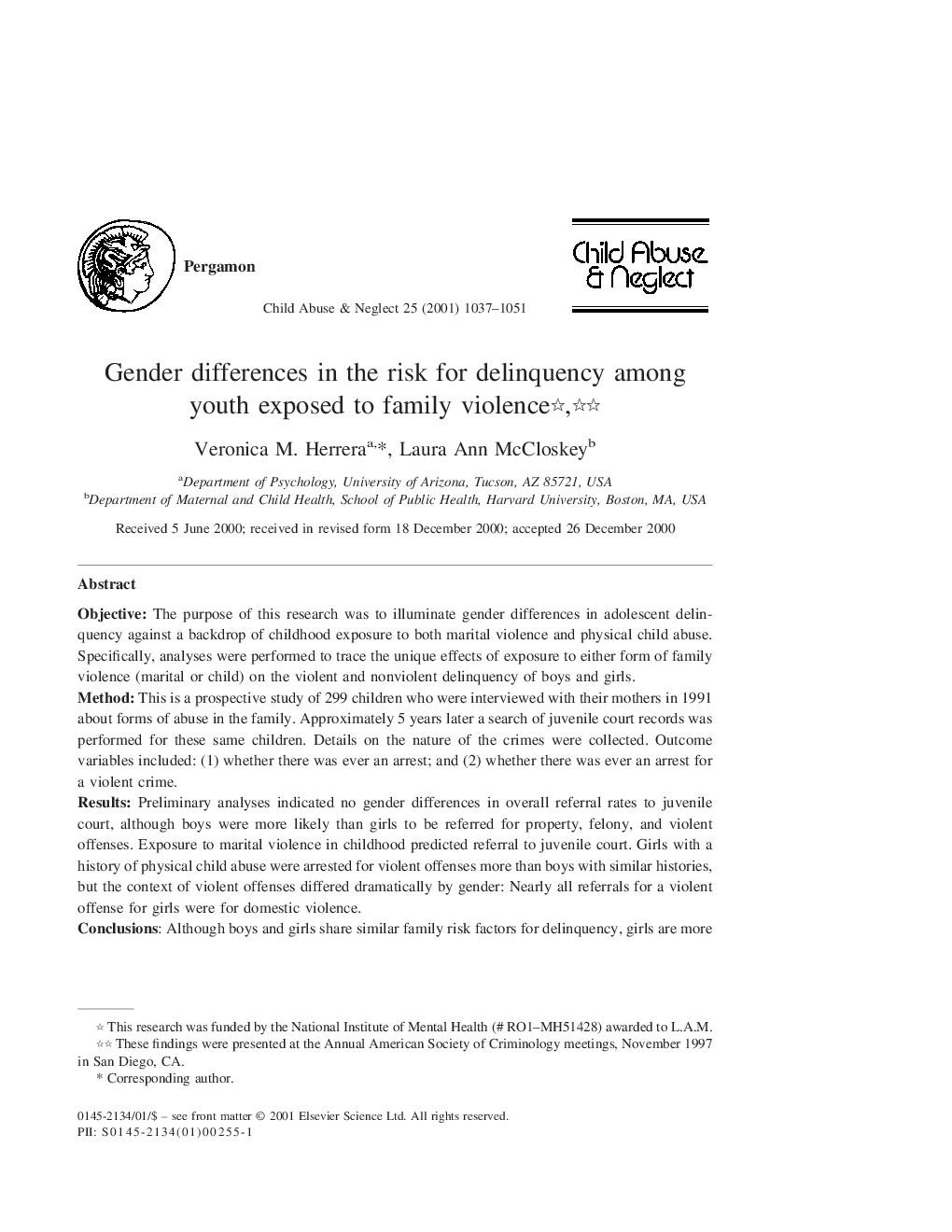 Abstract Objective: The purpose of this research was to illuminate gender differences in adolescent delinquency against a backdrop of childhood exposure to both marital violence and physical child abuse. Specifically, analyses were performed to trace the unique effects of exposure to either form of family violence (marital or child) on the violent and nonviolent delinquency of boys and girls. Method: This is a prospective study of 299 children who were interviewed with their mothers in 1991 about forms of abuse in the family. Approximately 5 years later a search of juvenile court records was performed for these same children. Details on the nature of the crimes were collected. Outcome variables included: (1) whether there was ever an arrest; and (2) whether there was ever an arrest for a violent crime. Results: Preliminary analyses indicated no gender differences in overall referral rates to juvenile court, although boys were more likely than girls to be referred for property, felony, and violent offenses. Exposure to marital violence in childhood predicted referral to juvenile court. Girls with a history of physical child abuse were arrested for violent offenses more than boys with similar histories, but the context of violent offenses differed dramatically by gender: Nearly all referrals for a violent offense for girls were for domestic violence. Conclusions: Although boys and girls share similar family risk factors for delinquency, girls are more likely than boys to be arrested for violent offenses in the aftermath of child physical abuse. These findings suggest that it takes more severe abuse to prompt violence in girls than is necessary to explain boys’ violent offending.

Results We describe below the degree of exposure to abuse derived from the interviews (the independent variable), and the rates of court referral and criminal offending of boys and girls (the dependent variables). We then performed logistic regressions to test whether exposure to different forms of abuse in the home predicted criminal profiles, and in particular, whether gender differences emerged. A logistic regression was used because our dependent variables were created as dichotomous variables. Descriptive statistics Exposure to violence Of the entire sample of children (n = 299), 43% witnessed marital violence and a total of 29% directly experienced escalated physical abuse. There was, however, substantial overlap in the forms of abuse to which children were exposed, with 17% exposed to both forms of violence (n = 50). A total of 132 children experienced either form of abuse (see Table 1). Table 1. Number of children having been exposed to spousal and/or child abuse Type of abuse Number of children Males Females Marital violence (total) 129 66 63 Marital violence only 79 40 39 Child Abuse (total) 88 49 39 Child abuse only 38 23 15 Both forms of abuse 50 26 24 Neither (no abuse) 132 63 69 Table options Analyses by form of abuse (child abuse, marital violence) indicated that 31% of the children receiving escalated forms of abuse and 33% who witnessed marital violence were referred to juvenile court at least once. Seventeen percent of abused children and 17% of children who witnessed abuse were referred for a violent offense. Of those children without abuse in their childhood, 18% (n = 25) were referred to juvenile court and 5% (n = 7) were referred for a violent offense. Gender differences in delinquency Seventy-five adolescents out of the entire sample were referred to juvenile court by the fall of 1995. Chi-square analyses revealed that there were no gender differences in ever being referred to juvenile court, with 44% (n = 33) of those referred being girls. In contrast, there were differences in the profile of offenses. Table 2depicts the results of χ2 analyses run on each offense category by sex. Boys committed more violent crimes [23 boys vs. 9 girls; χ2(1) = 5.71; p = .05], property offenses, [χ2(1) = 4.10; p < .05], and felonies [χ2(1) = 4.32; p < .05] than girls. Girls were as likely as boys to be referred for status offenses, running away, and petty theft. Table 2. Proportion of boys and girls who were referred for specific offense categories N Drug Felony Order Petty theft Property Run-away Status Violent Males 42 21% 41%∗ 36% 36% 71%∗ 36% 43% 55%∗ Females 33 6% 18% 24% 39% 49% 49% 55% 27% ∗ p < .05. Table options One type of violent offense, domestic violence, emerged as a distinct class of arrests. Among the youths ever referred to juvenile court, 23.8% of the boys and 24.2.% of the girls were arrested for a domestic violence charge. These charges were usually parent-child altercations, with youth charged with assault against a parent. On first glance it appears that boys and girls were equally likely to commit domestic violence offenses if they have an arrest record; but domestic violence weighed more heavily in girls’ violent offending than in boys. Among the girls ever arrested for a violent offense, 89% were arrested exclusively for domestic violence. Boys’ violent arrests were more heterogeneous, and their violent crimes were often perpetrated outside of the home. This finding indicates that the context for violence differs for boys and girls, with the domestic sphere an especially central venue for girls’ violence.