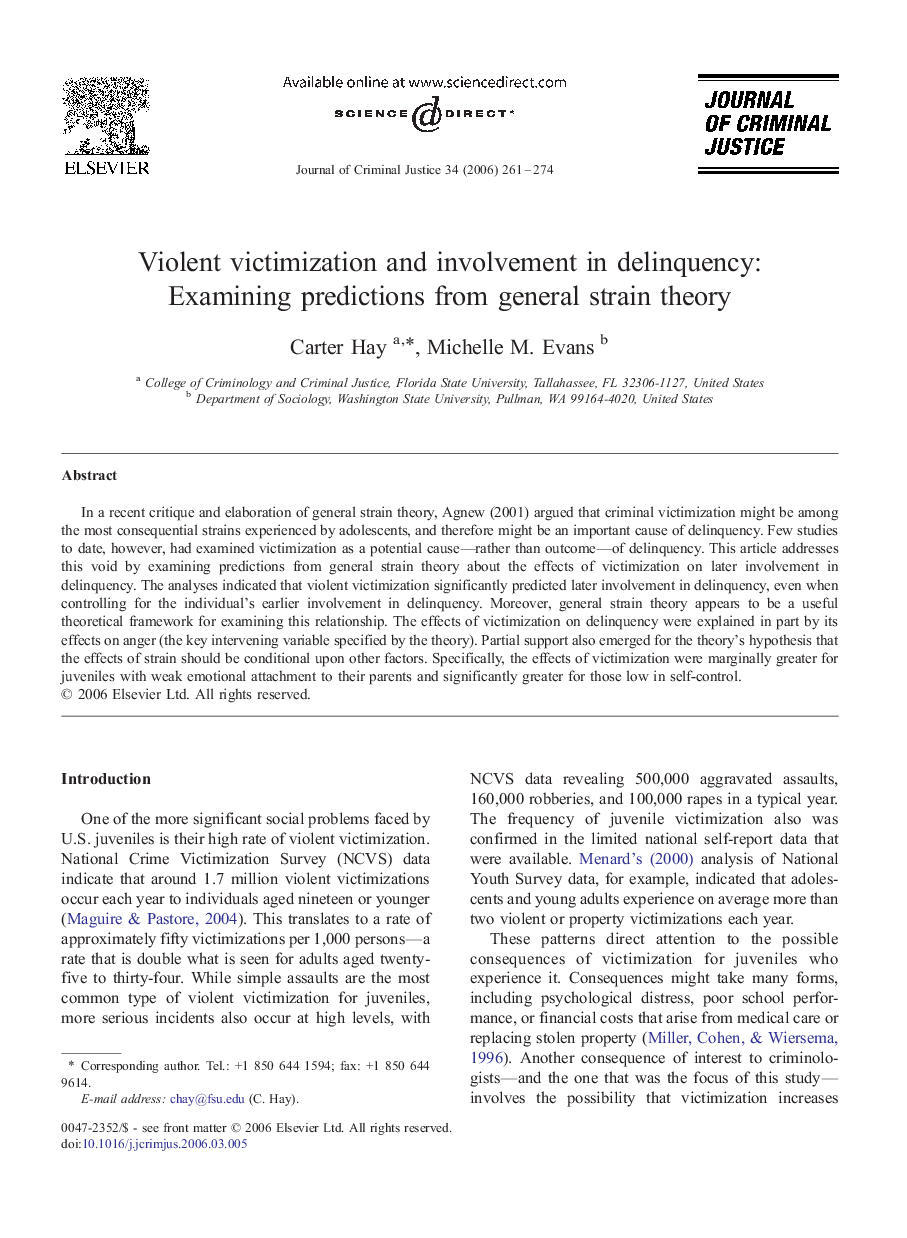 Introduction One of the more significant social problems faced by U.S. juveniles is their high rate of violent victimization. National Crime Victimization Survey (NCVS) data indicate that around 1.7 million violent victimizations occur each year to individuals aged nineteen or younger (Maguire & Pastore, 2004). This translates to a rate of approximately fifty victimizations per 1,000 persons—a rate that is double what is seen for adults aged twenty-five to thirty-four. While simple assaults are the most common type of violent victimization for juveniles, more serious incidents also occur at high levels, with NCVS data revealing 500,000 aggravated assaults, 160,000 robberies, and 100,000 rapes in a typical year. The frequency of juvenile victimization also was confirmed in the limited national self-report data that were available. Menard's (2000) analysis of National Youth Survey data, for example, indicated that adolescents and young adults experience on average more than two violent or property victimizations each year. These patterns direct attention to the possible consequences of victimization for juveniles who experience it. Consequences might take many forms, including psychological distress, poor school performance, or financial costs that arise from medical care or replacing stolen property (Miller, Cohen, & Wiersema, 1996). Another consequence of interest to criminologists—and the one that was the focus of this study—involves the possibility that victimization increases one's later involvement in delinquency. In short, might being a victim of a physical attack make someone more likely to commit his/her own later acts of crime and deviance? Research seeking to answer this question was notably lacking in the criminological literature. Aside from research focusing on child abuse in particular (Widom, 1989), the few criminological studies that considered the victimization-delinquency link had done so more with the opposite causal order in mind (Esbensen & Huizinga, 1991, Jensen & Brownfield, 1986 and Lauritsen et al., 1991). Working from an opportunity perspective, those studies considered that delinquency increases one's chances of victimization by increasing proximity to other delinquents. While such an argument is reasonable and may be partially true, it does not itself indicate that victimization has no implications for later delinquency. In short, victimization may increase later delinquency, even after controlling for earlier involvement in delinquency. In a significant elaboration of general strain theory (GST), Agnew, 2001 and Agnew, 2002 brought attention to this possibility. Like other strain theories, GST argues that strainful circumstances pressure individuals into committing delinquent acts. Agnew's (2001) recent elaboration was directed in large part to identifying which strains should be most consequential and why. As part of this discussion, Agnew (2002, p. 306) identified criminal victimization as “among the types of strain that are most likely to lead to delinquency,” pointing out, however, that victimization had been to date “largely neglected as a cause of delinquency.” Agnew, 2001 and Agnew, 2002 argued that victimization should be important because it often will be perceived as unjust and traumatic, and therefore will evoke negative emotions like anger or resentment. These emotions, in turn, increase the chances that a juvenile will resort to crime or deviance in an attempt to cope with their strain. This might involve substance use meant to soothe psychological distress, but also could involve predatory acts directed at the perceived offender or displaced upon others. These arguments call for research that examines this potentially important cause of delinquency and does so in a way that provides insight into the accuracy of GST. The purpose of this article is to provide such research. Specifically, this article examines three hypotheses that are central to the victimization-delinquency relationship and that shed light on GST's ability to explain it. The first hypothesis is that violent victimization should be positively related with later involvement in delinquency, even after including the necessary statistical controls (including a control for involvement in prior delinquency). Second, if GST's view of this relationship is correct, the effects of victimization on delinquency should be at least partly explained by the juvenile's level of anger, the key intervening variable specified by GST. Third, if GST is to be further supported, the effects of victimization should depend in part on variables it identifies as factors that condition the effects of strain. The original statement of GST (Agnew, 1992, pp. 70–74) cited a number of such variables. This article examines this hypothesis by considering two in particular: juveniles' emotional attachment to parents (an indicator of access to conventional social support) and their level of self-control (an indicator of individual coping resources). These hypotheses are examined with data from the National Survey of Children, a panel study of U.S. adolescents and their families (Zill, Furstenburg, Peterson, & Moore, 1990). These data have been used in other investigations of adolescent outcomes (Agnew et al., 2002 and Baumer & South, 2001) and are well-suited to testing these hypotheses in particular. Most importantly, they contain not only strong measures of victimization and delinquency, but also valid and reliable measures of anger and two key conditioning factors specified by GST (parent–child attachment and self-control). Also, the project's panel design enables a longitudinal test that matches the causal order specified by GST. Before further discussing the data, GST is first described in greater detail by summarizing its key arguments and the results from empirical tests. This is followed by a discussion of Agnew's (2001) recent elaboration of the theory that guides new research and that calls attention to victimization as a potentially consequential form of strain.