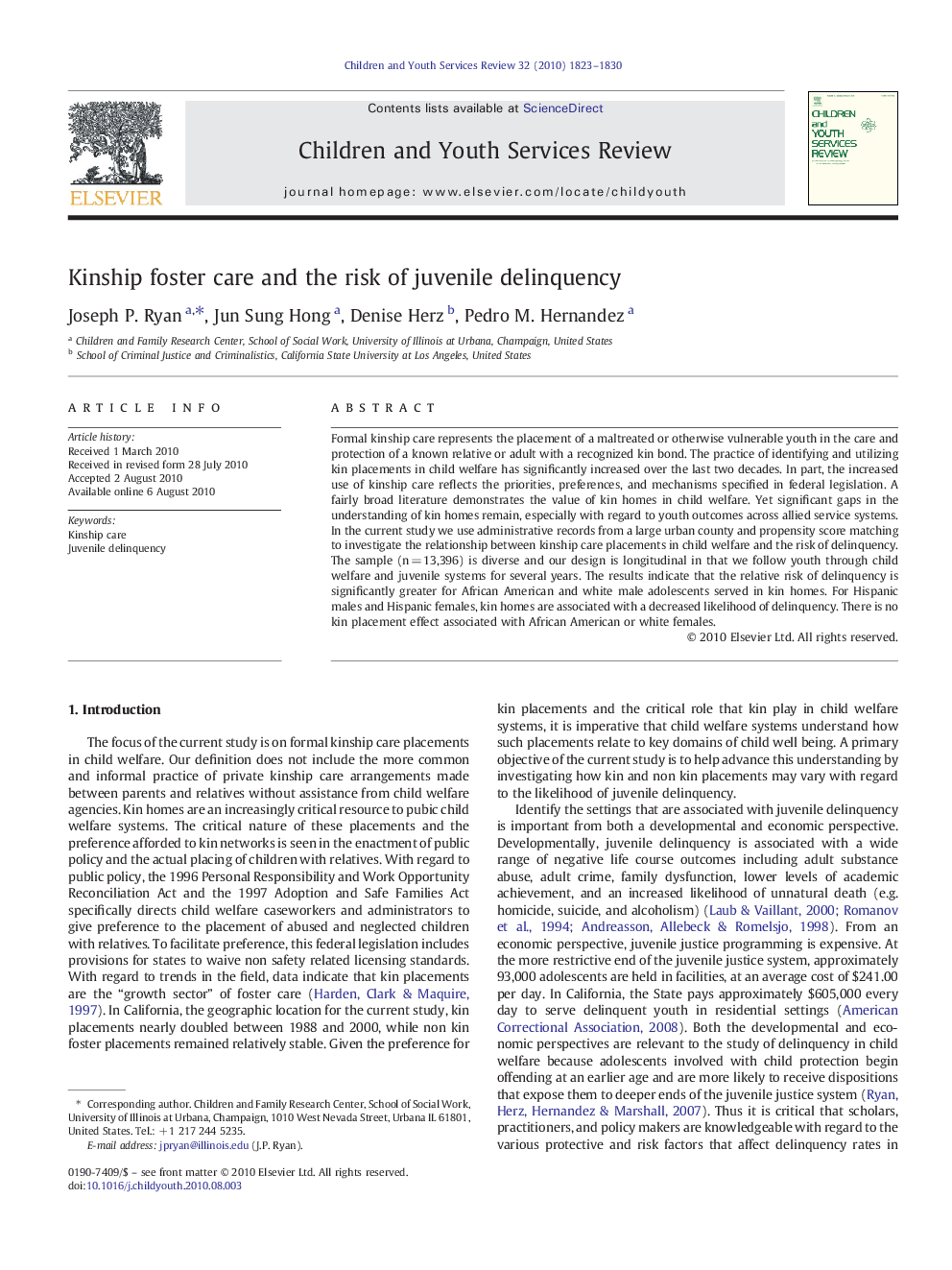 Abstract Formal kinship care represents the placement of a maltreated or otherwise vulnerable youth in the care and protection of a known relative or adult with a recognized kin bond. The practice of identifying and utilizing kin placements in child welfare has significantly increased over the last two decades. In part, the increased use of kinship care reflects the priorities, preferences, and mechanisms specified in federal legislation. A fairly broad literature demonstrates the value of kin homes in child welfare. Yet significant gaps in the understanding of kin homes remain, especially with regard to youth outcomes across allied service systems. In the current study we use administrative records from a large urban county and propensity score matching to investigate the relationship between kinship care placements in child welfare and the risk of delinquency. The sample (n = 13,396) is diverse and our design is longitudinal in that we follow youth through child welfare and juvenile systems for several years. The results indicate that the relative risk of delinquency is significantly greater for African American and white male adolescents served in kin homes. For Hispanic males and Hispanic females, kin homes are associated with a decreased likelihood of delinquency. There is no kin placement effect associated with African American or white females.

. Conclusion Kin placements will remain a preferred placement setting. In part, this preference is justified by the evidence indicating that kin homes are capable of achieving the primary goals of child welfare; protecting children, supporting families, and providing a sense of permanence (Berrick, 1998). The preference for kin also reflects broader changes in societal and professional values; specifically that families are a source of strength and should be engaged in matters of child welfare (Berrick, 1998; Child Welfare League of American, 1994). Yet, preferences alone will not produce effective programming for vulnerable children and youth. Kinship care providers require the same level of financial and service support afforded to non kinship homes. Although decreasing in recent years, disparities in such support are well noted throughout the literature (Schwartz, 2002). It is also important for the field to continue investigating a broad array of developmental outcomes associated with kin and non kin placements. Placement stability and the comfort of knowing the kin providers are extremely important intermediate outcomes, but such outcomes should not dominate discussions and distract attention from additional and equally valuable measures of child well being. Hopefully the current study will contribute to the thoughtful and constructive critique of substitute care settings in child welfare and help inform a dialogue focused on improving the lives and developmental trajectories of vulnerable adolescents.