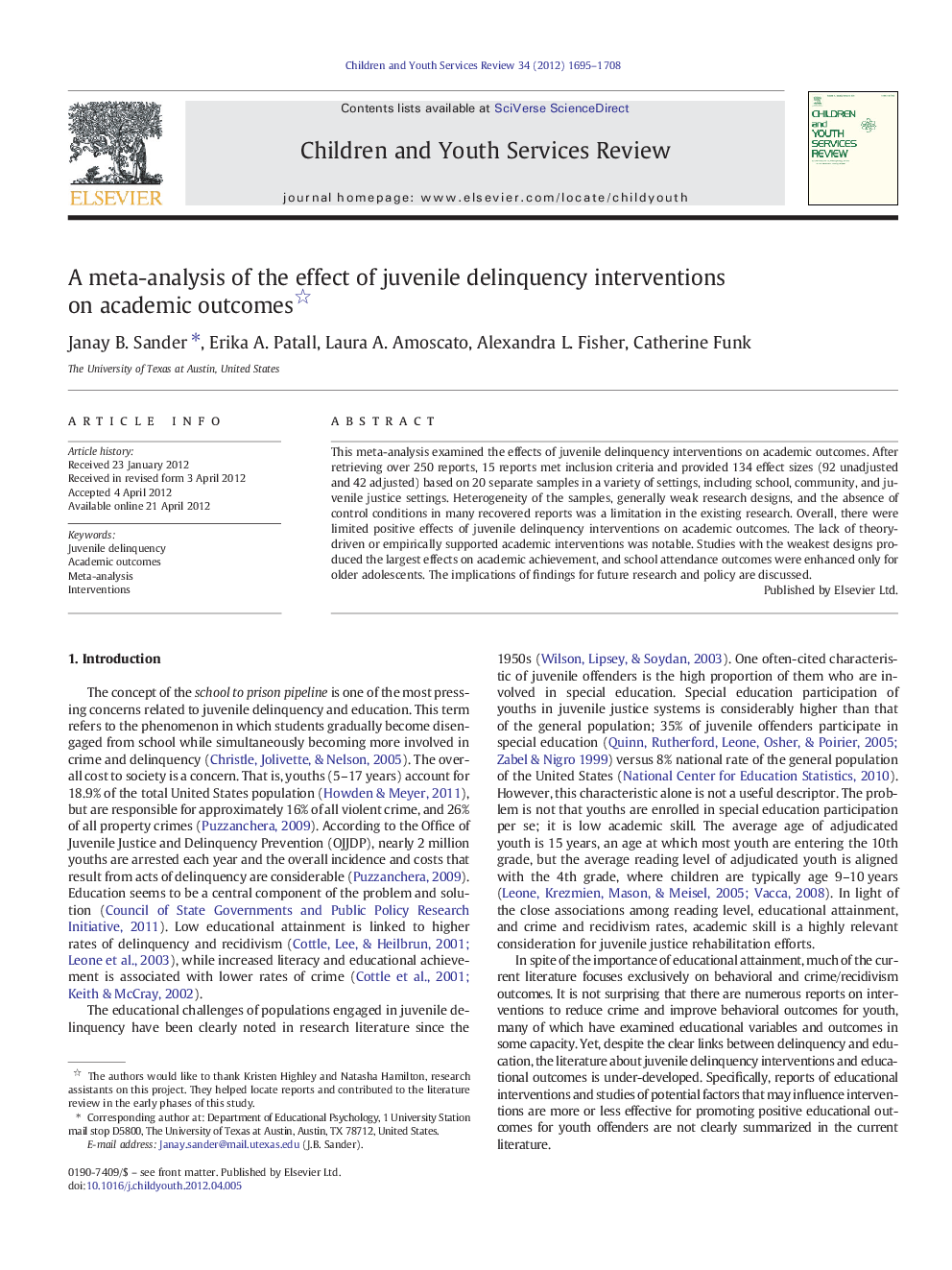 Abstract This meta-analysis examined the effects of juvenile delinquency interventions on academic outcomes. After retrieving over 250 reports, 15 reports met inclusion criteria and provided 134 effect sizes (92 unadjusted and 42 adjusted) based on 20 separate samples in a variety of settings, including school, community, and juvenile justice settings. Heterogeneity of the samples, generally weak research designs, and the absence of control conditions in many recovered reports was a limitation in the existing research. Overall, there were limited positive effects of juvenile delinquency interventions on academic outcomes. The lack of theory-driven or empirically supported academic interventions was notable. Studies with the weakest designs produced the largest effects on academic achievement, and school attendance outcomes were enhanced only for older adolescents. The implications of findings for future research and policy are discussed.

. Conclusions This synthesis provides a marker of the state of the literature, and there is considerable room for increased knowledge to inform juvenile delinquency research in some meaningful ways. Given that educational variables are malleable and dynamic (Edmonds et al., 2009), and are closely associated with criminal behavior (Cottle et al., 2001 and Zabel and Nigro, 2007), incorporating educational aspects into rehabilitation programs seems intuitive in terms of a needs-response or responsivity principle (Andrews, 1995). It is clear that rehabilitation programs, particularly those based on specific needs of the offender, are helpful in reducing criminal activity (Lipsey & Cullen, 2007) Moreover, it seems likely that rehabilitation programs might be most advantageous when educational outcomes are also improved. Unfortunately, the effectiveness of those programs that have been tested for improving academic outcomes seems to be lackluster, or at least the evidence is lacking. A possible avenue for future research is to examine the effects of juvenile delinquency programs that make use of the recently expanded variety of programs and resources from the educational intervention literature that have been found to be most effective. The relationship between low academic achievement and delinquency is well established (Cottle et al., 2001), but the field needs to move on to exploring ‘how’ and ‘why’ this link is present in order to improve and inform future delinquency interventions and interrupt the school to prison pipeline. It would be helpful for juvenile justice and educational researchers to draw on interdisciplinary approaches and collaborate in order to address the ongoing and related problems of juvenile delinquency and school failure.