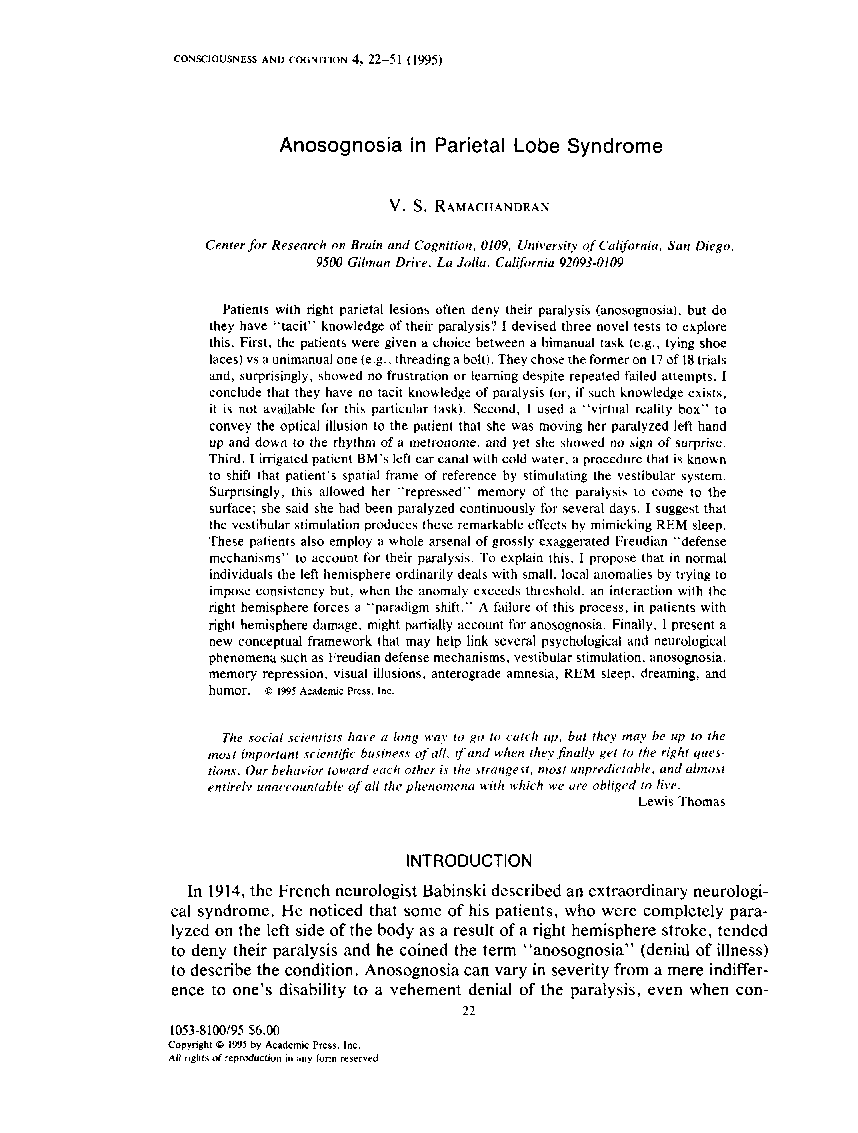 Abstract Patients with right parietal lesions often deny their paralysis (anosognosia), but do they have "tacit" knowledge of their paralysis? I devised three novel tests to explore this. First, the patients were given a choice between a bimanual task (e.g., tying shoe laces) vs a unimanual one (e.g., threading a bolt). They chose the former on 17 of 18 trials and, surprisingly, showed no frustration or learning despite repeated failed attempts. I conclude that they have no tacit knowledge of paralysis (or, if such knowledge exists, it is not available for this particular task). Second, I used a "virtual reality box" to convey the optical illusion to the patient that she was moving her paralyzed left hand up and down to the rhythm of a metronome, and yet she showed no sign of surprise. Third, I irrigated patient BM′s left ear canal with cold water, a procedure that is known to shift that patient′s spatial frame of reference by stimulating the vestibular system. Surprisingly, this allowed her "repressed" memory of paralysis to come to the surface; she said she had been paralyzed continuously for several days. I suggest that the vestibular stimulation produces these remarkable effects by mimicking REM sleep. These patients also emply a whole arsenal of grossly exaggerated Freudian "defense mechanisms" to account for their paralysis. To explain this, I propose that in normal individuals the left hemisphere ordinarily deals with small, local anomalies by trying to impose consistency but, when the anomaly exceeds threshold, an interaction with the right hemisphere forces a "paradigm shift". A failure of this process, in patients with right hemisphere damage, might partially account for anosognosia. Finally, I present a new conceptual framework that may help link several psychological and neurological phenomena such as Freudian defense mechanisms, vestibular stimulation, anosognosia, memory repression, visual illusions, anterograde amnesia, REM sleep, dreaming, and humor.