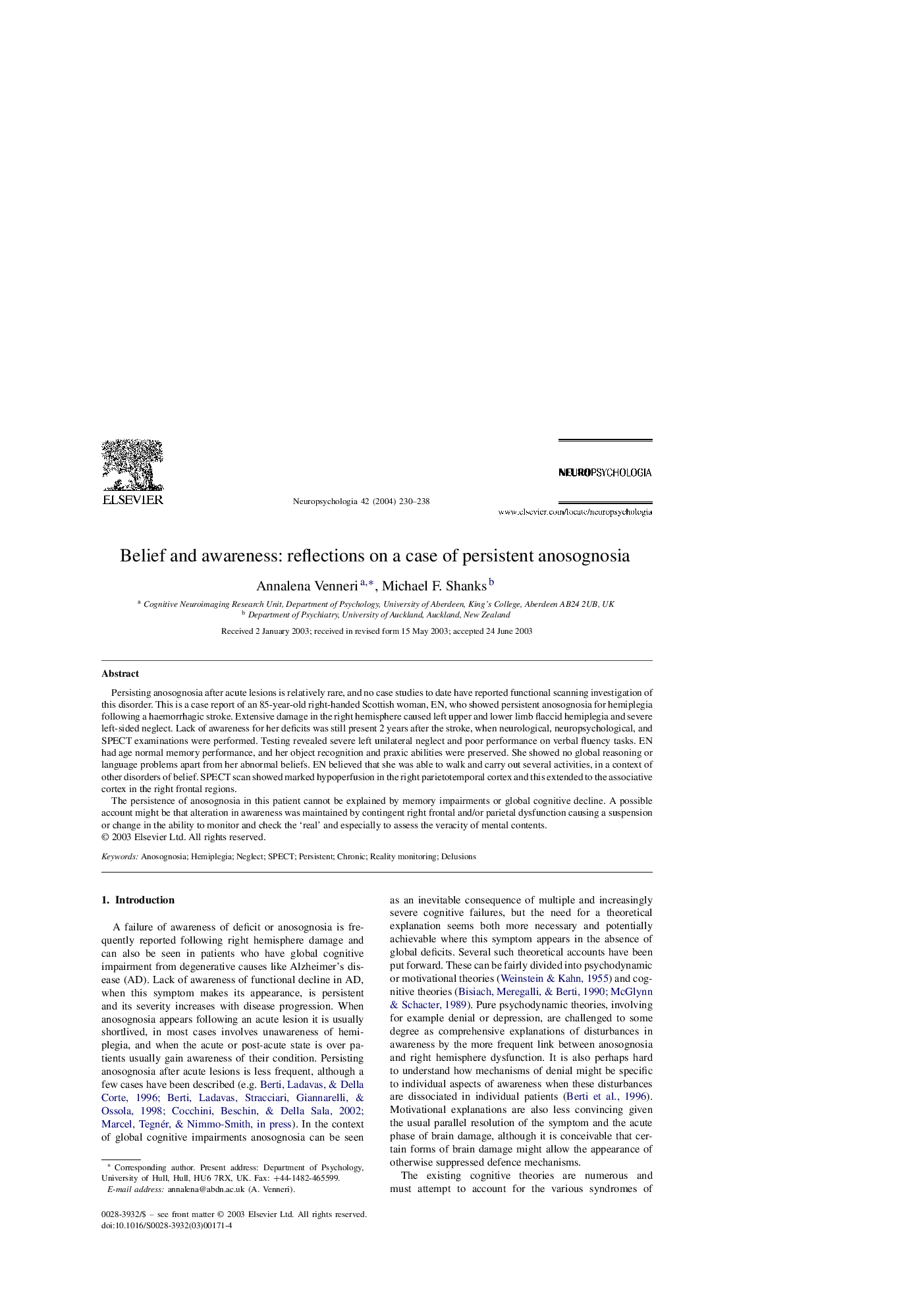 Abstract Persisting anosognosia after acute lesions is relatively rare, and no case studies to date have reported functional scanning investigation of this disorder. This is a case report of an 85-year-old right-handed Scottish woman, EN, who showed persistent anosognosia for hemiplegia following a haemorrhagic stroke. Extensive damage in the right hemisphere caused left upper and lower limb flaccid hemiplegia and severe left-sided neglect. Lack of awareness for her deficits was still present 2 years after the stroke, when neurological, neuropsychological, and SPECT examinations were performed. Testing revealed severe left unilateral neglect and poor performance on verbal fluency tasks. EN had age normal memory performance, and her object recognition and praxic abilities were preserved. She showed no global reasoning or language problems apart from her abnormal beliefs. EN believed that she was able to walk and carry out several activities, in a context of other disorders of belief. SPECT scan showed marked hypoperfusion in the right parietotemporal cortex and this extended to the associative cortex in the right frontal regions. The persistence of anosognosia in this patient cannot be explained by memory impairments or global cognitive decline. A possible account might be that alteration in awareness was maintained by contingent right frontal and/or parietal dysfunction causing a suspension or change in the ability to monitor and check the ‘real’ and especially to assess the veracity of mental contents.

. Introduction A failure of awareness of deficit or anosognosia is frequently reported following right hemisphere damage and can also be seen in patients who have global cognitive impairment from degenerative causes like Alzheimer’s disease (AD). Lack of awareness of functional decline in AD, when this symptom makes its appearance, is persistent and its severity increases with disease progression. When anosognosia appears following an acute lesion it is usually shortlived, in most cases involves unawareness of hemiplegia, and when the acute or post-acute state is over patients usually gain awareness of their condition. Persisting anosognosia after acute lesions is less frequent, although a few cases have been described (e.g. Berti et al., 1996, Berti et al., 1998, Cocchini et al., 2002 and Marcel et al., in press). In the context of global cognitive impairments anosognosia can be seen as an inevitable consequence of multiple and increasingly severe cognitive failures, but the need for a theoretical explanation seems both more necessary and potentially achievable where this symptom appears in the absence of global deficits. Several such theoretical accounts have been put forward. These can be fairly divided into psychodynamic or motivational theories (Weinstein & Kahn, 1955) and cognitive theories (Bisiach et al., 1990 and McGlynn and Schacter, 1989). Pure psychodynamic theories, involving for example denial or depression, are challenged to some degree as comprehensive explanations of disturbances in awareness by the more frequent link between anosognosia and right hemisphere dysfunction. It is also perhaps hard to understand how mechanisms of denial might be specific to individual aspects of awareness when these disturbances are dissociated in individual patients (Berti et al., 1996). Motivational explanations are also less convincing given the usual parallel resolution of the symptom and the acute phase of brain damage, although it is conceivable that certain forms of brain damage might allow the appearance of otherwise suppressed defence mechanisms. The existing cognitive theories are numerous and must attempt to account for the various syndromes of anosognosia, and the different observed patterns of neurological and cognitive disturbance. No theory appears to account for the phenomenon in all its forms, its association with the right hemisphere, and the appearance of anosognosia as both a transient and occasionally as a persistent symptom. This paper reports a case of persisting anosognosia for hemiplegia and left-sided neglect in the absence of global mental deterioration. It is suggested that the associated phenomena of false beliefs and misidentifications may be integral components of persistent anosognosia in this case. Similar mechanisms may be of importance, albeit transiently, in association with more acute disturbances of awareness. It is important for our argument, and not available in other published material, that functional as well as structural imaging is available for analysis in this case.