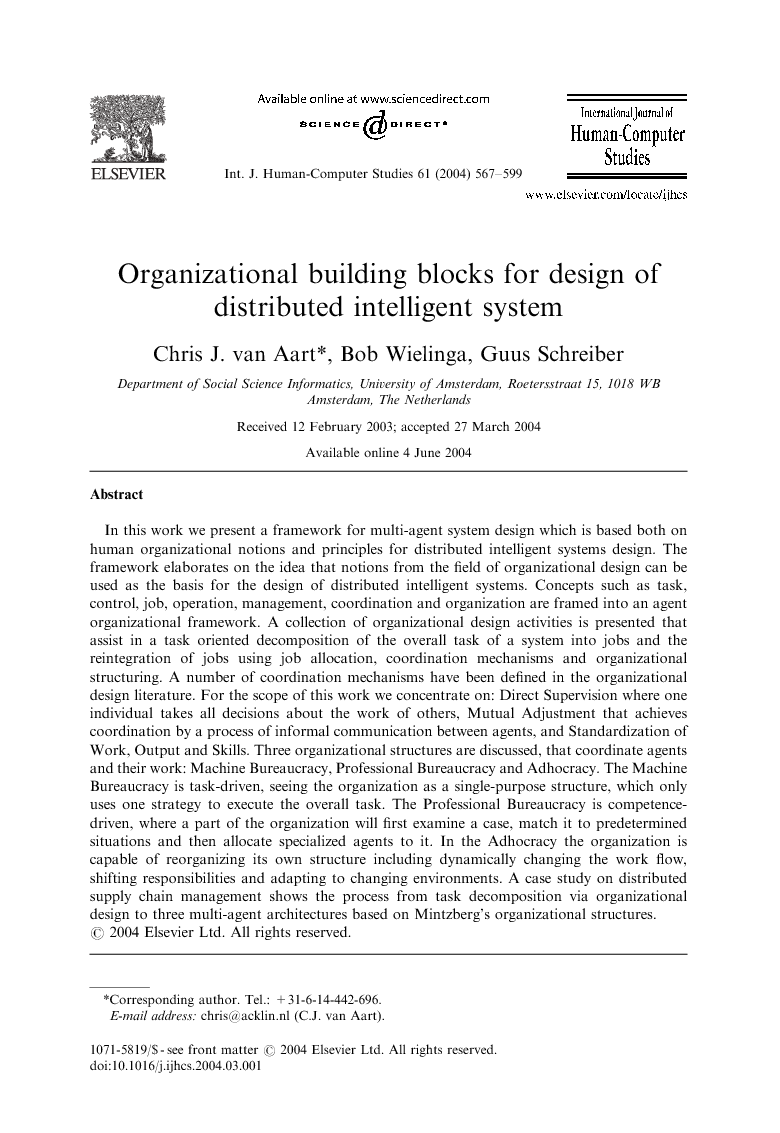 In this paper, we discuss a framework for the design of distributed intelligent systems. The framework is based on human organizational notions and principles, aimed at managing relations between organizational agents1 and the activities they perform, rather than at the design of individual agents. The framework elaborates on the idea that notions from the field of organizational design can be used as the basis for the design of distributed intelligent systems. Already in the eighties, links between human organizations and computational systems were suggested (Fox, 1981; Malone, 1987). Since then, organizational approaches have become themes in research areas for supporting coordination and framing control relations. Hewitt has pointed out that in organization lies power (Hewitt, 1991). Indeed, despite the differences between software agents and humans a number of concepts, mechanisms and patterns can be used as principles for distributed intelligent systems design (Fox, 1981). Different agent-oriented modeling techniques and methods have been presented, see for an overview (Wooldridge et al., 2000). For example, GAIA specifies agent systems in terms of interaction roles. Roles are defined with responsibilities, permissions and protocols into a role model. An interaction model defines a protocol for each type of inter-role interaction (Wooldridge et al., 2000). However, GAIA only implicitly uses the notion of organizations and should be enhanced with organizational structures (Zambonelli et al., 2000). Research efforts on agents and organizations have been reported in the organizational design literature, including research on electronic institutions (Esteva et al., 2001), computational and mathematical models of organizations (Carley and Gasser, 1999) and organizational views on multi-agent systems (Ferber, 1999). State of the art in multi-agent research can be found in (Luck et al., 2003). Fox sees an organizational structure for a distributed system as the collection of processes (i.e. agents), communication paths and a control regime that coordinates the whole (Fox, 1981). Therefore, research efforts in the agent field have dealt with the problem of enabling interactions among agents, middleware components (mediator, information brokers) and infrastructures. For example, agent interaction allows agents to transfer information and knowledge. However, the approach of the research efforts reported in the agent literature is on the system (implementation) perspective. Distributed artificial intelligence (DAI) has looked at overcoming limitations of individual agents by tackling problems through running distributed computational processes. For this reason, research in (distributed) knowledge models, communication and reasoning techniques have led to ways in which agents can participate in societies of agents, i.e. agencies. We see an agency as a society of agents, in which each of them can be specialized with knowledge, one or more skills and has a sort of mechanism that permits interaction with others. Examples of agencies are collections of individuals, including humans, machines and computational processes such as web services and agents. A specific type of agency is a multi-agent system, which is defined by O’Hare and Jennings as a loosely coupled network of problems solvers (i.e. agents) that work together to solve problems that are beyond their individual capabilities (O’Hare and Jennings, 1996). Every agent has one or more limitations, which can be categorized into cognitive, physical, temporal and institutional limitations. Cognitive limitations model the fact that individuals are rationally bounded. It means that the data, information, and knowledge an individual can process and the detail of control an individual can handle is limited. As tasks grow larger and more complex, techniques must be applied to limit the growth of information and the complexity of control. Individuals can be limited physically, because of their physiology or because of the resources available to them. Temporal limitations exist where the achievement of individual goals exceeds the lifetime of an individual, or the time during which resources are available for this goal. Finally, institutional limitations mean that individuals are legally or politically constrained. Social systems, i.e. groups of humans and social connections, can be viewed as computational systems. Many human activities are concerned with transforming information and knowledge from one form to another. In addition, human activities (such as receiving orders, reporting and processing) are frequently information-driven (Galbraith, 1973). An example is an agent-based system for digital cross-border information flow within a European network of insurance companies. In this case, agents that exchange the same information via the Internet replaced people who exchanged information by telephone (van Aart et al., 2002). However, when designing complex systems with multiple agents and multiple tasks, it is likely that social rules will lead to systems that are hard to design and maintain. If every agent is equipped with social rules prescribing the way it should behave in the system, these rules will have to be valid in every situation. The result can be a set of agents where the rule base for social rules is more complex than their competences. At the moment, if a task, domain or group of agent changes, every agent (and its social rule base) has to be adjusted. Concepts, mechanisms and patterns from the field of organizational design have already been used as the basis for distributed intelligent system design (Fox, 1981; Corkill and Lander, 1998; Carley and Gasser, 1999). However, little work has been reported on the explicit use of the notion of organizations in distributed intelligent system design. Moreover, Jennings argues that there are (still) insufficient mechanisms available for representing an agent-based system's organizational structure (Jennings, 2000). However, several organizational structures and mechanisms are described within the organizational design literature. Therefore, we are interested in the use of this organizational knowledge in multi-agent architecture design. The remainder of this paper is organized as follows. In Section 2, we investigate the building blocks from organizational design that form the basis of our framework. Organizational structures are described in Section 3. Section 4 describes a collection of organizational design activities that operate within the framework. In Section 5, a case study on supply chain management is analyzed with the framework, which resulted in three organizational structure designs and a small prototype application. Finally, we discuss issues arising from this study and suggest future work.

The goal of this paper is to get insights in the application of human organizational principles in distributed intelligent system design. We discussed a collection of organizational concepts, organizational models and coordination mechanisms. As argued by Jennings, organizational relationships need to be explicitly represented (Jennings, 2000). Therefore, “Organigrams” have been used as a mechanism for representing a system's organizational structure. This resulted in an agent organization framework with four perspectives: task, operation, coordination and organization. Furthermore, an organizational design method was presented containing three steps: process analysis, operation design and organizational design. The steps assist in the decomposition of the overall task of a system into jobs and the reintegration of the jobs into the overall task using job allocation, organizational structuring and coordination mechanisms. The case study presented in this paper, showed that the repetitive nature of the tasks allowed the relations between agents to be identified only once. A reason for this is that supply chain management can be seen as information-driven, due to its repetitive nature. In the prototypes, we implemented Direct Supervision, Standardization of Output and Mutual Adjustment. Furthermore, the Agent Organization Console showed that the progress of the organization can be monitored by tracing the flow of objects within messages. If we see supply chain management as competence-driven, i.e. the process relies on the problem-solving skills that agents have, other organizational structures and coordination mechanisms can be applied. With the pigeonholing process, the competences of the agents can be categorized and mapped on a categorization of predetermined situations. The pigeonholing process is the main difference between Professional Bureaucracy and Machine Bureaucracy. A Machine Bureaucracy is task-driven, i.e. the organization is a single-purpose structure, which executes only one standard sequence of jobs. Whereas the Professional Bureaucracy is competence-driven, i.e. a part of the organization will first examine a case, match it to predetermined situations and then allocate an Operator with a standard set of jobs to it. Using one or more of the coordination mechanisms presented in Section 2.3 the agents can choose a strategy, which can lead to more interesting solutions to complex problems. For example, if standardization of output, in terms of standardized ontologies and languages, fails for some reason, it could be resolved by giving one or more agents the ability of failure detection and failure resolution. The difference between an Adhocracy and the two Bureaucracies is that within an Adhocracy, agents have to find creative solutions to unique problems using forms of negotiation such as argumentation. In an Adhocracy, the agents should be capable of reorganizing their own organization including dynamically changing the flow of objects, shifting responsibilities and adapting to changing environments. For this reason, the agents should have a notion of the environment, abilities to determine the overall tasks, and have knowledge to reason about the actions they can perform. The work presented in this paper showed that notions from organizational design such as task, job, position, direct supervision and standardization can be used in the design of distributed intelligent systems. A more formal approach is subject for future research. Furthermore, coordination can be handled by various methods, leading to different organizational structures. Finally, organigrams can support the visualization of organizational structures, by showing the agent staff, the grouping of the agents and the authority structure that connects the units and individual agents. However, organigrams only represent a static perspective on an organization and only suggest a coordination strategy. Together with diagrams in UML and AUML, it could form the basis of a graphical distributed intelligent systems modeling language. Future research includes extensions to the existing framework, which should be of assistance in the organizational design decision process to bring coherence between the goals or purposes for which the organization exists, the patterns of division of labor, patterns of coordination, and the agents that perform the jobs. The extensions should help designers to address more precisely an organization's overall task and environment. One of the extensions will address technology to be utilized, for example, technology as described by FIPA (agent standardization), the grid (peer-to-peer computing) and the semantic web (service discovery and composition). When using FIPA standards, our method should be compliant with models and technology that draw on interaction protocols and agent services, such as white, yellow and blue pages. Many web services (which can be seen agent-based services) are available. However, the notion of negotiation has only recently begun to be an issue of research in the semantic web community. Moreover, web services tend to follow the classic client/server model, where web services behave as servers and will only answer to a client directly. In an agent setting, an agent service can be configured to give its answer to another agent service, which leads to a chain of services. In the end, the framework should assist in the formalization of the overall behavior of a distributed intelligent system in terms of organizational structure and organization behavior. Predictable and controllable behavior of agents will lead to reduction in the variability of systems. Furthermore, agents in an organizational setting should have means (e.g. methods, procedures and knowledge) to handle uncertainty and unpredictable events.