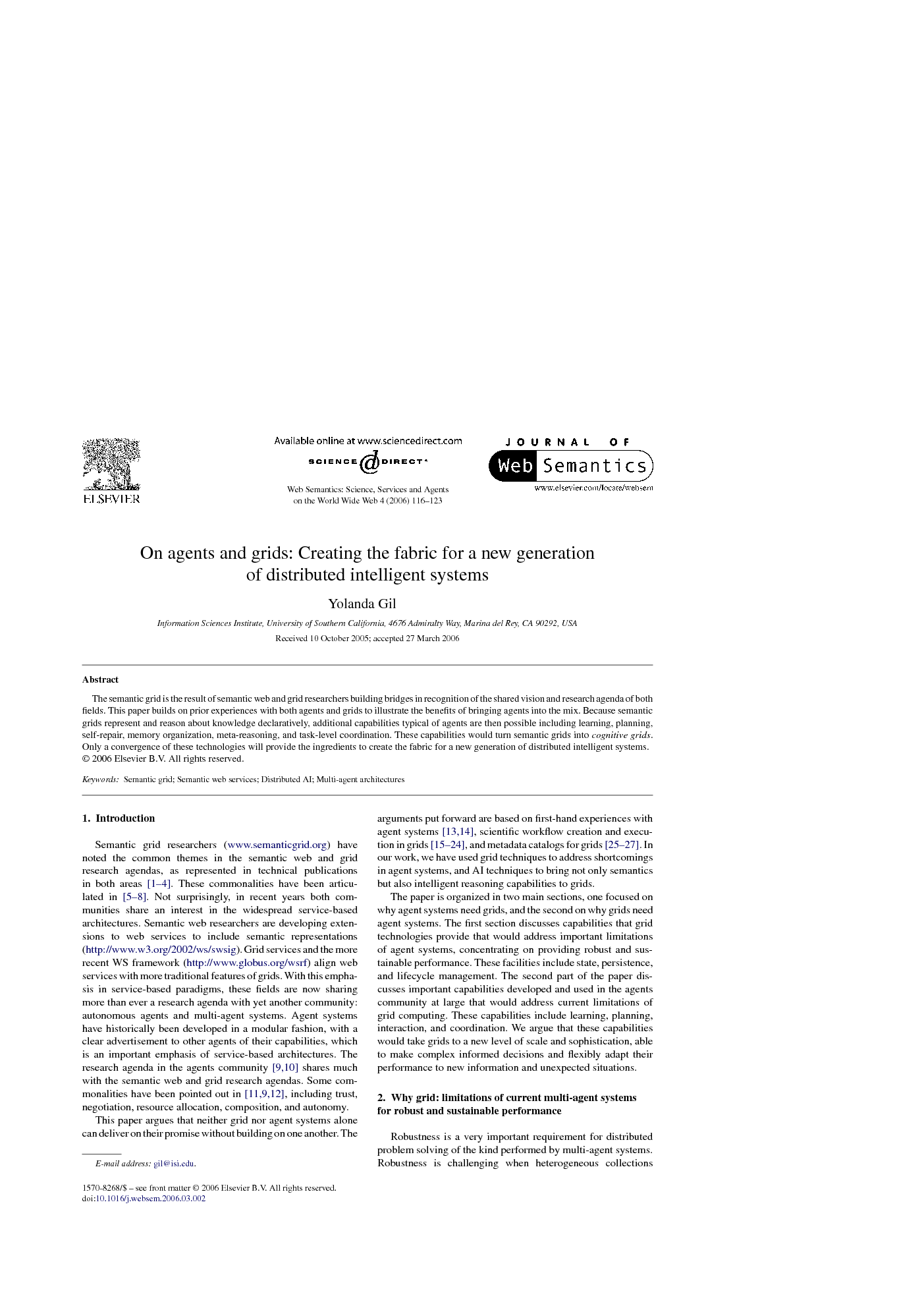 The semantic grid is the result of semantic web and grid researchers building bridges in recognition of the shared vision and research agenda of both fields. This paper builds on prior experiences with both agents and grids to illustrate the benefits of bringing agents into the mix. Because semantic grids represent and reason about knowledge declaratively, additional capabilities typical of agents are then possible including learning, planning, self-repair, memory organization, meta-reasoning, and task-level coordination. These capabilities would turn semantic grids into cognitive grids. Only a convergence of these technologies will provide the ingredients to create the fabric for a new generation of distributed intelligent systems.

Semantic grid researchers (www.semanticgrid.org) have noted the common themes in the semantic web and grid research agendas, as represented in technical publications in both areas [1], [2], [3] and [4]. These commonalities have been articulated in [5], [6], [7] and [8]. Not surprisingly, in recent years both communities share an interest in the widespread service-based architectures. Semantic web researchers are developing extensions to web services to include semantic representations (http://www.w3.org/2002/ws/swsig). Grid services and the more recent WS framework (http://www.globus.org/wsrf) align web services with more traditional features of grids. With this emphasis in service-based paradigms, these fields are now sharing more than ever a research agenda with yet another community: autonomous agents and multi-agent systems. Agent systems have historically been developed in a modular fashion, with a clear advertisement to other agents of their capabilities, which is an important emphasis of service-based architectures. The research agenda in the agents community [9] and [10] shares much with the semantic web and grid research agendas. Some commonalities have been pointed out in [11], [9] and [12], including trust, negotiation, resource allocation, composition, and autonomy. This paper argues that neither grid nor agent systems alone can deliver on their promise without building on one another. The arguments put forward are based on first-hand experiences with agent systems [13] and [14], scientific workflow creation and execution in grids [15], [16], [17], [18], [19], [20], [21], [22], [23] and [24], and metadata catalogs for grids [25], [26] and [27]. In our work, we have used grid techniques to address shortcomings in agent systems, and AI techniques to bring not only semantics but also intelligent reasoning capabilities to grids. The paper is organized in two main sections, one focused on why agent systems need grids, and the second on why grids need agent systems. The first section discusses capabilities that grid technologies provide that would address important limitations of agent systems, concentrating on providing robust and sustainable performance. These facilities include state, persistence, and lifecycle management. The second part of the paper discusses important capabilities developed and used in the agents community at large that would address current limitations of grid computing. These capabilities include learning, planning, interaction, and coordination. We argue that these capabilities would take grids to a new level of scale and sophistication, able to make complex informed decisions and flexibly adapt their performance to new information and unexpected situations.

Agent systems embody current AI research on distributed intelligent systems. Yet, agent systems have drawn in very limited ways from distributed computing, which hinders their scalability and long-lived operations. Grids, in turn, aim to develop similarly intelligent capabilities but from the bottom up, and have concentrated more on managing low-level resources than higher-level tasks. Cross-cutting research across both areas would enable significant progress in grids as well as agents research. Semantic grids bring declarative representations of knowledge to grids, and once that knowledge is available there are various cognitive capabilities typical of agent systems that become possible including learning, self-repair, planning, meta-reasoning, coordination, and communication abilities. The result will be cognitive grids, a new generation of distributed intelligent systems that will be significantly more capable, autonomous, and adaptive.