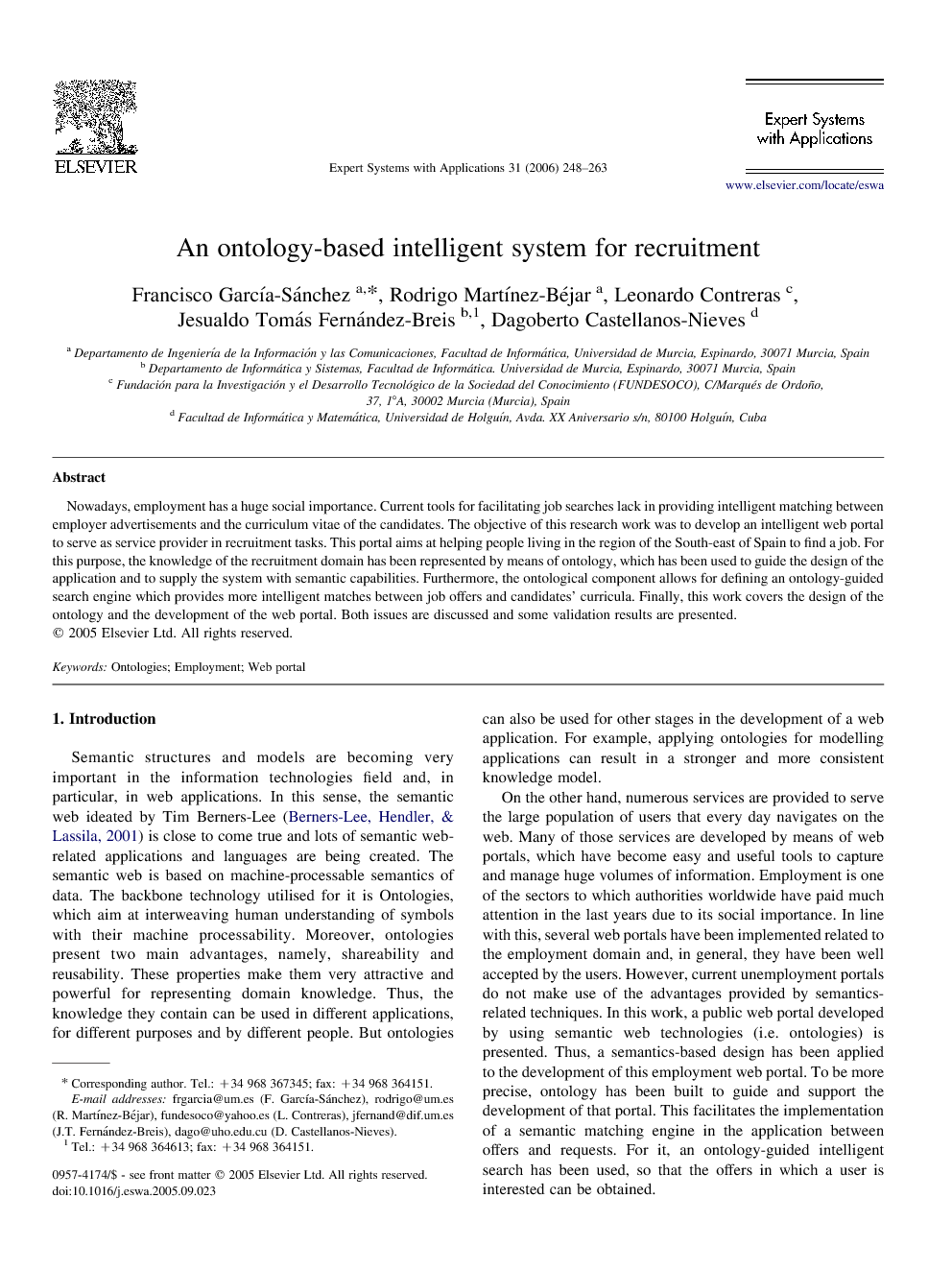 Nowadays, employment has a huge social importance. Current tools for facilitating job searches lack in providing intelligent matching between employer advertisements and the curriculum vitae of the candidates. The objective of this research work was to develop an intelligent web portal to serve as service provider in recruitment tasks. This portal aims at helping people living in the region of the South-east of Spain to find a job. For this purpose, the knowledge of the recruitment domain has been represented by means of ontology, which has been used to guide the design of the application and to supply the system with semantic capabilities. Furthermore, the ontological component allows for defining an ontology-guided search engine which provides more intelligent matches between job offers and candidates' curricula. Finally, this work covers the design of the ontology and the development of the web portal. Both issues are discussed and some validation results are presented.

Semantic structures and models are becoming very important in the information technologies field and, in particular, in web applications. In this sense, the semantic web ideated by Tim Berners-Lee (Berners-Lee, Hendler, & Lassila, 2001) is close to come true and lots of semantic web-related applications and languages are being created. The semantic web is based on machine-processable semantics of data. The backbone technology utilised for it is Ontologies, which aim at interweaving human understanding of symbols with their machine processability. Moreover, ontologies present two main advantages, namely, shareability and reusability. These properties make them very attractive and powerful for representing domain knowledge. Thus, the knowledge they contain can be used in different applications, for different purposes and by different people. But ontologies can also be used for other stages in the development of a web application. For example, applying ontologies for modelling applications can result in a stronger and more consistent knowledge model. On the other hand, numerous services are provided to serve the large population of users that every day navigates on the web. Many of those services are developed by means of web portals, which have become easy and useful tools to capture and manage huge volumes of information. Employment is one of the sectors to which authorities worldwide have paid much attention in the last years due to its social importance. In line with this, several web portals have been implemented related to the employment domain and, in general, they have been well accepted by the users. However, current unemployment portals do not make use of the advantages provided by semantics-related techniques. In this work, a public web portal developed by using semantic web technologies (i.e. ontologies) is presented. Thus, a semantics-based design has been applied to the development of this employment web portal. To be more precise, ontology has been built to guide and support the development of that portal. This facilitates the implementation of a semantic matching engine in the application between offers and requests. For it, an ontology-guided intelligent search has been used, so that the offers in which a user is interested can be obtained. The referred web portal is nowadays facilitating the access to the labour market, specially for users from the North-west of the region of Murcia, which is located in the South-East of Spain. In fact, this web portal is an institutional meeting point for unemployed people and companies offering job positions and formation opportunities in the aforementioned geographical region. The structure of the remainder of this paper is as follows. In Section 2, some notes on ontological engineering and the use of ontologies in web portals are presented. Section 3 describes the ontological model used in the work described here. The domain ontology designed is presented in Section 4. The design of the web portal is discussed in Section 5, whereas its validation process is explained in Section 6. Finally, some related work and conclusions are put forward in Section 7.

Traditionally, urban areas have been the targets for most of current job search tools. However, unemployment rates are higher in rural areas than in urban areas in some regions in the European Union. Actually, this is a major concern in current European policies seeking to promote regional development. Hence, it is important to target these rural areas with the support of information technologies so that job search processes can be facilitated. In this work, an employment web portal has been developed. The main differentiating component for this portal is the use of ontology for representing the domain knowledge. This ontology has been used to guide the design of the application and to supply the system with semantic possibilities. There exist several employment portals with a similar functionality to that presented by our system such as Infojobs6, Monster7, Tecnoempleo8, etc. All these employment portals are quite similar one another but whereas some are restricted to a national domain, others deal with the international market of employment. Some handle all possible fields and others are restricted to specific areas such as Tecnoempleo (employment in computer science, telecommunication and technologies). None of them is bounded to rural areas unlike ours (particularly to the North-west of the region of Murcia). So, the first advantage of our system comes from the advantages of rural environments, namely, the application is restricted to a small region where people can know the company that advertises offers in the system. Another advantage of our application is its simplicity of use for the user and its capacity to help users to add information quickly. As it was aforementioned, the use of ontologies helped to model the domain in a reusable, shareable and more efficient way. The restrictions included in the ontology facilitated the system capability for predetermining allowed values for most attributes. This simplifies the user labour. The use of ontologies as a modelling instrument implies other important advantages. On the one hand, it allows the system to check, automatically in most cases, for the consistence of the information introduced by the user, so preventing it from accepting information inconsistencies. On the other hand, the ontology model allowed us to define a second-generation search engine, that is, an ontology-guided search engine. To be more precise, the matching between the applicant profiles and job offers is semantically performed, as well as the searches for applicants and offers. Provided that the concepts ‘Applicant’ and ‘Employment Advertisement’ are related in the ontology by means of a common concept, namely ‘Profile’, the search process to match suitable employment advertisements with a concrete applicant can be performed more efficiently returning solely the offers the applicant can really be interested in. In addition, the ontological design includes the most frequent descriptors in the action field (i.e. rural areas). Then, only descriptors useful for rural areas have been taken in account. Besides, the implementation process guided by the structure provided by the ontology model has been very fast, decreasing to 6 month the work of a year.