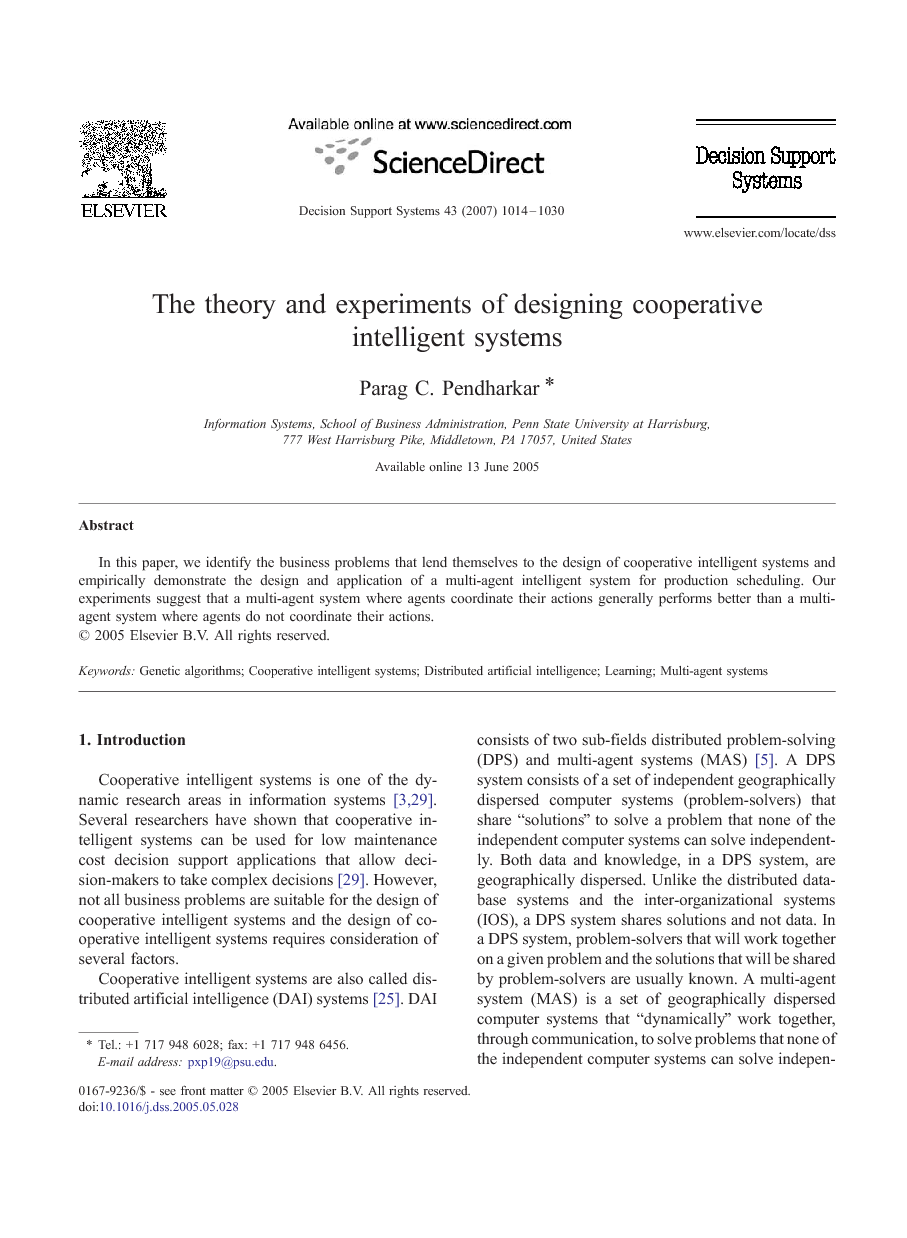 Cooperative intelligent systems is one of the dynamic research areas in information systems [3] and [29]. Several researchers have shown that cooperative intelligent systems can be used for low maintenance cost decision support applications that allow decision-makers to take complex decisions [29]. However, not all business problems are suitable for the design of cooperative intelligent systems and the design of cooperative intelligent systems requires consideration of several factors. Cooperative intelligent systems are also called distributed artificial intelligence (DAI) systems [25]. DAI consists of two sub-fields distributed problem-solving (DPS) and multi-agent systems (MAS) [5]. A DPS system consists of a set of independent geographically dispersed computer systems (problem-solvers) that share “solutions” to solve a problem that none of the independent computer systems can solve independently. Both data and knowledge, in a DPS system, are geographically dispersed. Unlike the distributed database systems and the inter-organizational systems (IOS), a DPS system shares solutions and not data. In a DPS system, problem-solvers that will work together on a given problem and the solutions that will be shared by problem-solvers are usually known. A multi-agent system (MAS) is a set of geographically dispersed computer systems that “dynamically” work together, through communication, to solve problems that none of the independent computer systems can solve independently. Unlike a DPS system, computer systems that will work together to solve a given problem are not known in a MAS and are decided dynamically. Further, communication among computer systems in a MAS can be data, hypotheses and knowledge. Multi-agent systems are of considerable complexity with respect to their functionality and structure [43]. For most application tasks, even in simple environments, it is difficult to determine the behavioral repertoire of an agent in a multi-agent system [43]. For example, determining behavioral repertoire of an agent in a multi-agent system requires a decision-maker to have a priori knowledge of future environmental requirements, knowledge of the availability of each agent at each environmental state in the future and knowledge about how agents will interact in response to the future environmental requirements [43]. The lack of availability of a priori knowledge necessitates the design of an adaptive system that can react to uncertain dynamic situations. A MAS offers features such as parallelism, robustness and scalability, which cannot be handled by centralized systems [43]. In particular, a MAS is used in domains that require integration of knowledge from multiple sources, resolution of different interests and goal conflicts [43]. Learning coordination in a MAS requires that agents adapt, adjust and learn to work with others agents to solve problems. The key issues of learning effective coordination in a MAS are the information exchange scheme and the coordination strategies between loosely coupled agents to achieve effective overall system performance. Given the complexity of designing a MAS, the current research aims to address the following issues. (1) What types of business situations are suitable for deploying a multi-agent system? And, (2) what are different design considerations related to a multi-agent system design? We answer both of these questions through literature review and an empirical demonstration of a multi-agent intelligent system for a production scheduling environment. The rest of the paper is organized as follows: in Section 2, we review available literature in cooperative intelligent systems (DPS and MAS) area. In Section 3, we describe a production scheduling problem, a framework for genetic algorithm (GA)-based learning and different types of coordination groups, and propose a general multi-agent coordination strategy. In Section 4, we detail the results of our simulation experiments and statistical analyses. In Section 5, we conclude the research by describing significance of our research and highlighting possible future extensions.