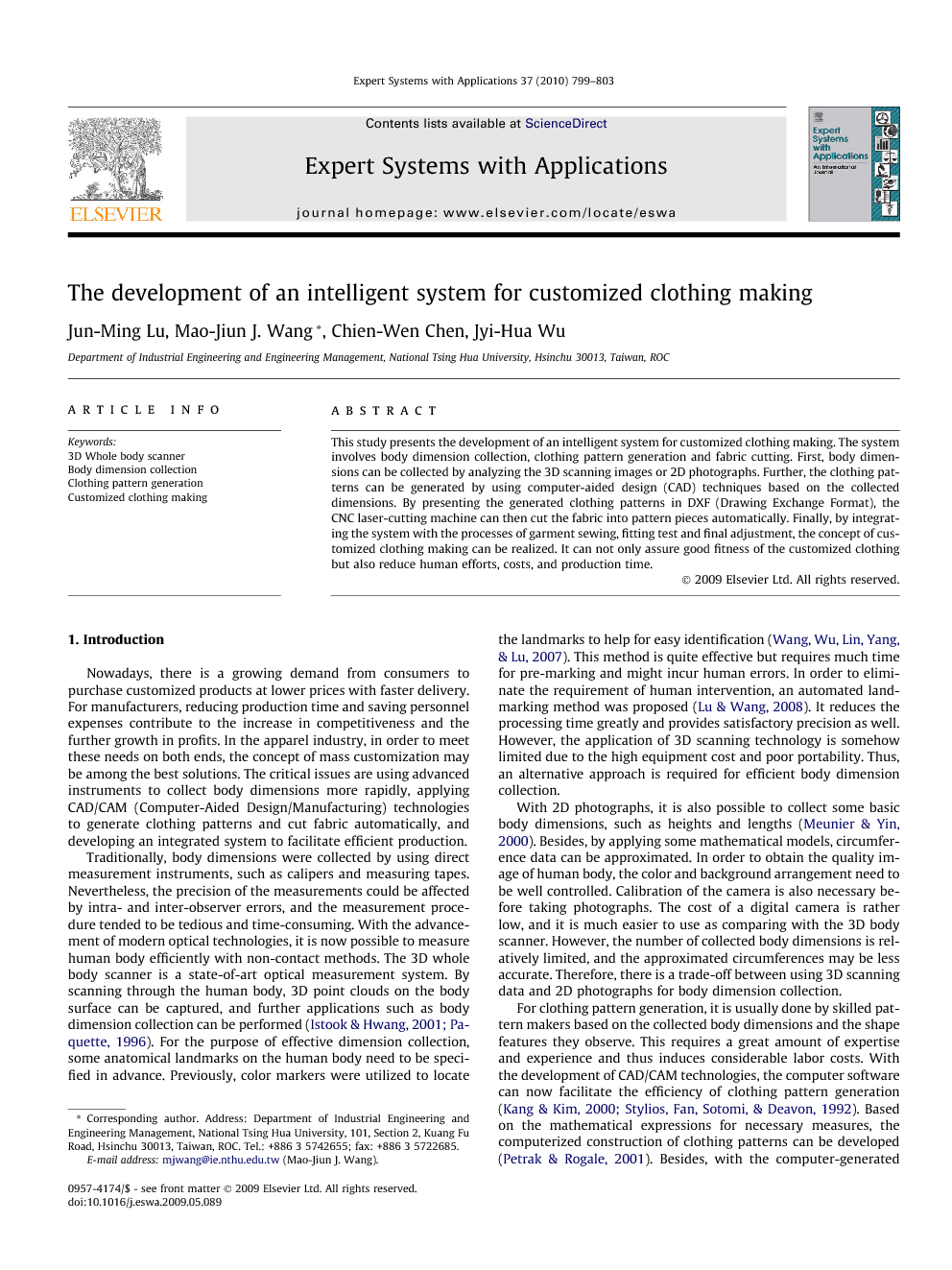 This study presents the development of an intelligent system for customized clothing making. The system involves body dimension collection, clothing pattern generation and fabric cutting. First, body dimensions can be collected by analyzing the 3D scanning images or 2D photographs. Further, the clothing patterns can be generated by using computer-aided design (CAD) techniques based on the collected dimensions. By presenting the generated clothing patterns in DXF (Drawing Exchange Format), the CNC laser-cutting machine can then cut the fabric into pattern pieces automatically. Finally, by integrating the system with the processes of garment sewing, fitting test and final adjustment, the concept of customized clothing making can be realized. It can not only assure good fitness of the customized clothing but also reduce human efforts, costs, and production time.

Nowadays, there is a growing demand from consumers to purchase customized products at lower prices with faster delivery. For manufacturers, reducing production time and saving personnel expenses contribute to the increase in competitiveness and the further growth in profits. In the apparel industry, in order to meet these needs on both ends, the concept of mass customization may be among the best solutions. The critical issues are using advanced instruments to collect body dimensions more rapidly, applying CAD/CAM (Computer-Aided Design/Manufacturing) technologies to generate clothing patterns and cut fabric automatically, and developing an integrated system to facilitate efficient production. Traditionally, body dimensions were collected by using direct measurement instruments, such as calipers and measuring tapes. Nevertheless, the precision of the measurements could be affected by intra- and inter-observer errors, and the measurement procedure tended to be tedious and time-consuming. With the advancement of modern optical technologies, it is now possible to measure human body efficiently with non-contact methods. The 3D whole body scanner is a state-of-art optical measurement system. By scanning through the human body, 3D point clouds on the body surface can be captured, and further applications such as body dimension collection can be performed (Istook and Hwang, 2001 and Paquette, 1996). For the purpose of effective dimension collection, some anatomical landmarks on the human body need to be specified in advance. Previously, color markers were utilized to locate the landmarks to help for easy identification (Wang, Wu, Lin, Yang, & Lu, 2007). This method is quite effective but requires much time for pre-marking and might incur human errors. In order to eliminate the requirement of human intervention, an automated landmarking method was proposed (Lu & Wang, 2008). It reduces the processing time greatly and provides satisfactory precision as well. However, the application of 3D scanning technology is somehow limited due to the high equipment cost and poor portability. Thus, an alternative approach is required for efficient body dimension collection. With 2D photographs, it is also possible to collect some basic body dimensions, such as heights and lengths (Meunier & Yin, 2000). Besides, by applying some mathematical models, circumference data can be approximated. In order to obtain the quality image of human body, the color and background arrangement need to be well controlled. Calibration of the camera is also necessary before taking photographs. The cost of a digital camera is rather low, and it is much easier to use as comparing with the 3D body scanner. However, the number of collected body dimensions is relatively limited, and the approximated circumferences may be less accurate. Therefore, there is a trade-off between using 3D scanning data and 2D photographs for body dimension collection. For clothing pattern generation, it is usually done by skilled pattern makers based on the collected body dimensions and the shape features they observe. This requires a great amount of expertise and experience and thus induces considerable labor costs. With the development of CAD/CAM technologies, the computer software can now facilitate the efficiency of clothing pattern generation (Kang and Kim, 2000 and Stylios et al., 1992). Based on the mathematical expressions for necessary measures, the computerized construction of clothing patterns can be developed (Petrak & Rogale, 2001). Besides, with the computer-generated digital human models, patterns can be created and visualized in a virtual environment (Kang and Kim, 2000 and Petrak and Rogale, 2006). Due to the consistency of computer programs, patterns can be generated using the same rules repeatedly. Moreover, the data can be stored and retrieved with ease. It has the flexibility of generating a different type of clothing pattern rapidly without taking the measurements again. As for fabric cutting, the CAD/CAM technology also enables automatic fabric cutting based on the patterns being generated by the CAD system. As mentioned above, there are some existing technologies enabling the automation of customized clothing making. However, it lacks thorough development and efficient integration of the respective processes. Thus, in this study, an integrated system was proposed for customized clothing making, including body dimension collection, garment pattern generation and fabric cutting. The two methods of body dimension collection are illustrated in the following section. Then the procedure of clothing pattern generation and fabric cutting are described in the next section. Finally, the integration and application of the system are presented.

An intelligent system for customized clothing making has been developed in this study. The system involves body dimension collection, clothing pattern generation and fabric cutting. Two alternatives for body dimension collection were proposed, by using either the 3D scanning data or the 2D photographs. By referring the rules of pattern making, the collected dimensions can be further converted to a graphical representation of clothing patterns in CAD format. Then the CNC laser-cutting machine can automate fabric cutting. By integrating the system with the processes of garment sewing, fitting test and final adjustment, the concept of mass customization can be realized. Besides, by testing on a scaled human model, the system has been proved to be feasible for practical applications. It cannot only assure good fitness of the customized clothing but also reduce human efforts, costs, and production time.