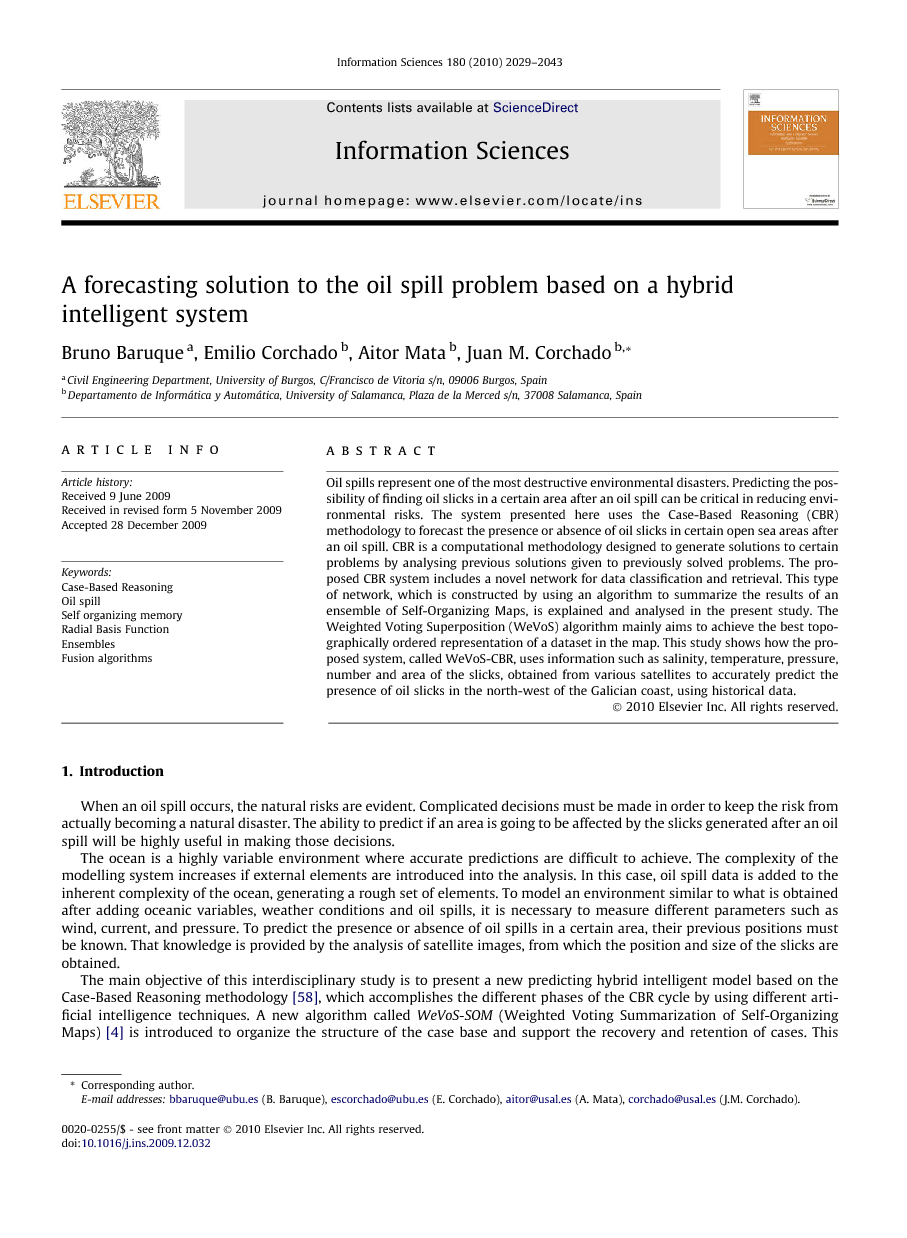 Oil spills represent one of the most destructive environmental disasters. Predicting the possibility of finding oil slicks in a certain area after an oil spill can be critical in reducing environmental risks. The system presented here uses the Case-Based Reasoning (CBR) methodology to forecast the presence or absence of oil slicks in certain open sea areas after an oil spill. CBR is a computational methodology designed to generate solutions to certain problems by analysing previous solutions given to previously solved problems. The proposed CBR system includes a novel network for data classification and retrieval. This type of network, which is constructed by using an algorithm to summarize the results of an ensemble of Self-Organizing Maps, is explained and analysed in the present study. The Weighted Voting Superposition (WeVoS) algorithm mainly aims to achieve the best topographically ordered representation of a dataset in the map. This study shows how the proposed system, called WeVoS-CBR, uses information such as salinity, temperature, pressure, number and area of the slicks, obtained from various satellites to accurately predict the presence of oil slicks in the north-west of the Galician coast, using historical data.

When an oil spill occurs, the natural risks are evident. Complicated decisions must be made in order to keep the risk from actually becoming a natural disaster. The ability to predict if an area is going to be affected by the slicks generated after an oil spill will be highly useful in making those decisions. The ocean is a highly variable environment where accurate predictions are difficult to achieve. The complexity of the modelling system increases if external elements are introduced into the analysis. In this case, oil spill data is added to the inherent complexity of the ocean, generating a rough set of elements. To model an environment similar to what is obtained after adding oceanic variables, weather conditions and oil spills, it is necessary to measure different parameters such as wind, current, and pressure. To predict the presence or absence of oil spills in a certain area, their previous positions must be known. That knowledge is provided by the analysis of satellite images, from which the position and size of the slicks are obtained. The main objective of this interdisciplinary study is to present a new predicting hybrid intelligent model based on the Case-Based Reasoning methodology [58], which accomplishes the different phases of the CBR cycle by using different artificial intelligence techniques. A new algorithm called WeVoS-SOM (Weighted Voting Summarization of Self-Organizing Maps) [4] is introduced to organize the structure of the case base and support the recovery and retention of cases. This novel algorithm improves the results obtained by previous methods [17]. The reuse phase is accomplished by applying the Growing RBF Network (GRBF) [30], a version of the classic Radial Basis Function neural network, which adapts itself to the data and grows as the case base grows. In the revision phase, explanations, which are an automatic way of justifying the solutions generated by the system, are used to internally justify the solution proposed. The WeVoS-CBR system presented here has been applied specifically to the data obtained after the Prestige accident in the north-west of Spain. However, the generalization capabilities of the CBR systems will permit the WeVoS-CBR system to be applied to other geographical areas and other natural phenomena by slightly adapting the system, which is something quite difficult to achieve with the existing approximations to this kind of problems. The development of this system was possible thanks to a project founded by the Spanish Ministry of Science and Technology after the Prestige accident. Most of the data used to develop the proposed system was acquired from the ECCO (Estimating the Circulation and Climate of the Ocean) consortium [37]. Data related to the oil slicks, including their position and size, were obtained by studying SAR (Synthetic Aperture Radar) satellite images [39]. CBR systems have the ability to learn from past situations, and to generate solutions to new problems based on past solutions given to past problems. The system presented in this study combines the efficiency of the CBR systems with other artificial intelligence techniques in order to improve the results and to better generalize from past data. The generalization capabilities of the CBR systems permit this new system to extend the results obtained in the analyzed area to other open ocean areas. This is quite an innovative approach that improves the classic mathematical models, which are incapable of generating possibilities, by applying them to specific local regions. Several forecasting models have been applied to specific geographical zones, where the oceanic behaviour is quite unusual [42], but there does not exist a generic model, such as the one presented in this study, that can be applied in any open ocean region. Hybrid models can use both data and knowledge to forecast trajectories and evaluate possible risks after an oil spill [29]. The hybrid intelligent system proposed in this research incorporates a new ensemble summarization algorithm. The WeVoS-SOM algorithm [4] performs the classifications tasks in the CBR structure when creating the case base. This algorithm creates an inner structure within the case base that makes it easier to recover the cases by grouping similar cases together. When a new problem must be solved and the similar cases should be retrieved from the case base, it is very important to recover those cases quickly and accurately. An internal structure such as the one generated by the WeVoS-SOM model is crucial in this kind of system. When the similar cases are stored close one to another, then the recovery process does not need to search the entire case base, but only those elements close to the required one, which implies a great reduction of time. The following section explains the oil spill problem, as well as some previous solutions and models used to try to solve that problem. The Section 3 provices a brief explanation of the CBR methodology detailing the different phases of the CBR cycle and some current applications of the CBR methodology. In Section 4, the WeVoS algorithm is developed, including its SOM foundation characteristics [31]. Finally, the hybrid system developed in this study is described, paying special attention to the different techniques used in the four main CBR phases, followed by the experimental results, conclusions and future work.

In this study, a new hybrid forecasting system called WeVoS-CBR was presented and explained. It is a new solution for predicting the presence or absence of oil slicks in a certain sea area after an oil spill. This system used data acquired from different orbital satellites in order to create a CBR environment. The data must be previously adapted to the structure required by the CBR system in order to be stored as a case. The explained system uses different artificial intelligence techniques in order to obtain a correct prediction. A new summarization algorithm, the Weighted Voting Superposition algorithm, was applied to the SOM (WeVoS-SOM) and used both to organize the case base and to retrieve the most similar cases to the one introduced as a problem to the system. The great organization capabilities of the new algorithm allow the system to create a valid structure for the case base and to easily recover similar cases from the case base. To obtain a prediction using the cases recovered from the case base, Growing Radial Basis Function Networks were used. The evolution of the RBF networks implies a better adaptation to the structure of the case base, which is organized using the WeVoS-SOM algorithm. The results using Growing RBF networks instead of simple RBF networks are about a 4% more accurate (average improvement of the different sizes considered of case base), as can be seen in Table 2 and Fig. 7, which is a good improvement. The improvement is calculated by considering the average of the different measurements done. The system’s predictive ability was proved with previously known conditions, and showed better results than previously used techniques. As shown in Table 2 and Fig. 7, the use of a combination of techniques within the WeVoS-CBR system makes it possible to obtain better results than when using the CBR alone (17% better by average, see Table 2), and also better than using isolated techniques, without the integration feature produced by the CBR (11% better by average, see Table 2). This model may be used in other oceanic areas if historical data is available or if this historical data can be generated by expert oceanographers. The next step is to generalize the learning, acquiring new data to create a base of cases big enough to have solutions for every season. Another improvement is to create an on-line system that can store the case base in a server and generate the solutions dynamically in response to different requests. The on-line version will include real time connection to data servers providing weather information of the current situations in order to predict real future situations. Another line of future work will be focused on the application of different topology preserving models such as the ViSOM to improve the pattern recognition and clustering features of this system. Also different cases of study will be contemplated.