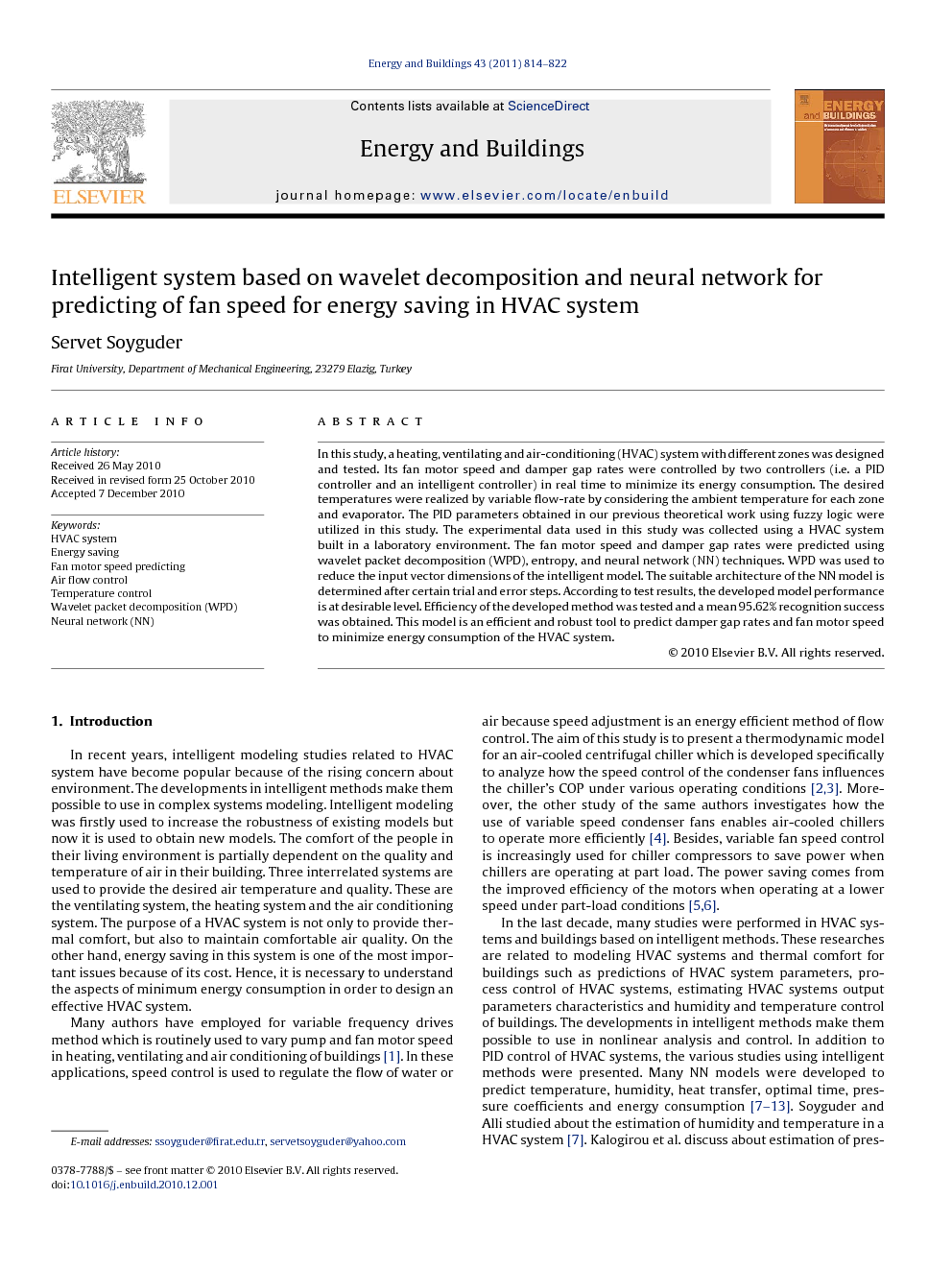 In this study, a heating, ventilating and air-conditioning (HVAC) system with different zones was designed and tested. Its fan motor speed and damper gap rates were controlled by two controllers (i.e. a PID controller and an intelligent controller) in real time to minimize its energy consumption. The desired temperatures were realized by variable flow-rate by considering the ambient temperature for each zone and evaporator. The PID parameters obtained in our previous theoretical work using fuzzy logic were utilized in this study. The experimental data used in this study was collected using a HVAC system built in a laboratory environment. The fan motor speed and damper gap rates were predicted using wavelet packet decomposition (WPD), entropy, and neural network (NN) techniques. WPD was used to reduce the input vector dimensions of the intelligent model. The suitable architecture of the NN model is determined after certain trial and error steps. According to test results, the developed model performance is at desirable level. Efficiency of the developed method was tested and a mean 95.62% recognition success was obtained. This model is an efficient and robust tool to predict damper gap rates and fan motor speed to minimize energy consumption of the HVAC system.

In recent years, intelligent modeling studies related to HVAC system have become popular because of the rising concern about environment. The developments in intelligent methods make them possible to use in complex systems modeling. Intelligent modeling was firstly used to increase the robustness of existing models but now it is used to obtain new models. The comfort of the people in their living environment is partially dependent on the quality and temperature of air in their building. Three interrelated systems are used to provide the desired air temperature and quality. These are the ventilating system, the heating system and the air conditioning system. The purpose of a HVAC system is not only to provide thermal comfort, but also to maintain comfortable air quality. On the other hand, energy saving in this system is one of the most important issues because of its cost. Hence, it is necessary to understand the aspects of minimum energy consumption in order to design an effective HVAC system. Many authors have employed for variable frequency drives method which is routinely used to vary pump and fan motor speed in heating, ventilating and air conditioning of buildings [1]. In these applications, speed control is used to regulate the flow of water or air because speed adjustment is an energy efficient method of flow control. The aim of this study is to present a thermodynamic model for an air-cooled centrifugal chiller which is developed specifically to analyze how the speed control of the condenser fans influences the chiller's COP under various operating conditions [2] and [3]. Moreover, the other study of the same authors investigates how the use of variable speed condenser fans enables air-cooled chillers to operate more efficiently [4]. Besides, variable fan speed control is increasingly used for chiller compressors to save power when chillers are operating at part load. The power saving comes from the improved efficiency of the motors when operating at a lower speed under part-load conditions [5] and [6]. In the last decade, many studies were performed in HVAC systems and buildings based on intelligent methods. These researches are related to modeling HVAC systems and thermal comfort for buildings such as predictions of HVAC system parameters, process control of HVAC systems, estimating HVAC systems output parameters characteristics and humidity and temperature control of buildings. The developments in intelligent methods make them possible to use in nonlinear analysis and control. In addition to PID control of HVAC systems, the various studies using intelligent methods were presented. Many NN models were developed to predict temperature, humidity, heat transfer, optimal time, pressure coefficients and energy consumption [7], [8], [9], [10], [11], [12] and [13]. Soyguder and Alli studied about the estimation of humidity and temperature in a HVAC system [7]. Kalogirou et al. discuss about estimation of pressure coefficients in a naturally ventilated test room using artificial neural networks [8]. Yang et al. performed energy prediction for a building using adaptive artificial neural networks [10]. Yang et al. used application of artificial neural network to predict the optimal start time for heating system in building and HVAC system [11]. Sablani et al. developed an ANN model for calculating thermal conductivity of a variety of bakery products under a wide range of conditions of moisture content, temperature in bakery story [12]. In another study, Ben-Nakhi and Mahmoud worked about general regression neural networks (GRNN) and designed the GRNN and trained to investigate the feasibility of using this technology to optimize HVAC thermal energy storage in public buildings as well as office buildings [14]. Consequently, many studies about artificial neural network and intelligent method can be mentioned [15], [16], [17], [18] and [19]. In this study, based on the above literature the required fan motor speed to minimize energy consumption and the required damper gap rates for obtaining the desired temperatures of two different zones for each time step were found using intelligent control algorithm. The damper gap rate is also proportional with air flow rate. Besides, in this study, an intelligent system for fan motor speed and air flow control of HVAC system based on WPD-NN is presented. All simulations have shown that the proposed method is more effective and controls the systems quite well. The outline of the present paper is as follows. In Section 2, the model of the HVAC system is presented. The design of the considered real-time HVAC system is given Section 3. Section 4 briefly describes the wavelet transform (WT), WPD and NN. In Section 5, model procedure was designed about the wavelet packet and NN structure for intelligent modeling. Then, in Section 6, the experimental and modeling results are presented. In the experiment, the fan motor speed and the damper gap rate being proportional with air flow rate have been controlled using WPD-NN. In Section 7 was discussed the strengths and weaknesses of the present study. Finally, conclusions are given in Section 8.

In this study, the cooling process of the system was realized by being cooled the two different zones from the ambient temperature 26.4 °C to the desired temperatures. The required fan motor speed to minimize energy consumption and the required damper gap rates for obtaining the desired temperatures of two different zones for each time step were found using intelligent control algorithm. The fan motor speed was controlled using the required temperature for the evaporator while the dampers were controlled using the required temperatures for the Zone-1 and Zone-2. In this work, the fan motor speed to minimize energy consumption and the damper gap rates of a HVAC system with two zones were predicted using WPD-NN method. This work indicates the use of wavelet packet decomposition and NN for feature extracting and classification in intelligent modeling. The most important aspect of the intelligent model is the ability of self-organization of the WPD-NN without requirements of programming and the immediate response of a trained net during real-time applications. These features make the intelligent model suitable for complex systems. These results point out the ability of design of a new intelligence model. This means that with this method, new information can be accessed with an approach different from the traditional analysis methods. In addition, this paper shows that the values predicted with the WPD-NN can be used to predict fan motor speed and damper gap rate of HVAC system quite accurately. Therefore, the test results of the realized model are showed the advantages of intelligent modeling; it is rapid, easy to operate, non-invasive, and not expensive.