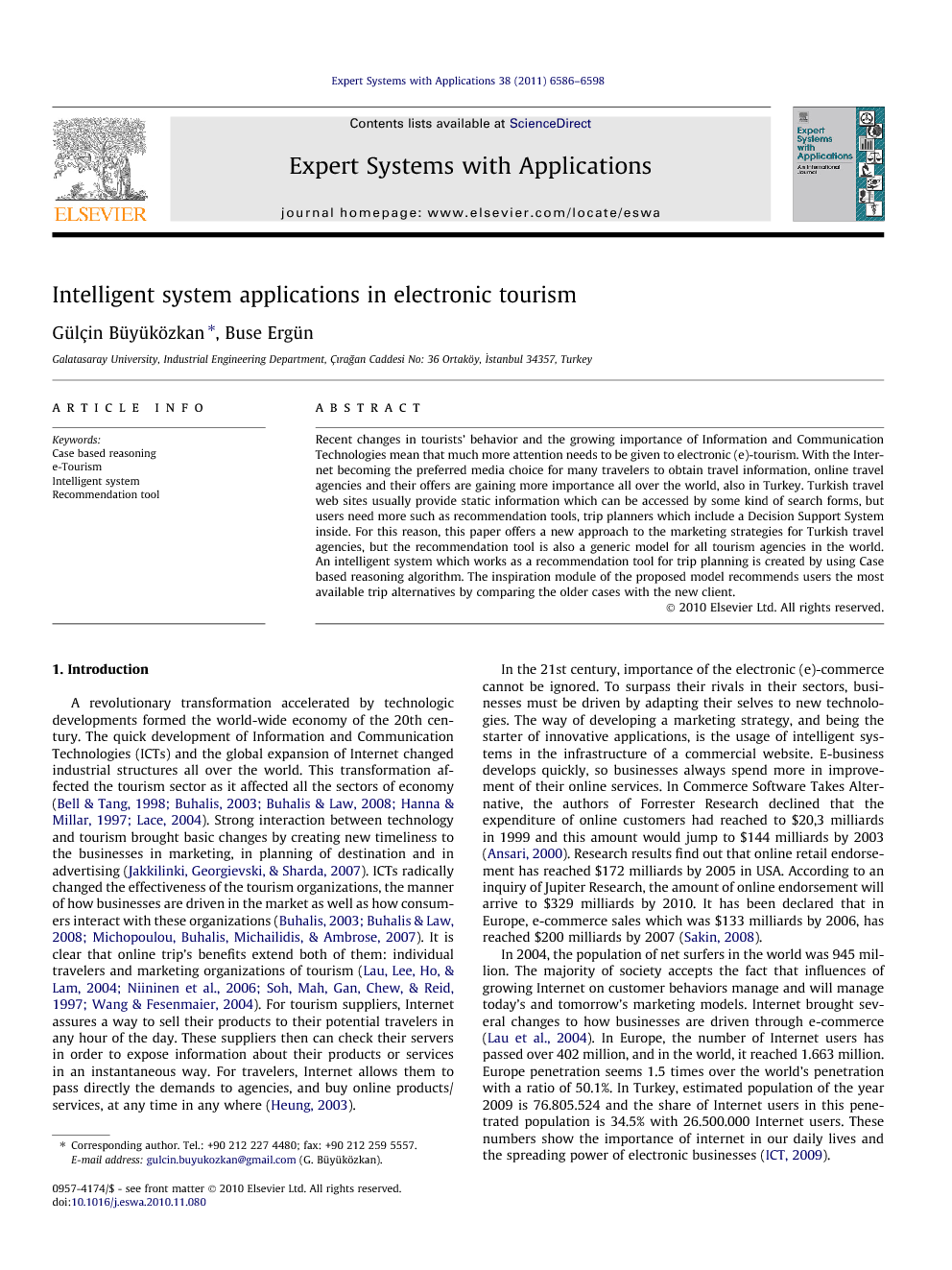 Recent changes in tourists’ behavior and the growing importance of Information and Communication Technologies mean that much more attention needs to be given to electronic (e)-tourism. With the Internet becoming the preferred media choice for many travelers to obtain travel information, online travel agencies and their offers are gaining more importance all over the world, also in Turkey. Turkish travel web sites usually provide static information which can be accessed by some kind of search forms, but users need more such as recommendation tools, trip planners which include a Decision Support System inside. For this reason, this paper offers a new approach to the marketing strategies for Turkish travel agencies, but the recommendation tool is also a generic model for all tourism agencies in the world. An intelligent system which works as a recommendation tool for trip planning is created by using Case based reasoning algorithm. The inspiration module of the proposed model recommends users the most available trip alternatives by comparing the older cases with the new client.

A revolutionary transformation accelerated by technologic developments formed the world-wide economy of the 20th century. The quick development of Information and Communication Technologies (ICTs) and the global expansion of Internet changed industrial structures all over the world. This transformation affected the tourism sector as it affected all the sectors of economy (Bell and Tang, 1998, Buhalis, 2003, Buhalis and Law, 2008, Hanna and Millar, 1997 and Lace, 2004). Strong interaction between technology and tourism brought basic changes by creating new timeliness to the businesses in marketing, in planning of destination and in advertising (Jakkilinki, Georgievski, & Sharda, 2007). ICTs radically changed the effectiveness of the tourism organizations, the manner of how businesses are driven in the market as well as how consumers interact with these organizations (Buhalis, 2003, Buhalis and Law, 2008 and Michopoulou et al., 2007). It is clear that online trip’s benefits extend both of them: individual travelers and marketing organizations of tourism (Lau et al., 2004, Niininen et al., 2006, Soh et al., 1997 and Wang and Fesenmaier, 2004). For tourism suppliers, Internet assures a way to sell their products to their potential travelers in any hour of the day. These suppliers then can check their servers in order to expose information about their products or services in an instantaneous way. For travelers, Internet allows them to pass directly the demands to agencies, and buy online products/services, at any time in any where (Heung, 2003). In the 21st century, importance of the electronic (e)-commerce cannot be ignored. To surpass their rivals in their sectors, businesses must be driven by adapting their selves to new technologies. The way of developing a marketing strategy, and being the starter of innovative applications, is the usage of intelligent systems in the infrastructure of a commercial website. E-business develops quickly, so businesses always spend more in improvement of their online services. In Commerce Software Takes Alternative, the authors of Forrester Research declined that the expenditure of online customers had reached to $20,3 milliards in 1999 and this amount would jump to $144 milliards by 2003 (Ansari, 2000). Research results find out that online retail endorsement has reached $172 milliards by 2005 in USA. According to an inquiry of Jupiter Research, the amount of online endorsement will arrive to $329 milliards by 2010. It has been declared that in Europe, e-commerce sales which was $133 milliards by 2006, has reached $200 milliards by 2007 (Sakin, 2008). In 2004, the population of net surfers in the world was 945 million. The majority of society accepts the fact that influences of growing Internet on customer behaviors manage and will manage today’s and tomorrow’s marketing models. Internet brought several changes to how businesses are driven through e-commerce (Lau et al., 2004). In Europe, the number of Internet users has passed over 402 million, and in the world, it reached 1.663 million. Europe penetration seems 1.5 times over the world’s penetration with a ratio of 50.1%. In Turkey, estimated population of the year 2009 is 76.805.524 and the share of Internet users in this penetrated population is 34.5% with 26.500.000 Internet users. These numbers show the importance of internet in our daily lives and the spreading power of electronic businesses (ICT, 2009). The goal of this paper is to analyze the concept of electronic (e)-tourism, to understand what intelligent systems are, and to propose an online travel agency model which works by an algorithm of Case based reasoning (CBR) that replies automatically to the users, by analyzing customer behaviors. The reason of the choice of this technique is that tourism concept depends on the experiences. A system using old cases that contain travel preferences will obtain more convenient solutions than the existing systems. It is desired to create a recommendation unit within the framework of intelligent systems suitable to tourism concept. Therefore, CBR seemed the closest solution to this wish. In addition, there are several studies and applications realized about e-tourism using the method CBR (Cavada et al., 2003 and Venturini and Ricci, 2006) which confirms the appropriateness of its use in this study. The organization of the paper is as follows: In the second section, the definition and the situation of e-tourism is presented. Then, in the third section the method which is used for this paper, CBR, will be studied. A case study will be shown and explained in detail in the fourth section with examples and in the last section, the obtained results are discussed and concluded the paper.

The goal of this work was to propose an intelligent module integrated to a tourism website that helps the customers in their choice of trip destination during their decision-making process as a marketing strategy in e-tourism. The module creation necessitates a well comprehension of e-commerce concept, and precisely e-tourism, as well as the intelligent system logic used in the e-tourism in the entire world. In this work, it is talked about the evolution of e-business and e-tourism, their infrastructures, their models and particularly benefits and their challenges. For businesses, travel agencies can adapt themselves to the changeable conditions of the current world; they must follow new technologies and integrate them to their structure. Intelligent systems, who act as agents and give responses after the analysis of customer’s behaviors and business strategies by using intelligent systems, are a way for travel agencies to develop marketing strategies and to get the upper hand on the competition. For this reason, the method to use for the proposed model was first determined. CBR algorithm, which is the resolution process of new problems based on similar old problems, was a better choice for the composed system, in the hypothesis that e-tourism is an activity domain where customers select products and similar services if their travel preferences are similar. At this stage, it was needed to determine which calculation manner of similarity coefficient would be realized. Among the formulas, Jaccard coefficient seemed to be the most fitting one to this problem for most of the studies of similarity coefficients in literature were dedicated to production sector. By inspiring from Jaccard coefficient, a new calculation model of weighted travel preferences could be developed. For the application party, it was necessary to realize many steps in order to compose a recommendation system to a travel agency. First of all, it was necessary to define the detailed structure of the proposed model. Next, a website research was made in the e-tourism market, to notice that despite developments in intelligent systems and their application examples such as “trip planner” in some websites in the world, there was not any illustration in Turkey. It was worked with the data and the experience of Jolly Tour that is one of the biggest Turkish travel agencies. Two databases were constructed, which were composed of a product catalog and a case base, then formed a user interface that asks users if they need any inspiration. The next step lay in preference definitions and their weight depending on their importance degrees, for a future comparison by algorithm. The last step was writing an algorithm that calculates the similarities between the cases, to propose customers three alternatives which are the most similar ones already selected by previous customers. In applications within the article, it was easily observable that the recommended results to customer profiles were not very far away from their constraints and their travel preferences. But it was clear that an expansion of case base could reinforce the credibility of obtained results. This article offers a new approach to the marketing strategies for Turkish travel agencies. Proposed model can be used as a recommendation module for the tourists who would visit the website of a Turkish travel agency. Furthermore, the application domain of the module can be widened and integrated in other domains of e-commerce, and also can be used as a generic model for all online travel agencies of all countries.