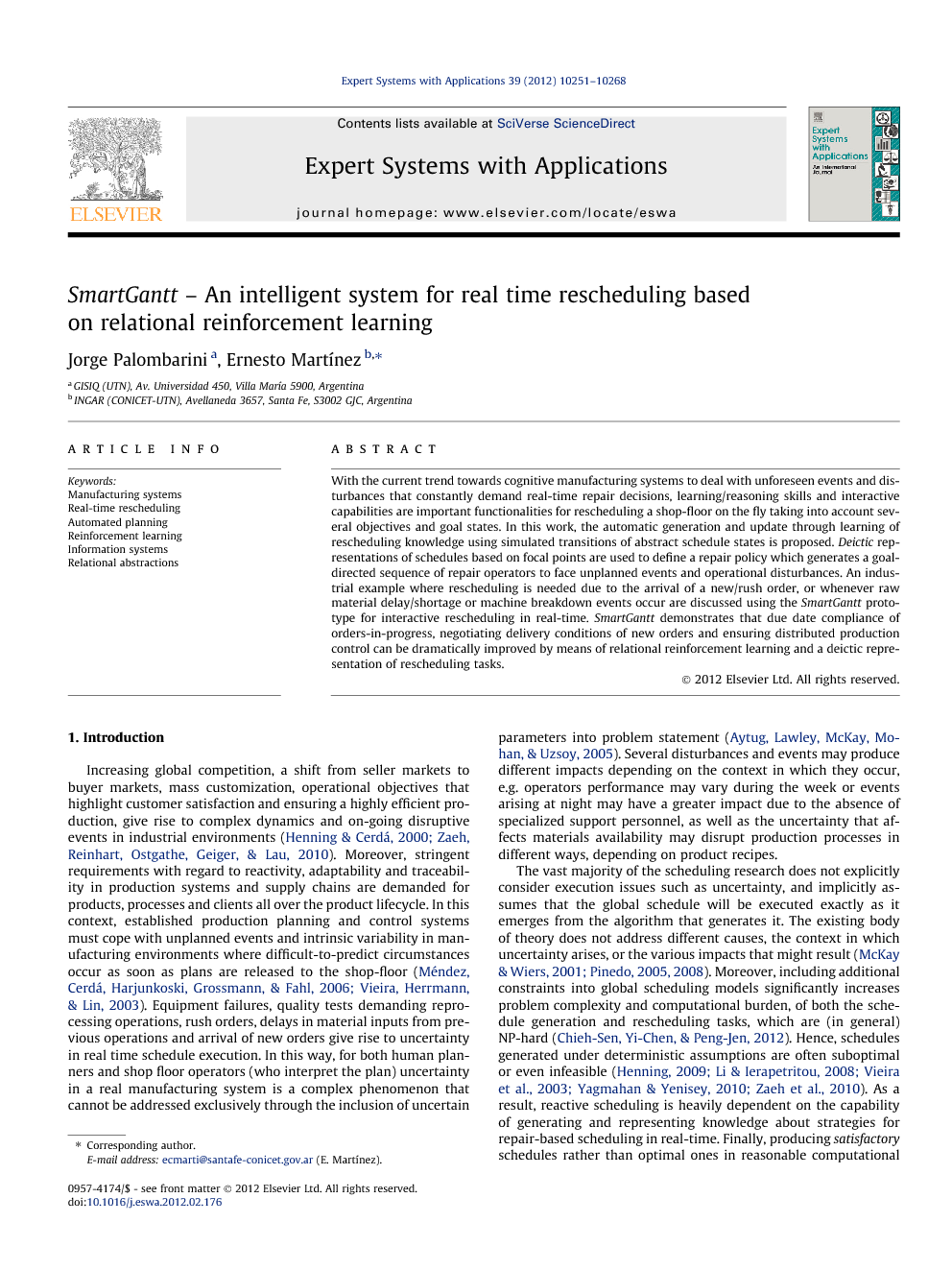 With the current trend towards cognitive manufacturing systems to deal with unforeseen events and disturbances that constantly demand real-time repair decisions, learning/reasoning skills and interactive capabilities are important functionalities for rescheduling a shop-floor on the fly taking into account several objectives and goal states. In this work, the automatic generation and update through learning of rescheduling knowledge using simulated transitions of abstract schedule states is proposed. Deictic representations of schedules based on focal points are used to define a repair policy which generates a goal-directed sequence of repair operators to face unplanned events and operational disturbances. An industrial example where rescheduling is needed due to the arrival of a new/rush order, or whenever raw material delay/shortage or machine breakdown events occur are discussed using the SmartGantt prototype for interactive rescheduling in real-time. SmartGantt demonstrates that due date compliance of orders-in-progress, negotiating delivery conditions of new orders and ensuring distributed production control can be dramatically improved by means of relational reinforcement learning and a deictic representation of rescheduling tasks.

A novel approach and a prototype application for – called SmartGantt – simulation-based learning of a relational policy dealing with automatic repair in real time of plans and schedules based on relational reinforcement learning has been proposed. The policy allows generation of a sequence of deictic (local) repair operators to achieve several rescheduling goals to handle abnormal and unplanned events such as inserting an arriving order with minimum tardiness based on a relational (deictic) representation of abstract schedule states, and repair operators. Representing schedule states using a relational (deictic) abstraction is not only efficient to profit from, but also potentially a very natural choice to mimic the human ability to deal with rescheduling problems, where relations between objects and focal points for defining repair strategies are typically used. These repair policies relies on abstract states, which are induced for generalizing and abstracting ground examples of schedules, allowing the use of a compact representation of the rescheduling problem. Abstract schedule states and repair actions facilitates and accelerates learning and knowledge transferring, which is independent of the type of event that has generated a disruption and can be used reactively in real-time. An additional advantage provided by the relational (deictic) representation of schedule (abstract) states and operators is that, relying in an appropriate and well designed set of background knowledge rules, it enables the automatic generation through inductive logic programming of heuristics that can be naturally understood by the end-user, and facilitates tasks like “what–if” analysis, interactive rescheduling and decision support. Scale-up reinforcement learning using relational modeling of rescheduling situations based on simulated transitions is a very appealing approach to compile a vast amount of knowledge about repair policies, where different types of abnormal events (order insertion, extruder failure, rush orders, reprocessing needed, etc.) can be generated separately and then compiled in the relational regression tree, regardless of the event used to generate the examples (triplets). This is another very appealing advantage of the proposed approach, since the repair policy can be used online to handle disruptive events that are even different from the ones used to generate the Q-function; once this function is known, reactive scheduling is straightforward. Finally, relational reinforcement learning favors denotational concept semantics in the communication between humans and SmartGantt. This capability of phrasing the rationale behind repair strategies so as to receive evaluative feedback verbally from human users is obviously highly useful in real-world applications of SmartGantt.