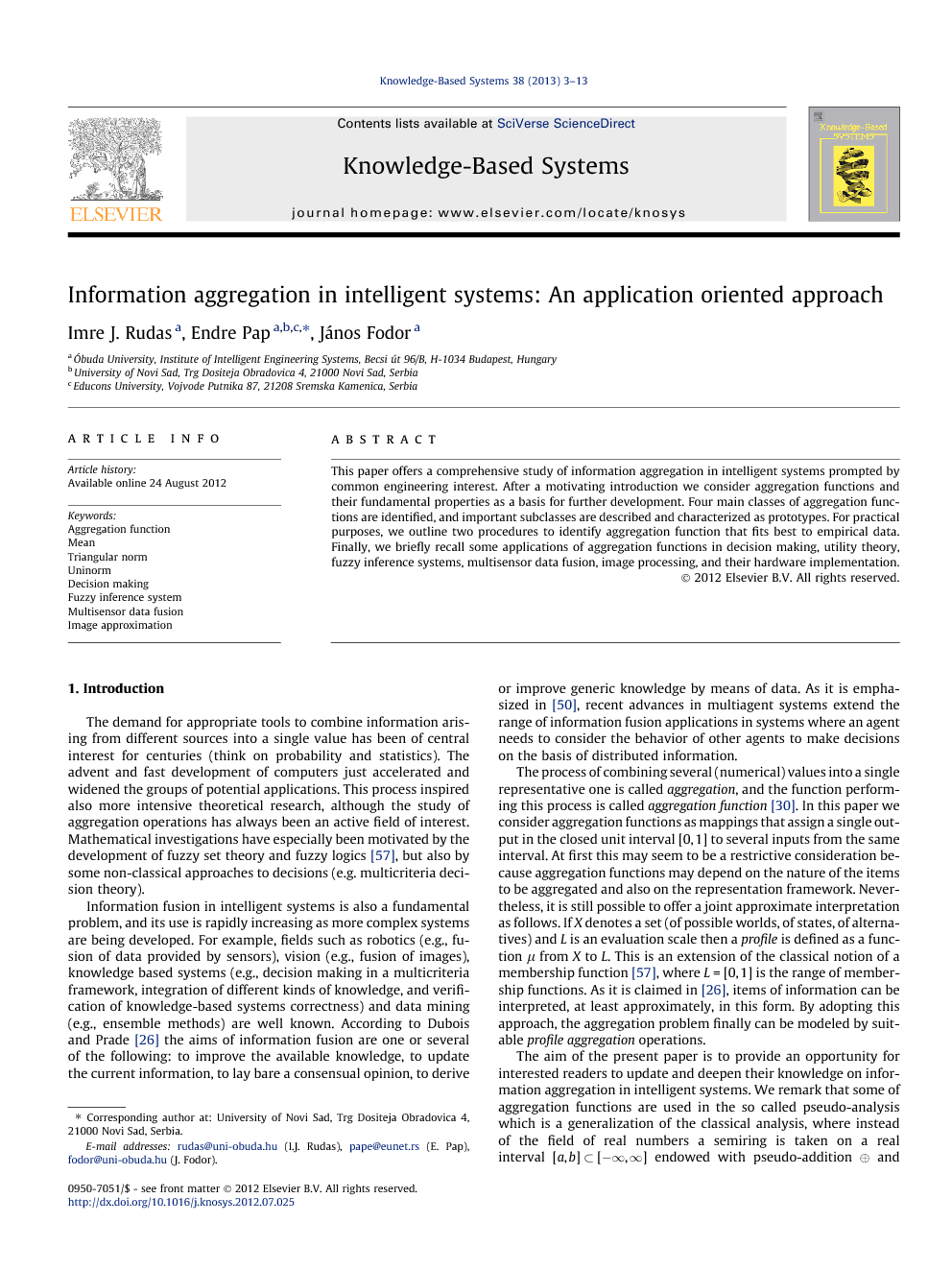 The demand for appropriate tools to combine information arising from different sources into a single value has been of central interest for centuries (think on probability and statistics). The advent and fast development of computers just accelerated and widened the groups of potential applications. This process inspired also more intensive theoretical research, although the study of aggregation operations has always been an active field of interest. Mathematical investigations have especially been motivated by the development of fuzzy set theory and fuzzy logics [57], but also by some non-classical approaches to decisions (e.g. multicriteria decision theory). Information fusion in intelligent systems is also a fundamental problem, and its use is rapidly increasing as more complex systems are being developed. For example, fields such as robotics (e.g., fusion of data provided by sensors), vision (e.g., fusion of images), knowledge based systems (e.g., decision making in a multicriteria framework, integration of different kinds of knowledge, and verification of knowledge-based systems correctness) and data mining (e.g., ensemble methods) are well known. According to Dubois and Prade [26] the aims of information fusion are one or several of the following: to improve the available knowledge, to update the current information, to lay bare a consensual opinion, to derive or improve generic knowledge by means of data. As it is emphasized in [50], recent advances in multiagent systems extend the range of information fusion applications in systems where an agent needs to consider the behavior of other agents to make decisions on the basis of distributed information. The process of combining several (numerical) values into a single representative one is called aggregation, and the function performing this process is called aggregation function[30]. In this paper we consider aggregation functions as mappings that assign a single output in the closed unit interval [0, 1] to several inputs from the same interval. At first this may seem to be a restrictive consideration because aggregation functions may depend on the nature of the items to be aggregated and also on the representation framework. Nevertheless, it is still possible to offer a joint approximate interpretation as follows. If X denotes a set (of possible worlds, of states, of alternatives) and L is an evaluation scale then a profile is defined as a function μ from X to L. This is an extension of the classical notion of a membership function [57], where L = [0, 1] is the range of membership functions. As it is claimed in [26], items of information can be interpreted, at least approximately, in this form. By adopting this approach, the aggregation problem finally can be modeled by suitable profile aggregation operations. The aim of the present paper is to provide an opportunity for interested readers to update and deepen their knowledge on information aggregation in intelligent systems. We remark that some of aggregation functions are used in the so called pseudo-analysis which is a generalization of the classical analysis, where instead of the field of real numbers a semiring is taken on a real interval [a, b] ⊂ [−∞, ∞] endowed with pseudo-addition ⊕ and with pseudo-multiplication ⊙, see [45] and [47], which is useful in modeling uncertainty and nonlinearity. Some applications are given in Section 5.6. To this end, the paper is organized as follows. In Section 2 we define aggregation functions and study their fundamental properties as a basis for further development. We shall use the notations from Ref. [30]. In Section 3 we identify four main classes: conjunctive, disjunctive, internal, and mixed aggregation functions. In each class we identify and characterize prototypical subclasses. In Section 4, for practical purposes, we outline two procedures to identify aggregation function that fits best to empirical data. In Section 5 we sketch some applications of information aggregation in decision making, fuzzy inference systems, multisensor data fusion, image processing, and hardware implementation of parametric operations in fuzzy logic. At the end our conclusion is drawn.

In this paper we provided a comprehensive study of information aggregation in intelligent systems. The approach is based on aggregation functions in general, and several prototypes in particular. The picture cannot be complete, due to space limitations. For instance, we could not deal with two important families such as copulas or nonadditive integrals and measures, which are now important topics for investigations related the theory and their applications in many different fields. An introduction to copulas can be found in [42]. At the beginning, copulas were mainly used in the development of the theory of probabilistic metric spaces. Later, they were of interest to define nonparametric measures of dependence between random variables, and since then, they began to play an important role in probability and mathematical statistics. The concept of a measure is fundamental in mathematics, just as the concept of integral with respect to a given measure. Classical measures are supposed to be additive. The concept of nonadditive measure does not require additivity, but it requires monotonicity related to set inclusion. The term nonadditive integral uses the concept of nonadditive measure. Introducing nonadditive measures and the corresponding nonadditive integrals, allow us to combine the inputs not only as individual (independent) inputs, but taken into account also the groups (coalitions) of inputs, see [30] and [31].