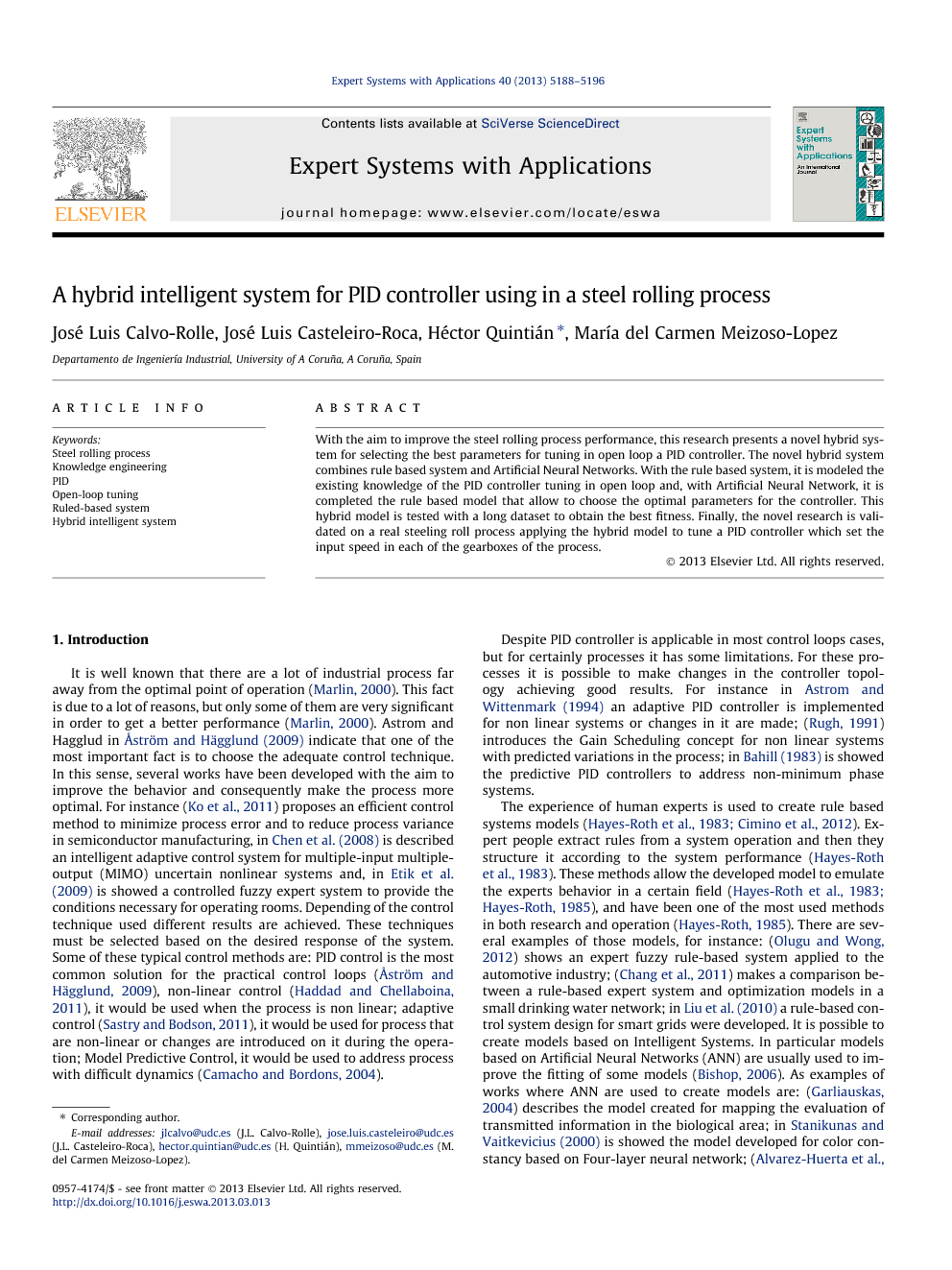 With the aim to improve the steel rolling process performance, this research presents a novel hybrid system for selecting the best parameters for tuning in open loop a PID controller. The novel hybrid system combines rule based system and Artificial Neural Networks. With the rule based system, it is modeled the existing knowledge of the PID controller tuning in open loop and, with Artificial Neural Network, it is completed the rule based model that allow to choose the optimal parameters for the controller. This hybrid model is tested with a long dataset to obtain the best fitness. Finally, the novel research is validated on a real steeling roll process applying the hybrid model to tune a PID controller which set the input speed in each of the gearboxes of the process.

It is well known that there are a lot of industrial process far away from the optimal point of operation (Marlin, 2000). This fact is due to a lot of reasons, but only some of them are very significant in order to get a better performance (Marlin, 2000). Astrom and Hagglud in Åström and Hägglund (2009) indicate that one of the most important fact is to choose the adequate control technique. In this sense, several works have been developed with the aim to improve the behavior and consequently make the process more optimal. For instance (Ko, Kim, Kim, Baek, & Kim, 2011) proposes an efficient control method to minimize process error and to reduce process variance in semiconductor manufacturing, in Chen, Lin, and Chen (2008) is described an intelligent adaptive control system for multiple-input multiple-output (MIMO) uncertain nonlinear systems and, in Etik, Allahverdi, Sert, and Saritas (2009) is showed a controlled fuzzy expert system to provide the conditions necessary for operating rooms. Depending of the control technique used different results are achieved. These techniques must be selected based on the desired response of the system. Some of these typical control methods are: PID control is the most common solution for the practical control loops (Åström & Hägglund, 2009), non-linear control (Haddad & Chellaboina, 2011), it would be used when the process is non linear; adaptive control (Sastry & Bodson, 2011), it would be used for process that are non-linear or changes are introduced on it during the operation; Model Predictive Control, it would be used to address process with difficult dynamics (Camacho & Bordons, 2004). Despite PID controller is applicable in most control loops cases, but for certainly processes it has some limitations. For these processes it is possible to make changes in the controller topology achieving good results. For instance in Astrom and Wittenmark (1994) an adaptive PID controller is implemented for non linear systems or changes in it are made; (Rugh, 1991) introduces the Gain Scheduling concept for non linear systems with predicted variations in the process; in Bahill (1983) is showed the predictive PID controllers to address non-minimum phase systems. The experience of human experts is used to create rule based systems models (Hayes-Roth et al., 1983 and Cimino et al., 2012). Expert people extract rules from a system operation and then they structure it according to the system performance (Hayes-Roth et al., 1983). These methods allow the developed model to emulate the experts behavior in a certain field (Hayes-Roth et al., 1983 and Hayes-Roth, 1985), and have been one of the most used methods in both research and operation (Hayes-Roth, 1985). There are several examples of those models, for instance: (Olugu & Wong, 2012) shows an expert fuzzy rule-based system applied to the automotive industry; (Chang, Pongsanone, & Ernest, 2011) makes a comparison between a rule-based expert system and optimization models in a small drinking water network; in Liu, Zabinsky, and Kohn (2010) a rule-based control system design for smart grids were developed. It is possible to create models based on Intelligent Systems. In particular models based on Artificial Neural Networks (ANN) are usually used to improve the fitting of some models (Bishop, 2006). As examples of works where ANN are used to create models are: (Garliauskas, 2004) describes the model created for mapping the evaluation of transmitted information in the biological area; in Stanikunas and Vaitkevicius (2000) is showed the model developed for color constancy based on Four-layer neural network; (Alvarez-Huerta, González-Miguélez, & García-Metola, 2011) shows the model developed to predict the drywell temperature of a nuclear power plant. Many are the methods and applications that combine rule-based systems and models based on (ANN). For instance (Ferreiro-Garcia, 2012) shows a model to improve the heat exchanger supervision using neural networks and rule based techniques. In Srivastava, Singh, and Sharma (1999) a knowledge-based conceptual neural network is developed for fast voltage contingency selection and ranking. Chaoui et al. (2004) proposes a control strategy based on Artificial Neural Networks for a positioning system with a flexible transmission element, with a rule-based supervisor for online adaptation of the parameters of the reference model. Usually, the control loops of steel rolling process are conventional, and the operators therefore require no ongoing training and updating. Thus, it is necessary that the improvements should aim to complement the monitoring and control applications with which the operators are fully familiar. There are several previous works which tries to get this improvements (Chen et al., 2010, Wan et al., 2008, Maheral et al., 1995 and Sbarbaro-Hofer et al., 1993). In this work a novel hybrid intelligent system for PID controller tuning in open loop is proposed. It is based on a rule based expert system combined with Artificial Neural Networks. With the proposal it is possible to tuning the PID controller with the optimal parameters according with the operation point of the steel rolling process on load. One approach, to solve the above problems, is to create a generic decision method, based on a conceptual model describing the necessary steps to be achieved in order to obtain the PID controller parameters for open-loop empirical adjustment method. The novel model presented in this study was developed based on six different sets of expressions with highly satisfactory results commonly used in control systems. The rest of the paper is organized as follows: first, the different intelligent classification method used in this study are describe in Section 2. Section 3 describes the procedure to tune a PID controller in open loop and the different expressions considered for selecting the PID parameters. Section 4 describes the novel hybrid system; its components, dataset, experiments and results are presented. Section 5 presents the empirical application of the novel hybrid system on steel rolling process. Finally the conclusions and future work are present.

The proposed method allows to obtain the optimal performance of the steel rolling process by selecting the best parameters of the PID controller. The system, based on knowledge rules and ANN, selects the most adequate expression for calculating the PID parameters in an automatic way, without the knowledge of expert operators. It makes easier to start up the process on which the developed system is applied. The model was tested on real steeling roll process with a unknown transfer function. The results obtained are presented in the Results - Findings section to fulfill the initial objectives by verifying the correct behavior of the developed system. Therefore, the Hybrid Model allows to improve the transient and permanent regimes of the process response. From a general point of view of the Hybrid Model, three useful contributions were made. Firstly, greater clarity was achieved for various stages in the adjustment of a PID design. Secondly, certain contradictions were shown up between different methods, these being solved by the use of the model. Thirdly, a method for the automatic tuning of PID to control systems in open loop has been described, allowing to get a finer grain model based on data-mining and techniques.