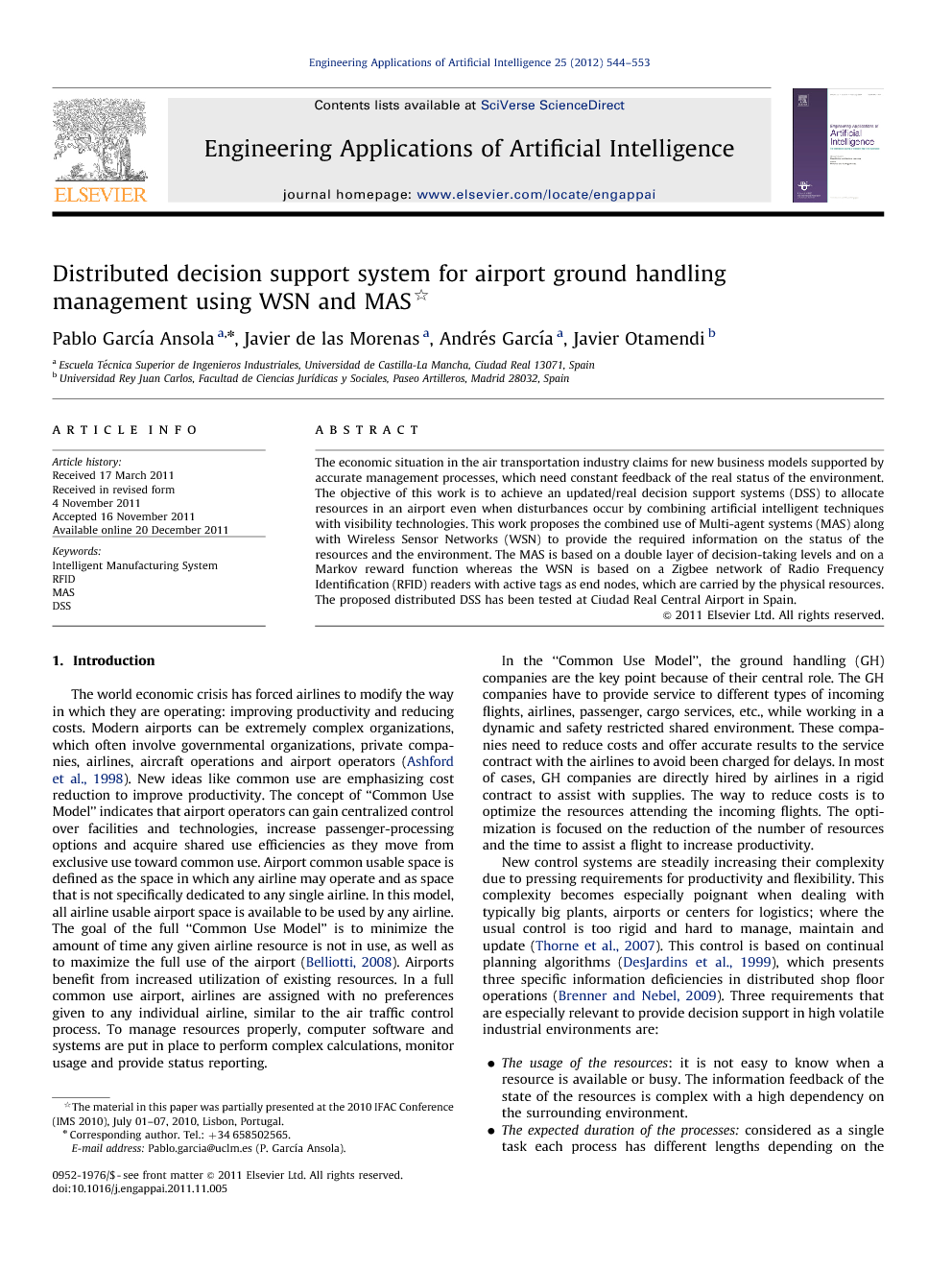 The economic situation in the air transportation industry claims for new business models supported by accurate management processes, which need constant feedback of the real status of the environment. The objective of this work is to achieve an updated/real decision support systems (DSS) to allocate resources in an airport even when disturbances occur by combining artificial intelligent techniques with visibility technologies. This work proposes the combined use of Multi-agent systems (MAS) along with Wireless Sensor Networks (WSN) to provide the required information on the status of the resources and the environment. The MAS is based on a double layer of decision-taking levels and on a Markov reward function whereas the WSN is based on a Zigbee network of Radio Frequency Identification (RFID) readers with active tags as end nodes, which are carried by the physical resources. The proposed distributed DSS has been tested at Ciudad Real Central Airport in Spain

The result of this work is the robust combination of a WSN based on RFID as identification technology and Zigbee as communication technology as well as its real implementation in an airport. The existing developed standards abstract the implementation of the low layers of the WSN, focusing the work in the deployment of software, the definition of the data model and the specification of final user requirements. The aim of the WSN is to cover big distances in the environment while performing the identification in defined zones with a flexible data model that allows adding new devices or new information online. The proposed WSN is based on a three-level architecture composed by an end node level (RFID), a router level (RFID+Zigbee) and a coordinator level (Zigbee+Database). Due to the requirements of this outdoor mobile application, an energy efficient management was necessary. This work proposes different software techniques based on power adaptability, ultra low power consumption modes and efficiency routing; getting high performance consumption ratios. Once the information is captured, agent-based technology stands up as appropriate to address complex tasks of planning operations along the supply chain. The main reasons are: its scalability, its capacity of negotiation and its ability to implement artificial intelligent techniques. More specifically, the combination of agent based and identification technologies has been considered as a proper way to manage the short-term planning required to allocate multiple resources in highly dynamic environments using a product driven approach. Complementing the DSS, a visual software tool has been developed to manage ground-handling resources that assist the incoming flight in the Ciudad Real Central Airport. The airport staff had a very positive reaction towards the application once they got familiarized with the demo version. This was mainly due to the ease of use, the simplicity and the directness in which visual information was provided.