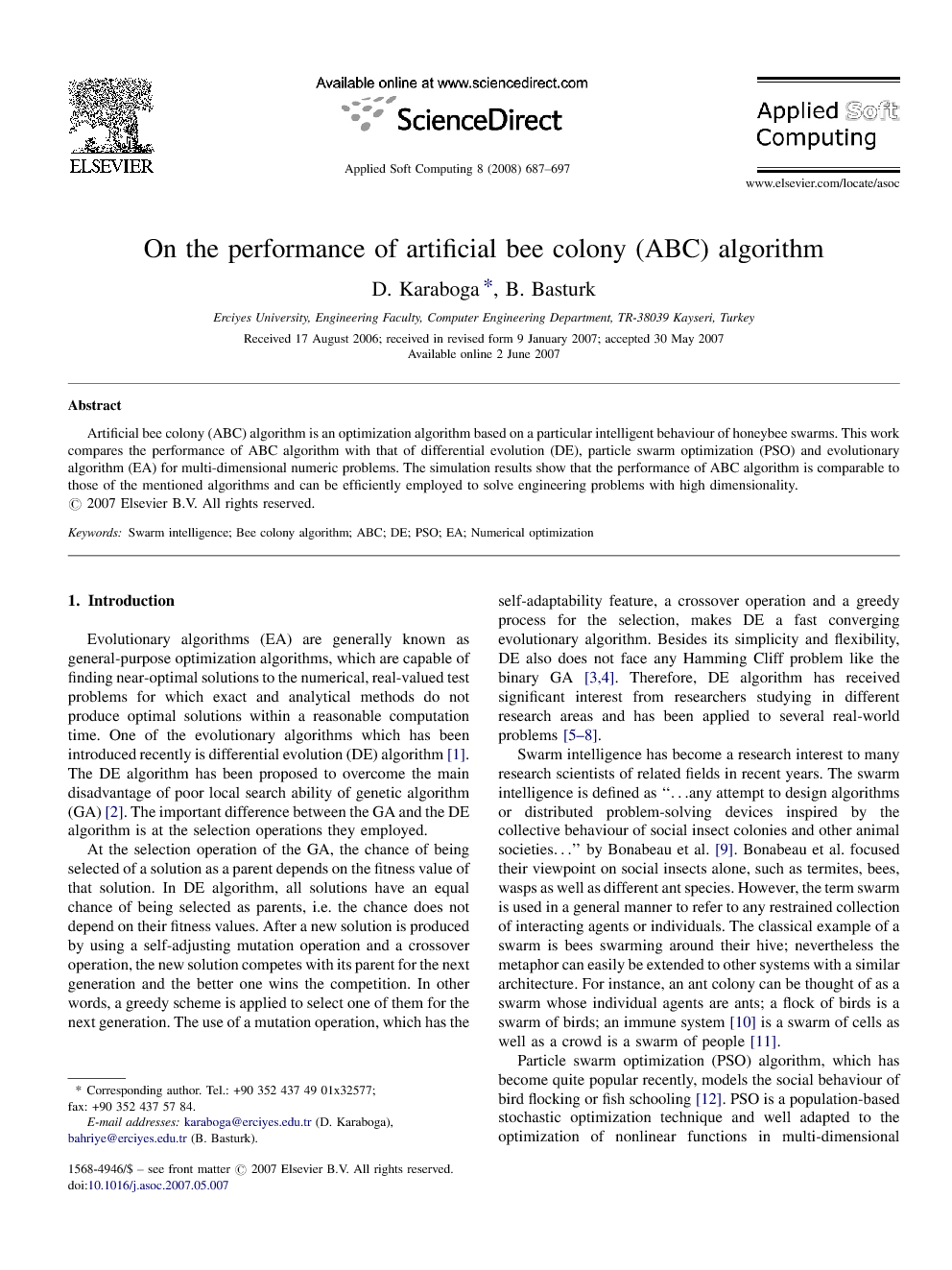 Artificial bee colony (ABC) algorithm is an optimization algorithm based on a particular intelligent behaviour of honeybee swarms. This work compares the performance of ABC algorithm with that of differential evolution (DE), particle swarm optimization (PSO) and evolutionary algorithm (EA) for multi-dimensional numeric problems. The simulation results show that the performance of ABC algorithm is comparable to those of the mentioned algorithms and can be efficiently employed to solve engineering problems with high dimensionality.

Evolutionary algorithms (EA) are generally known as general-purpose optimization algorithms, which are capable of finding near-optimal solutions to the numerical, real-valued test problems for which exact and analytical methods do not produce optimal solutions within a reasonable computation time. One of the evolutionary algorithms which has been introduced recently is differential evolution (DE) algorithm [1]. The DE algorithm has been proposed to overcome the main disadvantage of poor local search ability of genetic algorithm (GA) [2]. The important difference between the GA and the DE algorithm is at the selection operations they employed. At the selection operation of the GA, the chance of being selected of a solution as a parent depends on the fitness value of that solution. In DE algorithm, all solutions have an equal chance of being selected as parents, i.e. the chance does not depend on their fitness values. After a new solution is produced by using a self-adjusting mutation operation and a crossover operation, the new solution competes with its parent for the next generation and the better one wins the competition. In other words, a greedy scheme is applied to select one of them for the next generation. The use of a mutation operation, which has the self-adaptability feature, a crossover operation and a greedy process for the selection, makes DE a fast converging evolutionary algorithm. Besides its simplicity and flexibility, DE also does not face any Hamming Cliff problem like the binary GA [3] and [4]. Therefore, DE algorithm has received significant interest from researchers studying in different research areas and has been applied to several real-world problems [5], [6], [7] and [8]. Swarm intelligence has become a research interest to many research scientists of related fields in recent years. The swarm intelligence is defined as “…any attempt to design algorithms or distributed problem-solving devices inspired by the collective behaviour of social insect colonies and other animal societies…” by Bonabeau et al. [9]. Bonabeau et al. focused their viewpoint on social insects alone, such as termites, bees, wasps as well as different ant species. However, the term swarm is used in a general manner to refer to any restrained collection of interacting agents or individuals. The classical example of a swarm is bees swarming around their hive; nevertheless the metaphor can easily be extended to other systems with a similar architecture. For instance, an ant colony can be thought of as a swarm whose individual agents are ants; a flock of birds is a swarm of birds; an immune system [10] is a swarm of cells as well as a crowd is a swarm of people [11]. Particle swarm optimization (PSO) algorithm, which has become quite popular recently, models the social behaviour of bird flocking or fish schooling [12]. PSO is a population-based stochastic optimization technique and well adapted to the optimization of nonlinear functions in multi-dimensional space. PSO consists of a swarm of particles moving in a search space of possible solutions for a problem. Every particle has a position vector representing a candidate solution to the problem and a velocity vector. Moreover, each particle contains a small memory that stores its own best position seen so far and a global best position obtained through communication with its neighbour particles. A few models have been developed to model the intelligent behaviours of honeybee swarms and applied for solving combinatorial type problems [13], [14], [15], [16], [17], [18], [19] and [20]. There is only one numerical optimization algorithm in the literature based on intelligent behaviour of honeybee swarms [21]. Yang developed a virtual bee algorithm (VBA) [21] to solve the numerical optimization problems. VBA has been introduced to optimize only the functions with two parameters. In VBA, a swarm of virtual bees are generated and started to move randomly in the phase space. These bees interact when they find some target nectar corresponding to the encoded values of the function. The solution for the optimization problem can be obtained from the intensity of bee interactions. For optimizing multivariable numerical functions, Karaboga has described a bee swarm algorithm called artificial bee colony (ABC) algorithm [22], which is different from the virtual bee algorithm, and Basturk and Karaboga compared the performance of ABC algorithm with the performance of GA in [23]. This work compares the performance of ABC algorithm with that of DE and PSO algorithms, and EA for a set of well-known test functions. Also, the performance of ABC is analysed under the change of control parameter values. In Section 2, the behaviour of real honeybees is described and then the artificial bee colony algorithm is introduced in Section 3. In Section 4, the experimental study is described and finally, the simulation results obtained are presented and discussed in Section 5.

In the present investigation, the performance of the ABC algorithm has been compared with that of differential evolution, particle swarm optimization and evolutionary algorithm for multi-dimensional and multimodal numeric problems. The behaviour of ABC algorithm under different control parameter values has also been analysed. Simulation results show that ABC algorithm performs better than the mentioned algorithms and can be efficiently employed to solve the multimodal engineering problems with high dimensionality.