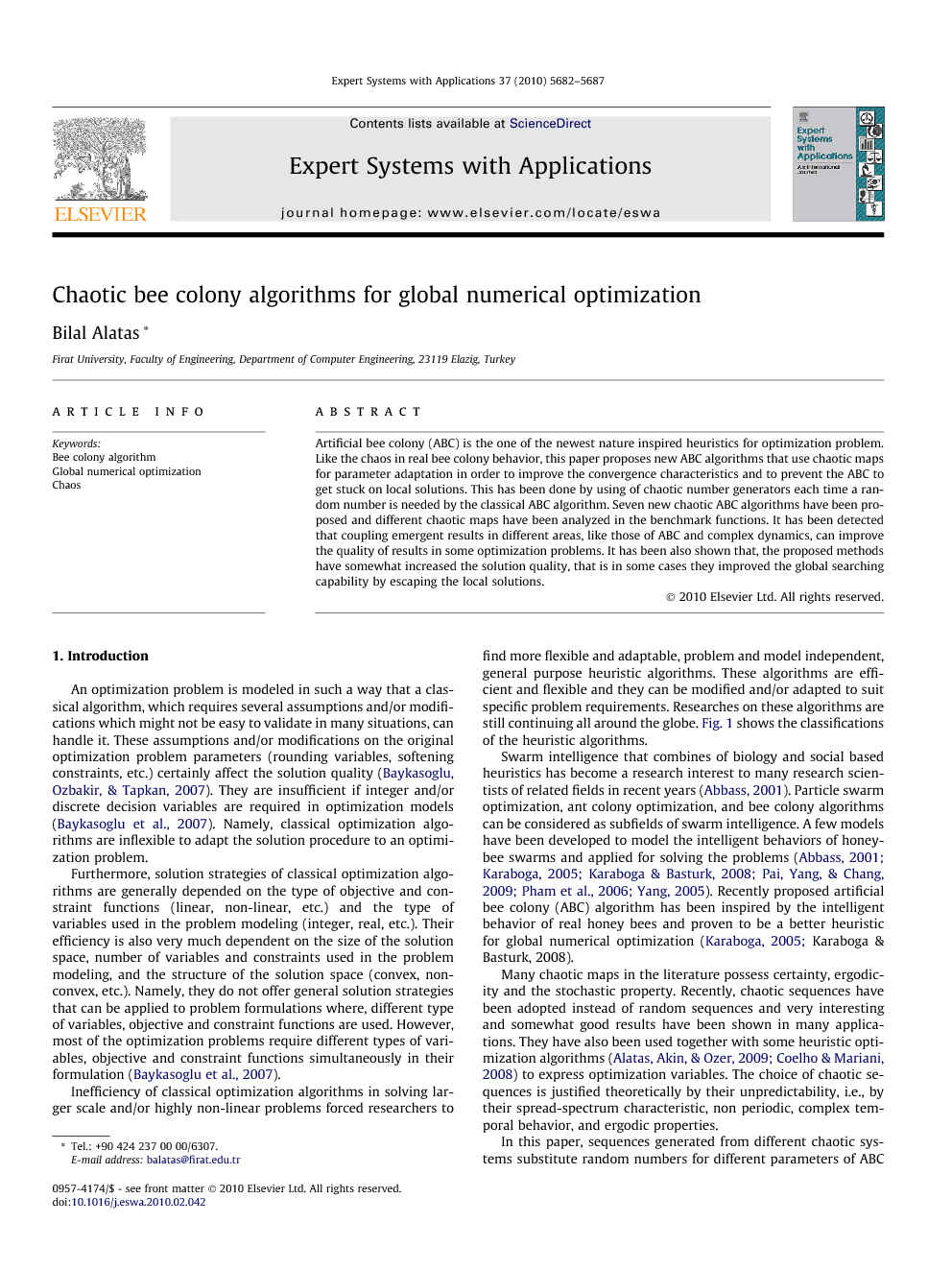 Artificial bee colony (ABC) is the one of the newest nature inspired heuristics for optimization problem. Like the chaos in real bee colony behavior, this paper proposes new ABC algorithms that use chaotic maps for parameter adaptation in order to improve the convergence characteristics and to prevent the ABC to get stuck on local solutions. This has been done by using of chaotic number generators each time a random number is needed by the classical ABC algorithm. Seven new chaotic ABC algorithms have been proposed and different chaotic maps have been analyzed in the benchmark functions. It has been detected that coupling emergent results in different areas, like those of ABC and complex dynamics, can improve the quality of results in some optimization problems. It has been also shown that, the proposed methods have somewhat increased the solution quality, that is in some cases they improved the global searching capability by escaping the local solutions.

An optimization problem is modeled in such a way that a classical algorithm, which requires several assumptions and/or modifications which might not be easy to validate in many situations, can handle it. These assumptions and/or modifications on the original optimization problem parameters (rounding variables, softening constraints, etc.) certainly affect the solution quality (Baykasoglu, Ozbakir, & Tapkan, 2007). They are insufficient if integer and/or discrete decision variables are required in optimization models (Baykasoglu et al., 2007). Namely, classical optimization algorithms are inflexible to adapt the solution procedure to an optimization problem. Furthermore, solution strategies of classical optimization algorithms are generally depended on the type of objective and constraint functions (linear, non-linear, etc.) and the type of variables used in the problem modeling (integer, real, etc.). Their efficiency is also very much dependent on the size of the solution space, number of variables and constraints used in the problem modeling, and the structure of the solution space (convex, non-convex, etc.). Namely, they do not offer general solution strategies that can be applied to problem formulations where, different type of variables, objective and constraint functions are used. However, most of the optimization problems require different types of variables, objective and constraint functions simultaneously in their formulation (Baykasoglu et al., 2007). Inefficiency of classical optimization algorithms in solving larger scale and/or highly non-linear problems forced researchers to find more flexible and adaptable, problem and model independent, general purpose heuristic algorithms. These algorithms are efficient and flexible and they can be modified and/or adapted to suit specific problem requirements. Researches on these algorithms are still continuing all around the globe. Fig. 1 shows the classifications of the heuristic algorithms.Swarm intelligence that combines of biology and social based heuristics has become a research interest to many research scientists of related fields in recent years (Abbass, 2001). Particle swarm optimization, ant colony optimization, and bee colony algorithms can be considered as subfields of swarm intelligence. A few models have been developed to model the intelligent behaviors of honeybee swarms and applied for solving the problems (Abbass, 2001, Karaboga, 2005, Karaboga and Basturk, 2008, Pai et al., 2009, Pham et al., 2006 and Yang et al., 2005). Recently proposed artificial bee colony (ABC) algorithm has been inspired by the intelligent behavior of real honey bees and proven to be a better heuristic for global numerical optimization (Karaboga, 2005 and Karaboga and Basturk, 2008). Many chaotic maps in the literature possess certainty, ergodicity and the stochastic property. Recently, chaotic sequences have been adopted instead of random sequences and very interesting and somewhat good results have been shown in many applications. They have also been used together with some heuristic optimization algorithms (Alatas et al., 2009 and Coelho and Mariani, 2008) to express optimization variables. The choice of chaotic sequences is justified theoretically by their unpredictability, i.e., by their spread-spectrum characteristic, non periodic, complex temporal behavior, and ergodic properties. In this paper, sequences generated from different chaotic systems substitute random numbers for different parameters of ABC where it is necessary to make a random-based choice. For this purpose, different ABC methods that use chaotic maps as efficient alternatives to pseudorandom sequences have been proposed. By this way, it is intended to enhance the global convergence and to prevent to stick on a local solution. However, in general, it is hard to estimate how good most chaotic random number generator by applying statistical tests are, as they do not follow the uniform distribution. The simulation results show that the application of deterministic chaotic signals instead of random sequences may be a possible strategy to improve the performances of ABC. The remaining of this paper is organized as follows. Review of ABC is summarized in Section 2. Section 3 describes the proposed methods, Chaotic bee colony algorithms, shortly CBCAs. Section 4 describes the benchmark problems used for comparisons of the proposed methods. In Section 5, the testing of the proposed methods through benchmark problems are carried out and the simulation results are compared. Finally, the conclusions are drawn based on the comparison analysis reported and presented in Section 6.

In this paper different chaotic maps have been embedded to adapt the parameters of ABC algorithm. This has been done by using of chaotic number generators. Two new chaotic ABC algorithms have been proposed and seven chaotic maps have been analyzed in the benchmark functions. It has been detected that coupling emergent results in different areas, like those of ABC and complex dynamics, can improve the quality of results in some optimization problems and also that chaos may be a desired process as in real honey bee colony. It has been also shown that, these methods have somewhat increased the solution quality, that is in some cases they improved the global searching capability by escaping the local solutions. These proposed methods are new and more elaborated experiments may be performed with parallel or distributed implementation