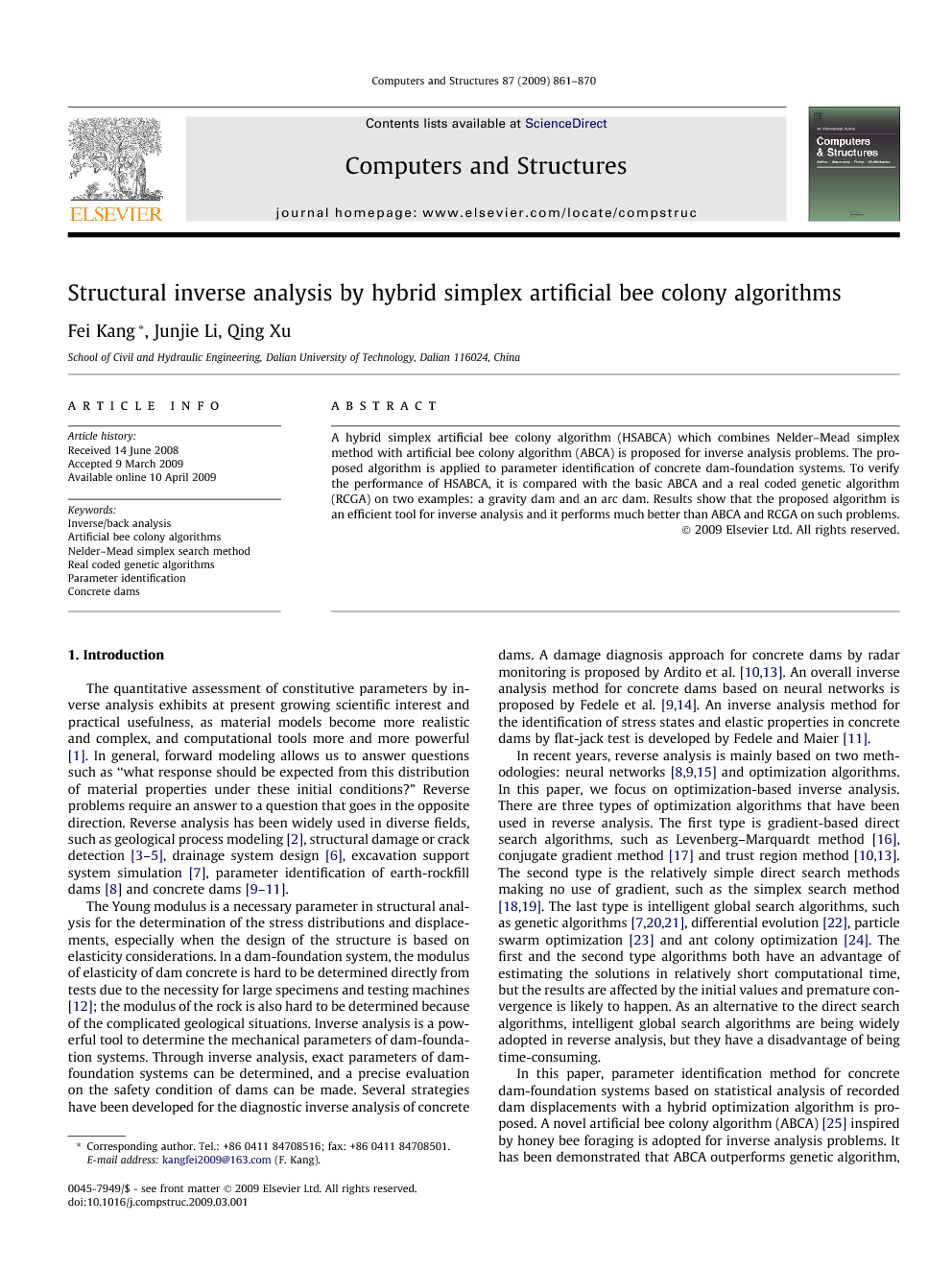 A hybrid simplex artificial bee colony algorithm (HSABCA) which combines Nelder–Mead simplex method with artificial bee colony algorithm (ABCA) is proposed for inverse analysis problems. The proposed algorithm is applied to parameter identification of concrete dam-foundation systems. To verify the performance of HSABCA, it is compared with the basic ABCA and a real coded genetic algorithm (RCGA) on two examples: a gravity dam and an arc dam. Results show that the proposed algorithm is an efficient tool for inverse analysis and it performs much better than ABCA and RCGA on such problems.

The quantitative assessment of constitutive parameters by inverse analysis exhibits at present growing scientific interest and practical usefulness, as material models become more realistic and complex, and computational tools more and more powerful [1]. In general, forward modeling allows us to answer questions such as “what response should be expected from this distribution of material properties under these initial conditions?” Reverse problems require an answer to a question that goes in the opposite direction. Reverse analysis has been widely used in diverse fields, such as geological process modeling [2], structural damage or crack detection [3], [4] and [5], drainage system design [6], excavation support system simulation [7], parameter identification of earth-rockfill dams [8] and concrete dams [9], [10] and [11]. The Young modulus is a necessary parameter in structural analysis for the determination of the stress distributions and displacements, especially when the design of the structure is based on elasticity considerations. In a dam-foundation system, the modulus of elasticity of dam concrete is hard to be determined directly from tests due to the necessity for large specimens and testing machines [12]; the modulus of the rock is also hard to be determined because of the complicated geological situations. Inverse analysis is a powerful tool to determine the mechanical parameters of dam-foundation systems. Through inverse analysis, exact parameters of dam-foundation systems can be determined, and a precise evaluation on the safety condition of dams can be made. Several strategies have been developed for the diagnostic inverse analysis of concrete dams. A damage diagnosis approach for concrete dams by radar monitoring is proposed by Ardito et al. [10] and [13]. An overall inverse analysis method for concrete dams based on neural networks is proposed by Fedele et al. [9] and [14]. An inverse analysis method for the identification of stress states and elastic properties in concrete dams by flat-jack test is developed by Fedele and Maier [11]. In recent years, reverse analysis is mainly based on two methodologies: neural networks [8], [9] and [15] and optimization algorithms. In this paper, we focus on optimization-based inverse analysis. There are three types of optimization algorithms that have been used in reverse analysis. The first type is gradient-based direct search algorithms, such as Levenberg–Marquardt method [16], conjugate gradient method [17] and trust region method [10] and [13]. The second type is the relatively simple direct search methods making no use of gradient, such as the simplex search method [18] and [19]. The last type is intelligent global search algorithms, such as genetic algorithms [7], [20] and [21], differential evolution [22], particle swarm optimization [23] and ant colony optimization [24]. The first and the second type algorithms both have an advantage of estimating the solutions in relatively short computational time, but the results are affected by the initial values and premature convergence is likely to happen. As an alternative to the direct search algorithms, intelligent global search algorithms are being widely adopted in reverse analysis, but they have a disadvantage of being time-consuming. In this paper, parameter identification method for concrete dam-foundation systems based on statistical analysis of recorded dam displacements with a hybrid optimization algorithm is proposed. A novel artificial bee colony algorithm (ABCA) [25] inspired by honey bee foraging is adopted for inverse analysis problems. It has been demonstrated that ABCA outperforms genetic algorithm, particle swarm optimization in multivariable function optimization [26] and [27]. In order to combine the advantages of direct search methods with intelligent global optimization algorithms, a hybrid simplex artificial bee colony algorithm (HSABCA) which combines ABCA with Nelder–Mead simplex search method (NMSS) [28], [29] and [30] is proposed for inverse problems. The proposed algorithm is applied to inverse analysis of a concrete gravity dam and a concrete arc dam. In the examples, pseudo-experimental data are adopted to inverse analysis. The pseudo-experimental displacements are obtained through forward finite element analysis by setting water level and material parameters to certain values. That means no experimentally recorded dam displacements are used in the study. The result obtained by HSABCA is also compared with NMSS, ABCA and a real coded genetic algorithm (RCGA). This paper is organized as follows. Section 2 presents the theory of inverse analysis for concrete dams. Section 3 introduces ABCA. Section 4 introduces NMSS, and then HSABCA is developed. Section 5 shows the performance of NMSS, RCGA, ABCA and HSABCA on inverse analysis problems of concrete dams. Finally, conclusions are given in Section 6.

A derivative-free algorithm HSABCA which combines a Nelder–Mead simplex search method and an artificial bee colony algorithm for structural inverse analysis is proposed. The new algorithm combines the local search ability of NMSS and the global search ability of ABCA. In order to verify the feasibility and the performance of the proposed algorithm, inverse analysis is carried out for identifying the Young modulus of concrete dam-foundation systems. Two examples are investigated to compare the overall search ability of HSABCA with NMSS, ABCA and RCGA. From the results it can be found that both ABCA and RCGA cannot solve the two problems very well. When the number of parameters in the problem increases, ABCA performs better than RCGA. HSABCA performs better than the other two stochastic algorithms in both numerical examples because it needs less time to get the same accuracy and higher accuracy generally can be searched. Though the convergence speed of HSABCA is not as quick as NMSS, it is more robust than NMSS because the search ability of NMSS is affected by the initial simplex seriously in the second example. Consequently, it can be concluded that HSABCA has been successfully verified as an effective method for inverse analysis of dam-foundation systems. HSABCA cannot only deal with structural inverse problems with less than or equal to four variables. It also has the potential to deal with problems with more than four variables because of the global search ability which is derived from ABCA.