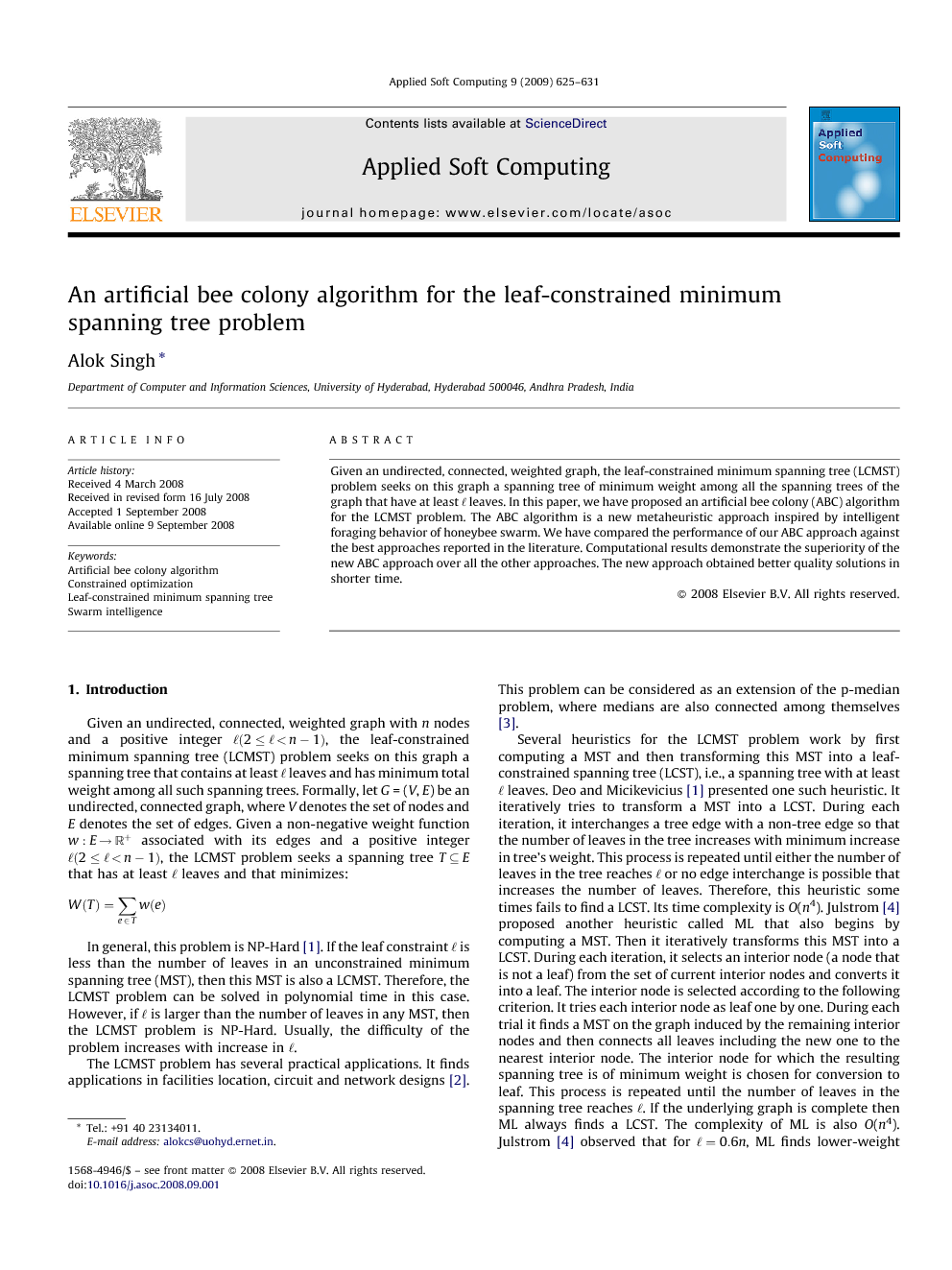 Given an undirected, connected, weighted graph, the leaf-constrained minimum spanning tree (LCMST) problem seeks on this graph a spanning tree of minimum weight among all the spanning trees of the graph that have at least ℓℓ leaves. In this paper, we have proposed an artificial bee colony (ABC) algorithm for the LCMST problem. The ABC algorithm is a new metaheuristic approach inspired by intelligent foraging behavior of honeybee swarm. We have compared the performance of our ABC approach against the best approaches reported in the literature. Computational results demonstrate the superiority of the new ABC approach over all the other approaches. The new approach obtained better quality solutions in shorter time.

In this paper we have designed and implemented an artificial bee colony algorithm ABC-LCMST for the LCMST problem. We have compared our approach against three other metaheuristic approaches—a genetic algorithm, an ant-colony optimization approach and a tabu search approach. Our approach outperformed all the other approaches. Best as well as average solution qualities of ABC-LCMST are always as good as or better than those obtained with other approaches except in one case, where average solution quality of tabu search is better. Computational times for ABC-LCMST are also quite small. In particular, ABC-LCMST completely outperforms ACO-LCMST both in terms of solution quality as well as running time. This is especially important as both approaches are based on swarm intelligence. To our knowledge this is the first application of artificial bee colony algorithm for a discrete optimization problem. This paper demonstrates the capability of artificial bee colony algorithm in solving a discrete optimization problem. Ideas presented in this paper can be applied to many other problems also. The concept of collisions introduced here keeps a check on the number of duplicate solutions in the population. Like other population-based approaches, the presence of duplicate solutions can impair the performance of ABC algorithm also. The procedure that we have developed for determining the neighboring solutions can be adapted to other subset selection problems such as 0/1 knapsack problem, quadratic knapsack problem, minimum k-cardinality tree problem, minimum vertex cover problem, etc.