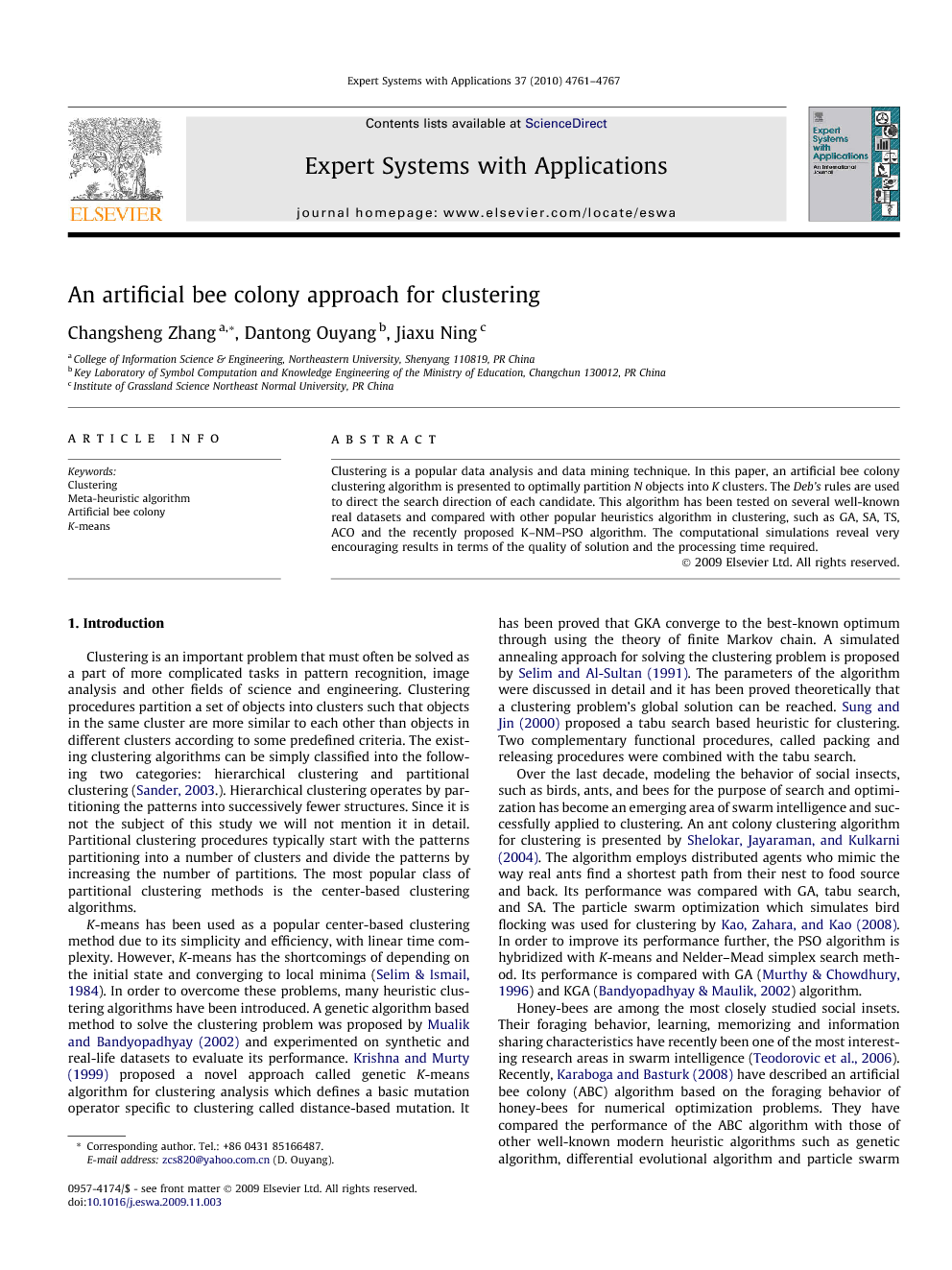 Clustering is a popular data analysis and data mining technique. In this paper, an artificial bee colony clustering algorithm is presented to optimally partition N objects into K clusters. The Deb’s rules are used to direct the search direction of each candidate. This algorithm has been tested on several well-known real datasets and compared with other popular heuristics algorithm in clustering, such as GA, SA, TS, ACO and the recently proposed K–NM–PSO algorithm. The computational simulations reveal very encouraging results in terms of the quality of solution and the processing time required.

Clustering is an important problem that must often be solved as a part of more complicated tasks in pattern recognition, image analysis and other fields of science and engineering. Clustering procedures partition a set of objects into clusters such that objects in the same cluster are more similar to each other than objects in different clusters according to some predefined criteria. The existing clustering algorithms can be simply classified into the following two categories: hierarchical clustering and partitional clustering (Sander, 2003.). Hierarchical clustering operates by partitioning the patterns into successively fewer structures. Since it is not the subject of this study we will not mention it in detail. Partitional clustering procedures typically start with the patterns partitioning into a number of clusters and divide the patterns by increasing the number of partitions. The most popular class of partitional clustering methods is the center-based clustering algorithms. K-means has been used as a popular center-based clustering method due to its simplicity and efficiency, with linear time complexity. However, K-means has the shortcomings of depending on the initial state and converging to local minima (Selim & Ismail, 1984). In order to overcome these problems, many heuristic clustering algorithms have been introduced. A genetic algorithm based method to solve the clustering problem was proposed by Mualik and Bandyopadhyay (2002) and experimented on synthetic and real-life datasets to evaluate its performance. Krishna and Murty (1999) proposed a novel approach called genetic K-means algorithm for clustering analysis which defines a basic mutation operator specific to clustering called distance-based mutation. It has been proved that GKA converge to the best-known optimum through using the theory of finite Markov chain. A simulated annealing approach for solving the clustering problem is proposed by Selim and Al-Sultan (1991). The parameters of the algorithm were discussed in detail and it has been proved theoretically that a clustering problem’s global solution can be reached. Sung and Jin (2000) proposed a tabu search based heuristic for clustering. Two complementary functional procedures, called packing and releasing procedures were combined with the tabu search. Over the last decade, modeling the behavior of social insects, such as birds, ants, and bees for the purpose of search and optimization has become an emerging area of swarm intelligence and successfully applied to clustering. An ant colony clustering algorithm for clustering is presented by Shelokar, Jayaraman, and Kulkarni (2004). The algorithm employs distributed agents who mimic the way real ants find a shortest path from their nest to food source and back. Its performance was compared with GA, tabu search, and SA. The particle swarm optimization which simulates bird flocking was used for clustering by Kao, Zahara, and Kao (2008). In order to improve its performance further, the PSO algorithm is hybridized with K-means and Nelder–Mead simplex search method. Its performance is compared with GA (Murthy & Chowdhury, 1996) and KGA (Bandyopadhyay & Maulik, 2002) algorithm. Honey-bees are among the most closely studied social insets. Their foraging behavior, learning, memorizing and information sharing characteristics have recently been one of the most interesting research areas in swarm intelligence (Teodorovic & Lucic, 2006). Recently, Karaboga and Basturk (2008) have described an artificial bee colony (ABC) algorithm based on the foraging behavior of honey-bees for numerical optimization problems. They have compared the performance of the ABC algorithm with those of other well-known modern heuristic algorithms such as genetic algorithm, differential evolutional algorithm and particle swarm optimization algorithm for unconstrained optimization problems. In this work, ABC algorithm is extended for solving clustering problems. The performance of the algorithm has been tested on a variety of data sets provided from several real-life situations and compared with several other proposed clustering algorithms. This paper is organized as follows. In Section 2, we discussed the clustering analysis problems. The ABC algorithm and the ABC algorithm adapted for solving clustering problems are introduced in Section 3. Section 4 will present experimental studies that show that our method outperforms some other methods. Finally, Section 5 summarizes the contribution of this paper along with some future research directions.

Modeling the behavior of social insects, such as ants, birds or bees, for the purpose of search and problem solving has been the emerging area of swarm intelligence. Honey-bees are among the most closely studied social insects. In this paper, an artificial bee colony algorithm is developed to solve clustering problems which is inspired by the bees’ forage behavior. The ABC algorithm for data clustering can be applied when the number of clusters known a priori and are crisp in nature. To evaluate the performance of this algorithm, it is compared with other stochastic algorithms viz. ant colony, genetic algorithm, simulated annealing, tabu search and the hybrid K–NM–PSO algorithm. This algorithm was implemented and tested on several real datasets. The Preliminary computational experience is very encouraging in terms of the quality of solution found, the average number of function evaluation and the processing time required. There are a number of research directions that can be considered as useful extensions of this research. We can combine it with some local search strategy or hybrid it with other meta-heuristic algorithms properly. Furthermore, applying the proposed algorithm to solve other optimization problems is also possible in further research