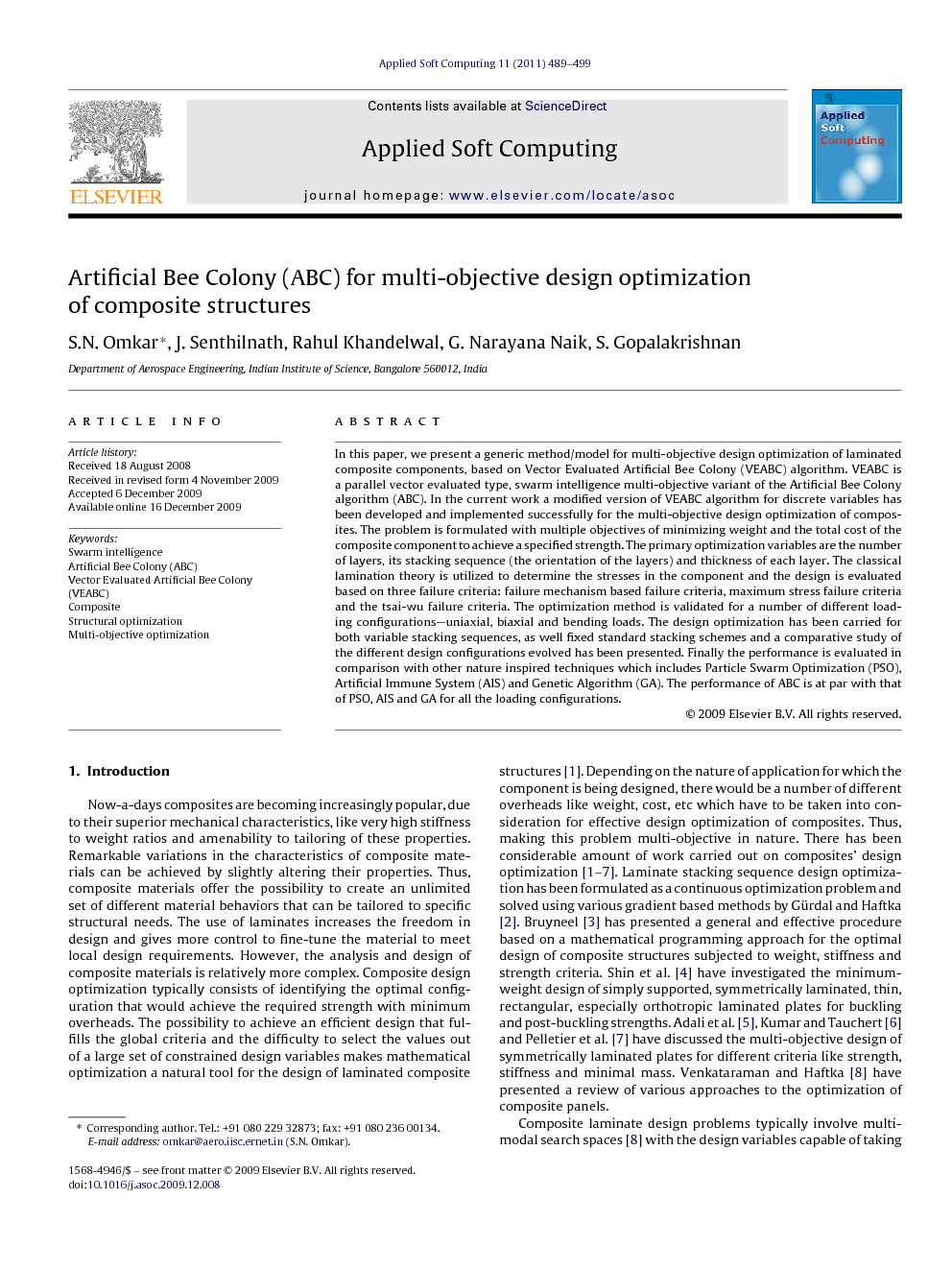 In this paper, we present a generic method/model for multi-objective design optimization of laminated composite components, based on Vector Evaluated Artificial Bee Colony (VEABC) algorithm. VEABC is a parallel vector evaluated type, swarm intelligence multi-objective variant of the Artificial Bee Colony algorithm (ABC). In the current work a modified version of VEABC algorithm for discrete variables has been developed and implemented successfully for the multi-objective design optimization of composites. The problem is formulated with multiple objectives of minimizing weight and the total cost of the composite component to achieve a specified strength. The primary optimization variables are the number of layers, its stacking sequence (the orientation of the layers) and thickness of each layer. The classical lamination theory is utilized to determine the stresses in the component and the design is evaluated based on three failure criteria: failure mechanism based failure criteria, maximum stress failure criteria and the tsai-wu failure criteria. The optimization method is validated for a number of different loading configurations—uniaxial, biaxial and bending loads. The design optimization has been carried for both variable stacking sequences, as well fixed standard stacking schemes and a comparative study of the different design configurations evolved has been presented. Finally the performance is evaluated in comparison with other nature inspired techniques which includes Particle Swarm Optimization (PSO), Artificial Immune System (AIS) and Genetic Algorithm (GA). The performance of ABC is at par with that of PSO, AIS and GA for all the loading configurations.

In this paper, we present a generic model for composite design optimization based on VEABC. In the current work, based on the ABC algorithm a new version of VEABC algorithm for discrete variables has been developed and implemented successfully for the multi-objective design optimization of composites. The composite design optimization problem has been formulated as multi-objective optimization problem with objectives of minimizing weight of the component for a required strength and minimizing the total cost incurred. The number of layers, layer thicknesses and the stacking sequence—have been considered as the design variables for design optimization. The composite design is evaluated based on several failure criteria such as Maximum stress, Tsai-Wu and Failure mechanism based failure criteria. The proposed optimization model has been validated for a number of different in-plane loading configurations from different regions of the failure envelope. Also, a comparison has been brought out between configuration evolved, with the stacking schemes fixed and the stacking scheme being treated as a variable of the optimization process. These comparisons bring out the significant weight savings obtained by treating the stacking sequence also as a design variable instead of fixing it any of the commonly used standard stacking schemes like {0/90}S and {0/±45/90}S. It can be seen from the results that, in all the considered cases the VEABC based optimization model has performed quite satisfactorily in comparison with other nature inspired techniques, evolving superior composite design that results in significant weight savings. This comprehensively ascertains the robustness of the proposed method. Further, this approach does not impose any limitation on the number of objectives and constraints. The VEABC based optimization model developed in this paper allows for easy incorporation of any changes in design parameters. Inclusion of further constraints and objectives can be effected without necessitating any major changes to current framework, making this VEABC based optimization model robust and generic, providing great deal of flexibility to extend it to any number of different composite configurations.