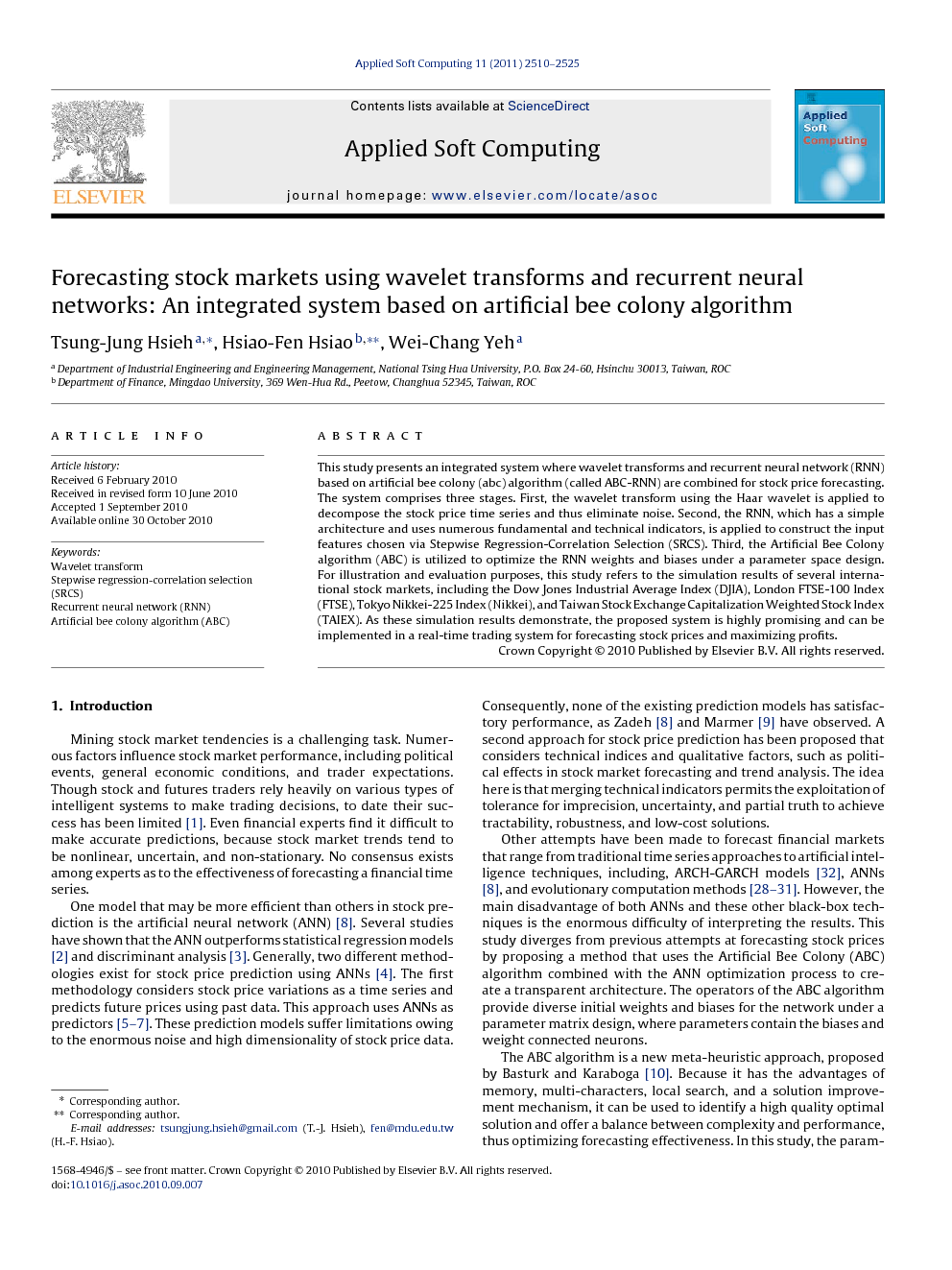 This study presents an integrated system where wavelet transforms and recurrent neural network (RNN) based on artificial bee colony (abc) algorithm (called ABC-RNN) are combined for stock price forecasting. The system comprises three stages. First, the wavelet transform using the Haar wavelet is applied to decompose the stock price time series and thus eliminate noise. Second, the RNN, which has a simple architecture and uses numerous fundamental and technical indicators, is applied to construct the input features chosen via Stepwise Regression-Correlation Selection (SRCS). Third, the Artificial Bee Colony algorithm (ABC) is utilized to optimize the RNN weights and biases under a parameter space design. For illustration and evaluation purposes, this study refers to the simulation results of several international stock markets, including the Dow Jones Industrial Average Index (DJIA), London FTSE-100 Index (FTSE), Tokyo Nikkei-225 Index (Nikkei), and Taiwan Stock Exchange Capitalization Weighted Stock Index (TAIEX). As these simulation results demonstrate, the proposed system is highly promising and can be implemented in a real-time trading system for forecasting stock prices and maximizing profits.

Mining stock market tendencies is a challenging task. Numerous factors influence stock market performance, including political events, general economic conditions, and trader expectations. Though stock and futures traders rely heavily on various types of intelligent systems to make trading decisions, to date their success has been limited [1]. Even financial experts find it difficult to make accurate predictions, because stock market trends tend to be nonlinear, uncertain, and non-stationary. No consensus exists among experts as to the effectiveness of forecasting a financial time series. One model that may be more efficient than others in stock prediction is the artificial neural network (ANN) [8]. Several studies have shown that the ANN outperforms statistical regression models [2] and discriminant analysis [3]. Generally, two different methodologies exist for stock price prediction using ANNs [4]. The first methodology considers stock price variations as a time series and predicts future prices using past data. This approach uses ANNs as predictors [5], [6] and [7]. These prediction models suffer limitations owing to the enormous noise and high dimensionality of stock price data. Consequently, none of the existing prediction models has satisfactory performance, as Zadeh [8] and Marmer [9] have observed. A second approach for stock price prediction has been proposed that considers technical indices and qualitative factors, such as political effects in stock market forecasting and trend analysis. The idea here is that merging technical indicators permits the exploitation of tolerance for imprecision, uncertainty, and partial truth to achieve tractability, robustness, and low-cost solutions. Other attempts have been made to forecast financial markets that range from traditional time series approaches to artificial intelligence techniques, including, ARCH-GARCH models [32], ANNs [8], and evolutionary computation methods [28], [29], [30] and [31]. However, the main disadvantage of both ANNs and these other black-box techniques is the enormous difficulty of interpreting the results. This study diverges from previous attempts at forecasting stock prices by proposing a method that uses the Artificial Bee Colony (ABC) algorithm combined with the ANN optimization process to create a transparent architecture. The operators of the ABC algorithm provide diverse initial weights and biases for the network under a parameter matrix design, where parameters contain the biases and weight connected neurons. The ABC algorithm is a new meta-heuristic approach, proposed by Basturk and Karaboga [10]. Because it has the advantages of memory, multi-characters, local search, and a solution improvement mechanism, it can be used to identify a high quality optimal solution and offer a balance between complexity and performance, thus optimizing forecasting effectiveness. In this study, the parameter matrix is optimized via the powerful heuristic method, the ABC algorithm. First, however, wavelet analysis is applied. Wavelet analysis is a relatively new field in signal processing [11]. Wavelets are mathematical functions that decompose data into different frequency components, after which each component is studied with a resolution matched to its scale, where a scale denotes a time horizon [12]. Wavelet filtering is closely related to the volatile and time-varying characteristics of the real-world time series and is not limited by the stationarity assumption [13]. The wavelet transform decomposes a process into different scales, making it useful in distinguishing seasonality, revealing structural breaks and volatility clusters, and identifying local and global dynamic properties of a process at specific timescales [14]. Wavelet analysis has been shown to be particularly useful in analyzing, modeling, and predicting the behavior of financial instruments as diverse as stocks and exchange rates [15] and [16]. This study applies wavelet transform using the Haar wavelet to decompose the time series. Numerous practical problems involve a possible quite large number of input variables that can be quite large. Moreover, these input variables may contain considerable redundancy. Because of this redundancy, eliminating redundant variables may improve prediction performance. Besides, the interpretability of the predictive model can be enhanced by reducing the data dimensionality [17]. Consequently, this study employs Stepwise Regression-Correlation Selection (SRCS) to choose the input features that most strongly influence the response variable. The framework combines several statistical methods and soft computing techniques such as RNN, wavelet transform, ABC algorithm, and SRCS to extract the input feature subset. Besides applying wavelet-based data representation, SRCS to data processing before generating the RNN, and the parameter matrix was optimized via a powerful heuristic method—Artificial Bee Colony algorithm. We tested our method on the Taiwan Stock Exchange Capitalization Weighted Stock Index (TAIEX) for the period 1997–2003, and found that it was more predictable than other methods. To ensure our work was sufficiently robust and workable, we conducted simulation studies on other international stock markets, including the Dow Jones Industrial Average Index (DJIA), London FTSE-100 Index (FTSE), and Tokyo Nikkei-225 Index (Nikkei), for two periods: 1997–2003 and 2002–2008. The results indicate that the proposed integrated system is viable and useful, and it may also result in large profits. The remainder of this paper is organized as follows: Section 2 describes the stock price prediction approach used in this study. Section 3 presents the results and compares the proposed method to previous approaches. Section 4 summarizes the findings and provides suggestions for further research.

This paper proposes an integrated system, ABC-RNN, for stock price prediction, and one that combines several statistical methods and soft computing techniques. The system involves three stages: (1) data preprocessing using the Wavelet Transform (WT), which is applied to decompose the stock price time series to eliminate noise; (2) application of the Recurrent Neural Network (RNN), which has a simpler architecture than the traditional ANN and uses fundamental and technical indicators to construct the input features chosen via Stepwise Regression-Correlation Selection (SRCS); and (3) the use of the Artificial Bee Colony Algorithm (ABC) to optimize the RNN weights and biases under a parameter space design. The proposed approach is compared to other methods presented in the literature [27], [28], [29] and [30] for stock price prediction. Simulation results show that the proposed model with wavelet-based preprocessing greatly outperforms the other methods in TAIEX. For creating further comparative benchmark problems and to show that the ABC-RNN is sufficiently robust, we have also applied our approach to other stock markets, including the Dow Jones Industrial Average Index (DJIA), London FTSE-100 Index (FTSE), and Tokyo Nikkei-225 Index (Nikkei), and we extend the predicted period from 2002 to 2008. The results for the criteria RMSE, MAE and MAPE show that the ABC-RNN model is also applicable to the DIJA, Nikkei and FTSE without respect to the training set proportions (50% or 83%) or the predicted periods (1997–2003 or 2002–2008). Although the proposed integrated system has a satisfactory predictive performance, it still has some insufficiencies, which means the system might be enhanced. For example, it would be better to simplify the system organization, possibly by finding a scheme that includes functions of feature selection and an information supply of addictive parameters. Therefore, in the future, a different intelligent integrated method, such as a nonlinear model using SVMs as a consequence, might be applied to a more complex time series problem. In addition, a more advanced pattern selection scheme might be embedded in the system to retrieve significant patterns from the data.