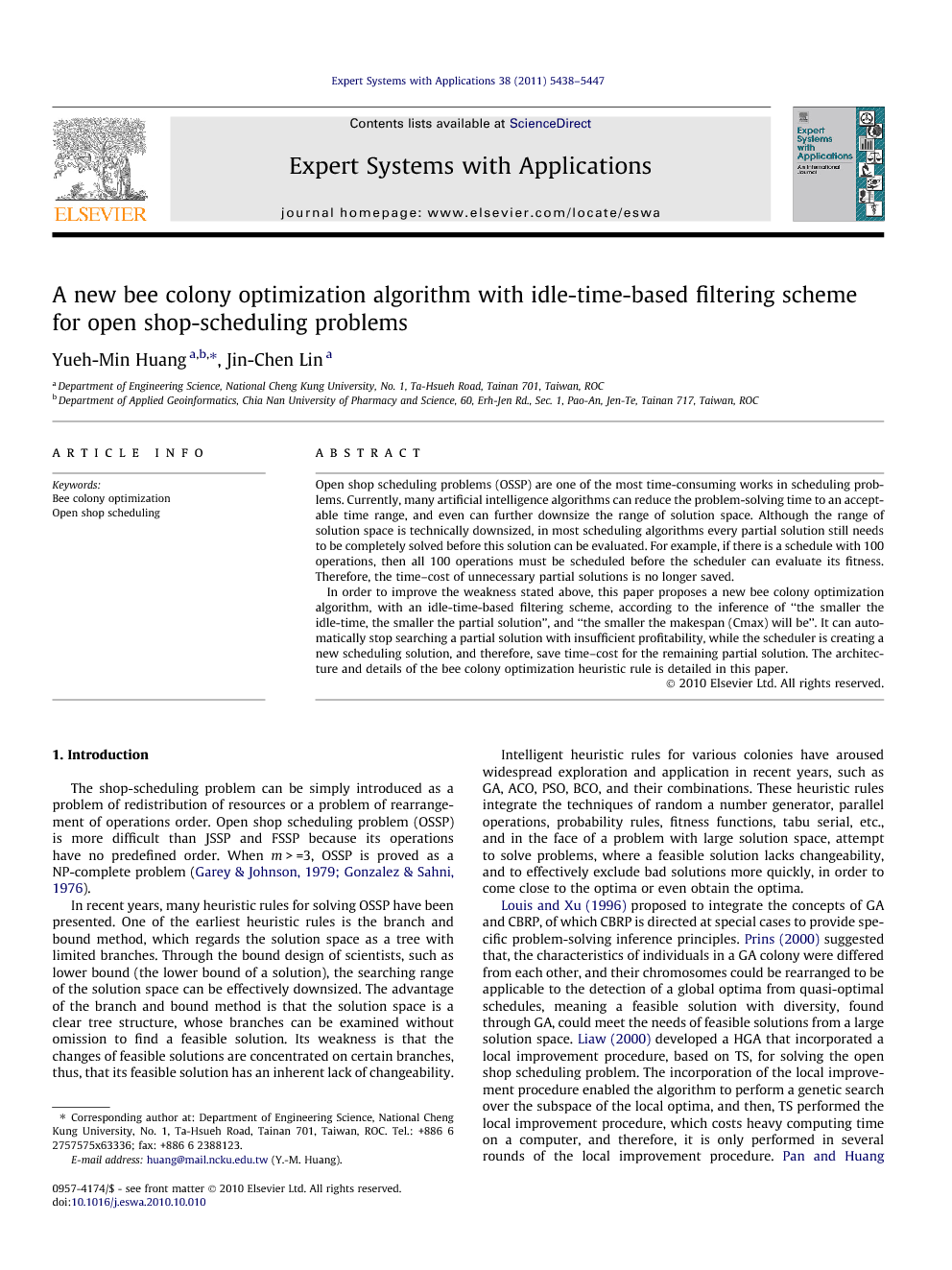 Open shop scheduling problems (OSSP) are one of the most time-consuming works in scheduling problems. Currently, many artificial intelligence algorithms can reduce the problem-solving time to an acceptable time range, and even can further downsize the range of solution space. Although the range of solution space is technically downsized, in most scheduling algorithms every partial solution still needs to be completely solved before this solution can be evaluated. For example, if there is a schedule with 100 operations, then all 100 operations must be scheduled before the scheduler can evaluate its fitness. Therefore, the time–cost of unnecessary partial solutions is no longer saved. In order to improve the weakness stated above, this paper proposes a new bee colony optimization algorithm, with an idle-time-based filtering scheme, according to the inference of “the smaller the idle-time, the smaller the partial solution”, and the “smaller the makespan (Cmax) will be”. It can automatically stop searching a partial solution with insufficient profitability, while the scheduler is creating a new scheduling solution, and therefore, save time–cost for the remaining partial solution. The architecture and details of the bee colony optimization heuristic rule is detailed in this paper.

This paper proposes a novel bee colony optimization algorithm for solving OSSP, which could largely decrease the T (the summation of all time–costs for obtaining all solutions) and t (the time–cost for obtaining the optima) times of the algorithm. The concrete details of heuristic rules of solving combinatorial optimization problems would vary with different problems. In order to shorten the time–cost for obtaining a possible bad solution, an idle-time-based filtering scheme is presented based on the processes of the Forward Pass of bee’s foraging behaviors. The scheme takes each scheduling operation as a foraging area; and in the course of bee colony foraging, the idle-time of partial scheduling is regarded as the reciprocal of profitability, therefore, the larger the idle-time is, the smaller the profitability is. When the profitability of a partial foraging route of a bee is smaller than the average profitability accepted by the colony, this scheduler would automatically stop searching the foraging trip of this particular bee, while the scheduler continues creating a new scheduling solution, thus, saving time–cost for remaining partial solutions. Teodorovic et al. (2006) adopted the operations of abandon, continue, dance, and recruitment of the peers in the Backward Pass. In order to highlight the classification operations of information sharing and division of work by forager bees in the Backward Pass, this paper adjusts the Backward Pass for the roles of classification operations for dancer, follower, and scout. This adjustment converts the classification of abandon routes, dance, and recruitment the peers into the classification of follower or dancer, and turns the operation of continuing in the classification of scout. This classification makes clear the roles played by different forager bees. For the BCO heuristic rules, future study could attempt to develop a new “profitability equation”, and new methods to “follow” the dancer bee. For OSSP, future study can use a “different decoder” to decode the priorities of various heuristic rules into a schedule. The new BCO framework developed by this paper provides a novel method of viewing computerized bee colony heuristic rules. Future researchers could use or add this new BCO framework into their fields of application for solving other scheduling problems or combinatorial optimization problems.