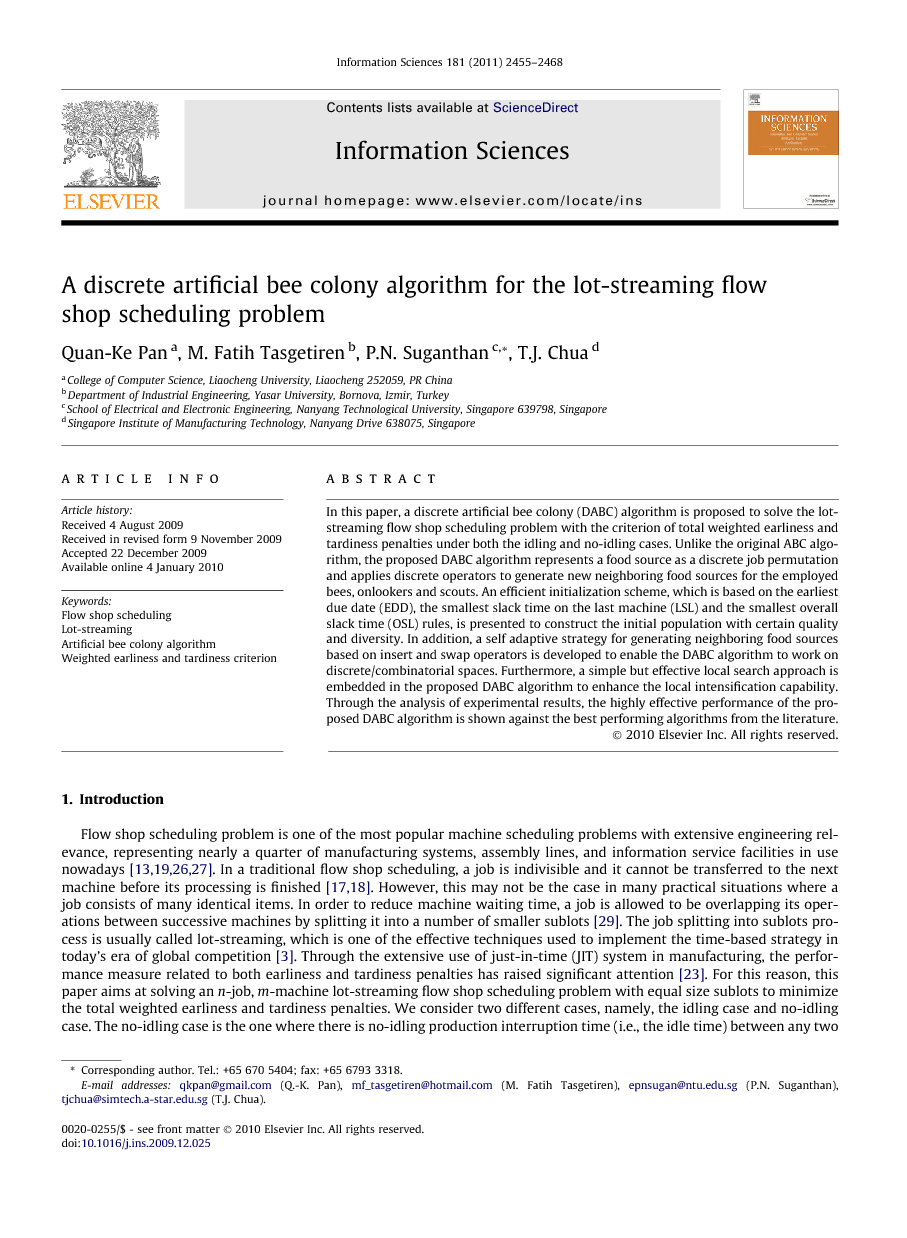 In this paper, a discrete artificial bee colony (DABC) algorithm is proposed to solve the lot-streaming flow shop scheduling problem with the criterion of total weighted earliness and tardiness penalties under both the idling and no-idling cases. Unlike the original ABC algorithm, the proposed DABC algorithm represents a food source as a discrete job permutation and applies discrete operators to generate new neighboring food sources for the employed bees, onlookers and scouts. An efficient initialization scheme, which is based on the earliest due date (EDD), the smallest slack time on the last machine (LSL) and the smallest overall slack time (OSL) rules, is presented to construct the initial population with certain quality and diversity. In addition, a self adaptive strategy for generating neighboring food sources based on insert and swap operators is developed to enable the DABC algorithm to work on discrete/combinatorial spaces. Furthermore, a simple but effective local search approach is embedded in the proposed DABC algorithm to enhance the local intensification capability. Through the analysis of experimental results, the highly effective performance of the proposed DABC algorithm is shown against the best performing algorithms from the literature.

This paper aimed at minimizing total weighted earliness and tardiness penalties for the lot-streaming flow shop scheduling problems with equal sized sublots. We examined the problem under both the idling and no-idling cases and proposed a novel discrete artificial bee colony (DABC) algorithm. To the best of our knowledge, this was the first reported application of the ABC algorithm for solving the problem under consideration. In the proposed algorithm, the food sources were represented as discrete job permutations. The ABC-based searching mechanism with an effective population initialization approach and a self-adaptive neighboring food source generation strategy were developed to perform exploration for promising solutions within the entire solution space. Furthermore, a simple but effective local search algorithm was employed to further exploit the best solution. Due to the reasonable hybridization of the ABC search and local search, the proposed DABC algorithm had the ability to obtain good results for the lot-streaming flow shop scheduling problems with total weighted earliness and tardiness criterion. Computational simulations and comparisons demonstrated the effectiveness and efficiency of the proposed DABC algorithm. Our future work is to investigate the other meta-heuristics for the lot-streaming flow shop problem and generalize the application of the ABC algorithms to solve other combinatorial optimization problems.