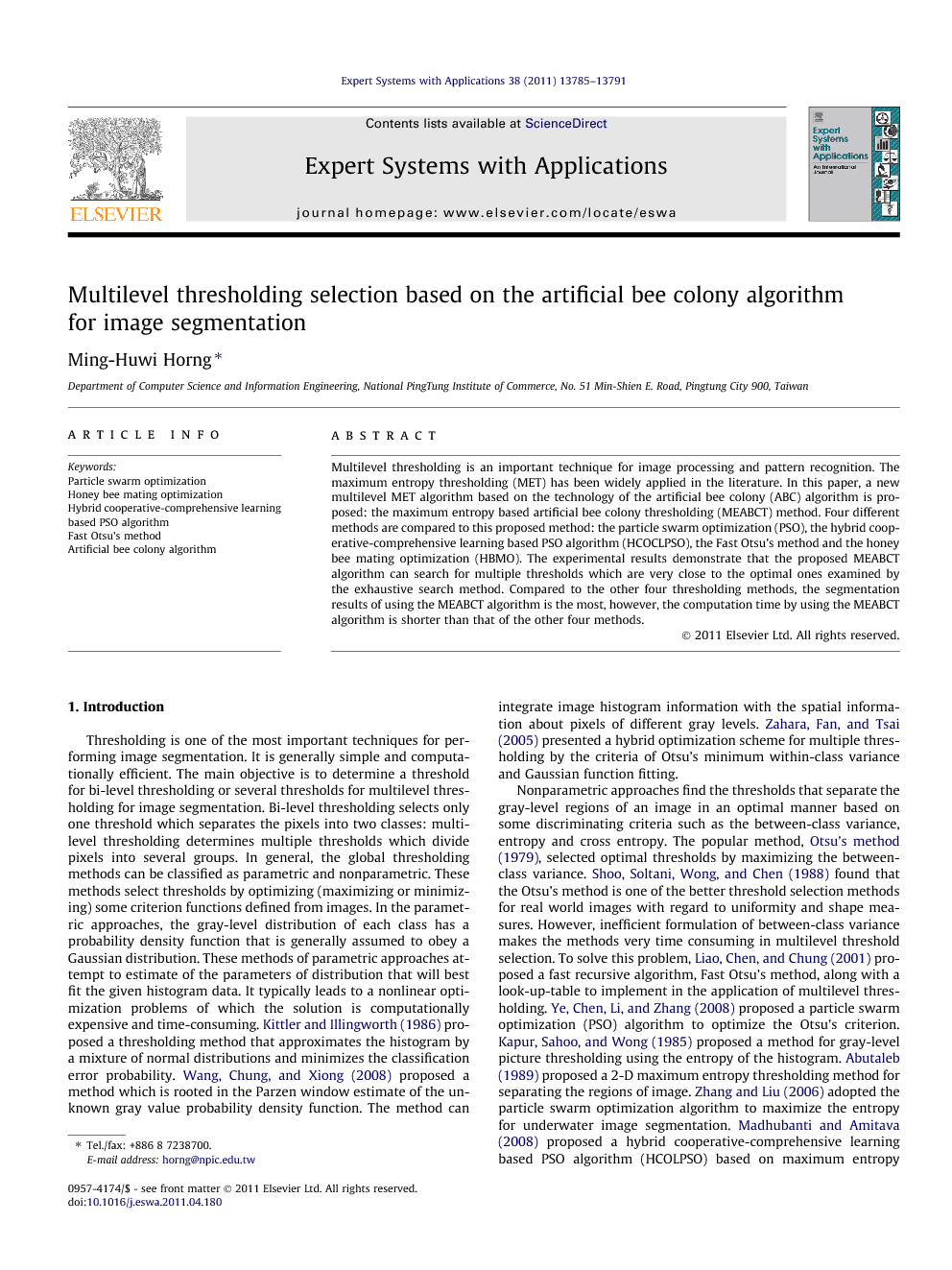 Multilevel thresholding is an important technique for image processing and pattern recognition. The maximum entropy thresholding (MET) has been widely applied in the literature. In this paper, a new multilevel MET algorithm based on the technology of the artificial bee colony (ABC) algorithm is proposed: the maximum entropy based artificial bee colony thresholding (MEABCT) method. Four different methods are compared to this proposed method: the particle swarm optimization (PSO), the hybrid cooperative-comprehensive learning based PSO algorithm (HCOCLPSO), the Fast Otsu’s method and the honey bee mating optimization (HBMO). The experimental results demonstrate that the proposed MEABCT algorithm can search for multiple thresholds which are very close to the optimal ones examined by the exhaustive search method. Compared to the other four thresholding methods, the segmentation results of using the MEABCT algorithm is the most, however, the computation time by using the MEABCT algorithm is shorter than that of the other four methods.

Thresholding is one of the most important techniques for performing image segmentation. It is generally simple and computationally efficient. The main objective is to determine a threshold for bi-level thresholding or several thresholds for multilevel thresholding for image segmentation. Bi-level thresholding selects only one threshold which separates the pixels into two classes: multilevel thresholding determines multiple thresholds which divide pixels into several groups. In general, the global thresholding methods can be classified as parametric and nonparametric. These methods select thresholds by optimizing (maximizing or minimizing) some criterion functions defined from images. In the parametric approaches, the gray-level distribution of each class has a probability density function that is generally assumed to obey a Gaussian distribution. These methods of parametric approaches attempt to estimate of the parameters of distribution that will best fit the given histogram data. It typically leads to a nonlinear optimization problems of which the solution is computationally expensive and time-consuming. Kittler and Illingworth (1986) proposed a thresholding method that approximates the histogram by a mixture of normal distributions and minimizes the classification error probability. Wang, Chung, and Xiong (2008) proposed a method which is rooted in the Parzen window estimate of the unknown gray value probability density function. The method can integrate image histogram information with the spatial information about pixels of different gray levels. Zahara, Fan, and Tsai (2005) presented a hybrid optimization scheme for multiple thresholding by the criteria of Otsu’s minimum within-class variance and Gaussian function fitting. Nonparametric approaches find the thresholds that separate the gray-level regions of an image in an optimal manner based on some discriminating criteria such as the between-class variance, entropy and cross entropy. The popular method, Otsu’s method (1979), selected optimal thresholds by maximizing the between-class variance. Shoo, Soltani, Wong, and Chen (1988) found that the Otsu’s method is one of the better threshold selection methods for real world images with regard to uniformity and shape measures. However, inefficient formulation of between-class variance makes the methods very time consuming in multilevel threshold selection. To solve this problem, Liao, Chen, and Chung (2001) proposed a fast recursive algorithm, Fast Otsu’s method, along with a look-up-table to implement in the application of multilevel thresholding. Ye, Chen, Li, and Zhang (2008) proposed a particle swarm optimization (PSO) algorithm to optimize the Otsu’s criterion. Kapur, Sahoo, and Wong (1985) proposed a method for gray-level picture thresholding using the entropy of the histogram. Abutaleb (1989) proposed a 2-D maximum entropy thresholding method for separating the regions of image. Zhang and Liu (2006) adopted the particle swarm optimization algorithm to maximize the entropy for underwater image segmentation. Madhubanti and Amitava (2008) proposed a hybrid cooperative-comprehensive learning based PSO algorithm (HCOLPSO) based on maximum entropy criterion. Li and Lee (1993) proposed a method which selects the threshold by minimizing the cross entropy between the original and segmented images. Yin (2007) developed a recursive programming techniques to reduce the order of magnitude of computing the multilevel thresholds and further used the PSO algorithm to minimize the cross entropy. Horng (2010) applied the honey bee mating optimization (HBMO) to search for the thresholds of histogram of image. The developed method was called maximum entropy honey bee mating optimization (MEHBOT) algorithm. The experimental results demonstrated that the result of the MEHBOT algorithm was superior to other algorithms such as the PSO, HCOLPSO and Fast Otsu’s methods. Hammouche, Diag, and Siarry (2010) compared various meta-heuristic techniques implemented in the multilevel thresholding. They found that the differential evolution was the most efficient and the particle swarm optimization converged the most quickly. Over the last decade, modeling the behavior of social insects, such as ants and bees, for the purpose of search and problems solving has been the context of the emerging area of swarm intelligence. The artificial bee colony (ABC) algorithm may also be considered as a typical swarm-based approach for optimization, in which the search algorithm is inspired by the foraging behavior of bee colonies. The search algorithm has led to the emergence of collective intelligence of bee swarms consisting of three essential components: food source, employed foragers and unemployed forages. There are two leading modes of the bee colony behavior: recruitment to and abandonment of a food source. The unemployed forages are onlookers and scouts. Karaboga and Basturk (2007) have recently proposed a developed model of the artificial bee colony (ABC) algorithm that simulated these social behaviors of honey bees for searching for the numerical optimization problems. Singh (2009) applied the ABC algorithm, called the ABC-LCMST algorithm, for the leaf-constrained minimum spanning tree problem. Computational results demonstrated the superiority of the new algorithm over other approaches such as ant colony algorithm and the tabu search. The performance of the ABC algorithm on clustering is also compared with set of results of clustering methods that are given in the work of Karaboga and Ozturk (2011). This paper applies the ABC algorithm to search for the multilevel thresholds using the maximum entropy (MET) criterion. This proposed method is called the maximum entropy based artificial bee colony thresholding (MEABCT) algorithm. In the experiments presented in this paper, the exhaustive search method is conducted to derive the optimal solutions for comparison with the results generated from MEABCT algorithm. The four different methods – the PSO, the hybrid cooperative-comprehensive learning based PSO algorithm (HCOCLPSO), the Fast Otsu’s method, and the MEHBMOT – are implemented in the several real images for purposes of comparison. The remainder of the paper is organized as follows: Section 2 introduces the artificial bee colony algorithm. Section 3 presents the proposed MEABCT algorithm. Performance evaluation and experimental results are presented in detail in Section 4. Finally, some conclusions are made in Section 5.