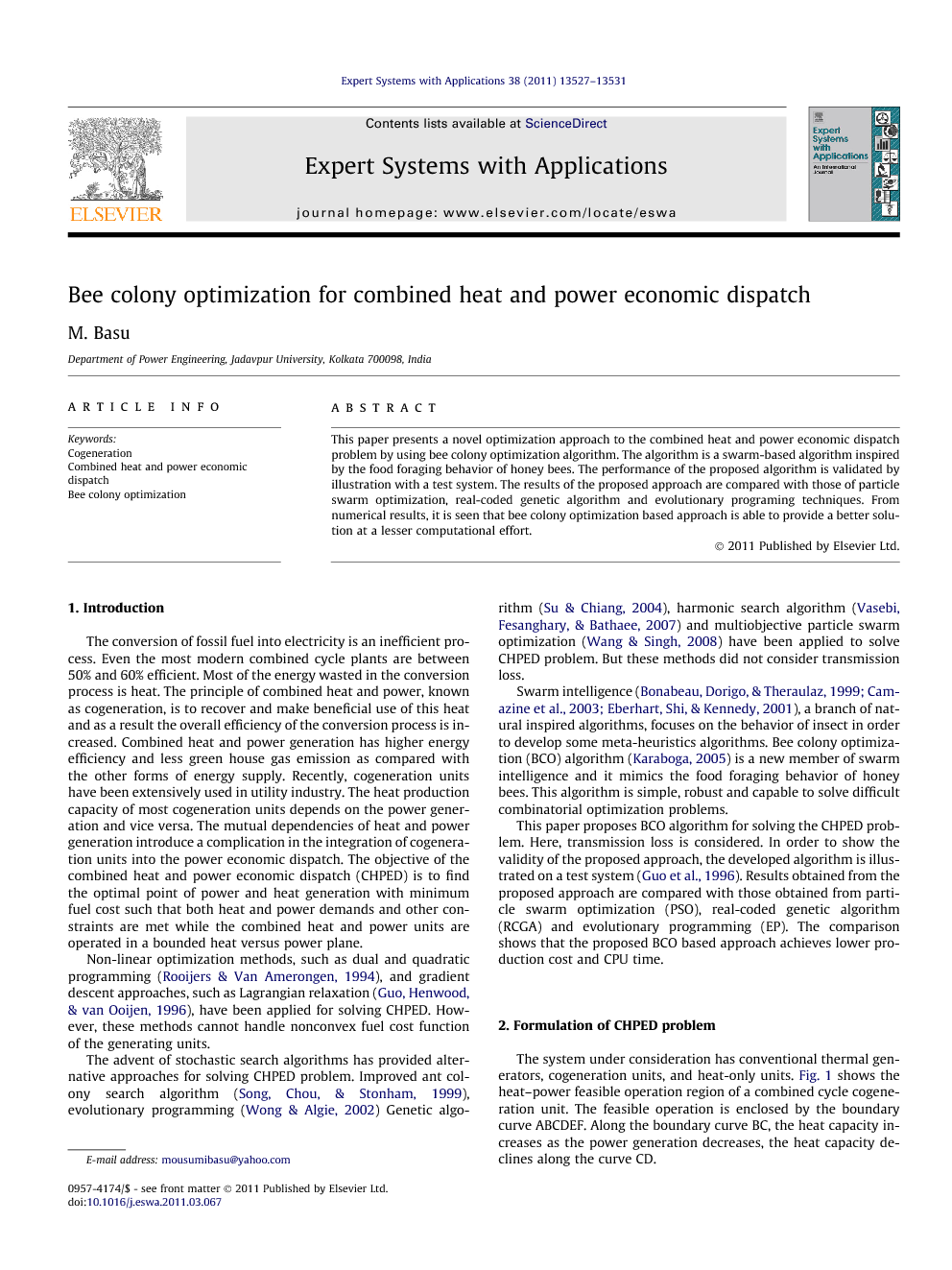 The conversion of fossil fuel into electricity is an inefficient process. Even the most modern combined cycle plants are between 50% and 60% efficient. Most of the energy wasted in the conversion process is heat. The principle of combined heat and power, known as cogeneration, is to recover and make beneficial use of this heat and as a result the overall efficiency of the conversion process is increased. Combined heat and power generation has higher energy efficiency and less green house gas emission as compared with the other forms of energy supply. Recently, cogeneration units have been extensively used in utility industry. The heat production capacity of most cogeneration units depends on the power generation and vice versa. The mutual dependencies of heat and power generation introduce a complication in the integration of cogeneration units into the power economic dispatch. The objective of the combined heat and power economic dispatch (CHPED) is to find the optimal point of power and heat generation with minimum fuel cost such that both heat and power demands and other constraints are met while the combined heat and power units are operated in a bounded heat versus power plane. Non-linear optimization methods, such as dual and quadratic programming (Rooijers & Van Amerongen, 1994), and gradient descent approaches, such as Lagrangian relaxation (Guo, Henwood, & van Ooijen, 1996), have been applied for solving CHPED. However, these methods cannot handle nonconvex fuel cost function of the generating units. The advent of stochastic search algorithms has provided alternative approaches for solving CHPED problem. Improved ant colony search algorithm (Song, Chou, & Stonham, 1999), evolutionary programming (Wong & Algie, 2002) Genetic algorithm (Su & Chiang, 2004), harmonic search algorithm (Vasebi, Fesanghary, & Bathaee, 2007) and multiobjective particle swarm optimization (Wang & Singh, 2008) have been applied to solve CHPED problem. But these methods did not consider transmission loss. Swarm intelligence (Bonabeau et al., 1999, Camazine et al., 2003 and Eberhart et al., 2001), a branch of natural inspired algorithms, focuses on the behavior of insect in order to develop some meta-heuristics algorithms. Bee colony optimization (BCO) algorithm (Karaboga, 2005) is a new member of swarm intelligence and it mimics the food foraging behavior of honey bees. This algorithm is simple, robust and capable to solve difficult combinatorial optimization problems. This paper proposes BCO algorithm for solving the CHPED problem. Here, transmission loss is considered. In order to show the validity of the proposed approach, the developed algorithm is illustrated on a test system (Guo et al., 1996). Results obtained from the proposed approach are compared with those obtained from particle swarm optimization (PSO), real-coded genetic algorithm (RCGA) and evolutionary programming (EP). The comparison shows that the proposed BCO based approach achieves lower production cost and CPU time.