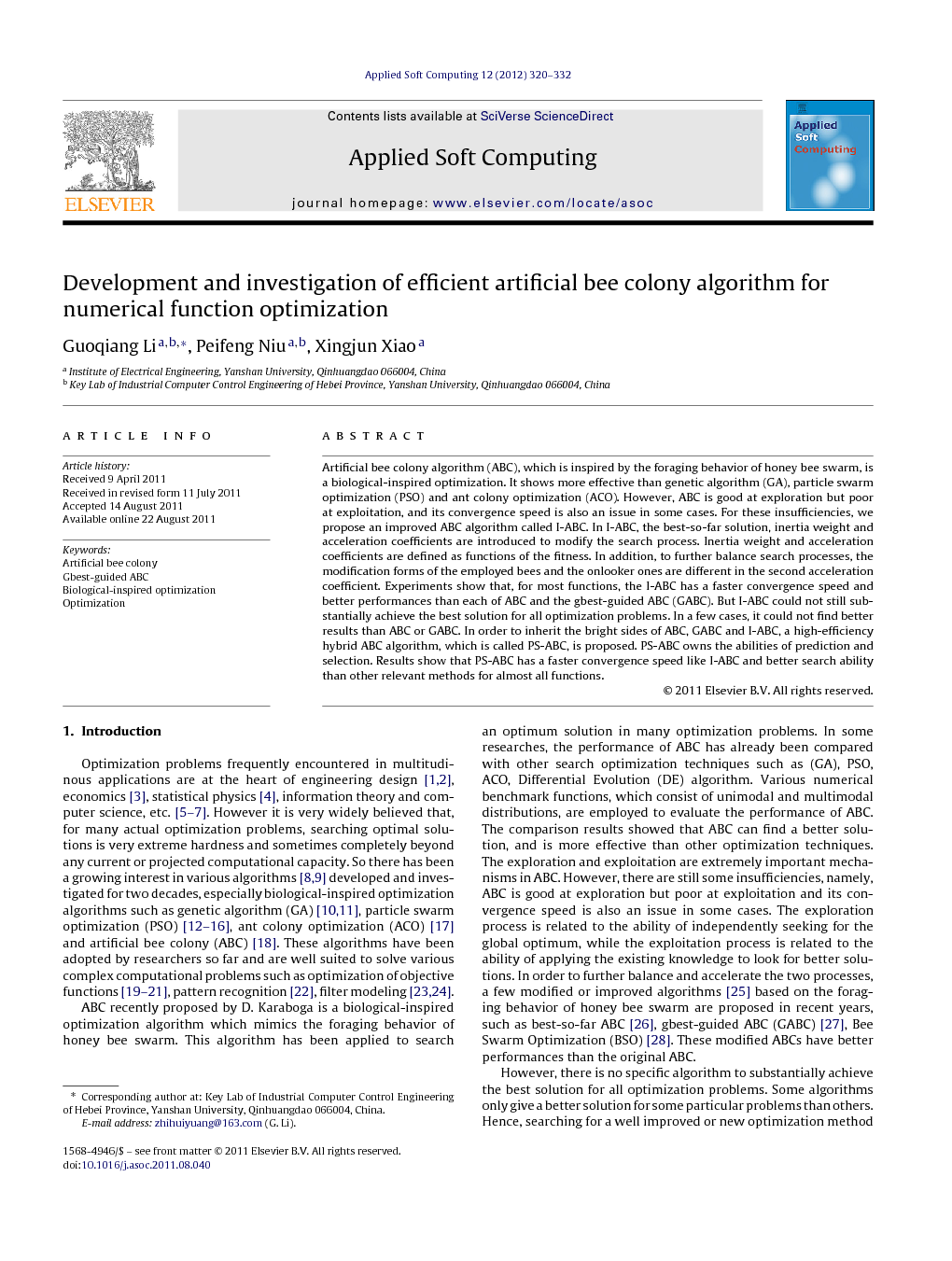 Artificial bee colony algorithm (ABC), which is inspired by the foraging behavior of honey bee swarm, is a biological-inspired optimization. It shows more effective than genetic algorithm (GA), particle swarm optimization (PSO) and ant colony optimization (ACO). However, ABC is good at exploration but poor at exploitation, and its convergence speed is also an issue in some cases. For these insufficiencies, we propose an improved ABC algorithm called I-ABC. In I-ABC, the best-so-far solution, inertia weight and acceleration coefficients are introduced to modify the search process. Inertia weight and acceleration coefficients are defined as functions of the fitness. In addition, to further balance search processes, the modification forms of the employed bees and the onlooker ones are different in the second acceleration coefficient. Experiments show that, for most functions, the I-ABC has a faster convergence speed and better performances than each of ABC and the gbest-guided ABC (GABC). But I-ABC could not still substantially achieve the best solution for all optimization problems. In a few cases, it could not find better results than ABC or GABC. In order to inherit the bright sides of ABC, GABC and I-ABC, a high-efficiency hybrid ABC algorithm, which is called PS-ABC, is proposed. PS-ABC owns the abilities of prediction and selection. Results show that PS-ABC has a faster convergence speed like I-ABC and better search ability than other relevant methods for almost all functions.

Optimization problems frequently encountered in multitudinous applications are at the heart of engineering design [1] and [2], economics [3], statistical physics [4], information theory and computer science, etc. [5], [6] and [7]. However it is very widely believed that, for many actual optimization problems, searching optimal solutions is very extreme hardness and sometimes completely beyond any current or projected computational capacity. So there has been a growing interest in various algorithms [8] and [9] developed and investigated for two decades, especially biological-inspired optimization algorithms such as genetic algorithm (GA) [10] and [11], particle swarm optimization (PSO) [12], [13], [14], [15] and [16], ant colony optimization (ACO) [17] and artificial bee colony (ABC) [18]. These algorithms have been adopted by researchers so far and are well suited to solve various complex computational problems such as optimization of objective functions [19], [20] and [21], pattern recognition [22], filter modeling [23] and [24]. ABC recently proposed by D. Karaboga is a biological-inspired optimization algorithm which mimics the foraging behavior of honey bee swarm. This algorithm has been applied to search an optimum solution in many optimization problems. In some researches, the performance of ABC has already been compared with other search optimization techniques such as (GA), PSO, ACO, Differential Evolution (DE) algorithm. Various numerical benchmark functions, which consist of unimodal and multimodal distributions, are employed to evaluate the performance of ABC. The comparison results showed that ABC can find a better solution, and is more effective than other optimization techniques. The exploration and exploitation are extremely important mechanisms in ABC. However, there are still some insufficiencies, namely, ABC is good at exploration but poor at exploitation and its convergence speed is also an issue in some cases. The exploration process is related to the ability of independently seeking for the global optimum, while the exploitation process is related to the ability of applying the existing knowledge to look for better solutions. In order to further balance and accelerate the two processes, a few modified or improved algorithms [25] based on the foraging behavior of honey bee swarm are proposed in recent years, such as best-so-far ABC [26], gbest-guided ABC (GABC) [27], Bee Swarm Optimization (BSO) [28]. These modified ABCs have better performances than the original ABC. However, there is no specific algorithm to substantially achieve the best solution for all optimization problems. Some algorithms only give a better solution for some particular problems than others. Hence, searching for a well improved or new optimization method is very necessary. In this paper, we propose a high-efficiency ABC method to further improve the performance of ABC. The improved ABC, which is called I-ABC, has an extremely fast convergence speed. There are three major differences between ABC and I-ABC. Namely, the best-so-far solution, inertia weight and acceleration coefficients are introduced to modify the search process, and inertia weight and acceleration coefficients are defined as functions of the fitness. In addition, to further balance the exploitation and exploration processes, the modification forms of the employed bees and the onlooker ones are different in the second acceleration coefficient. Simulation results show that the I-ABC could not only find the global optimal values for many numerical benchmark functions, but also own an extremely fast convergence speed. However, in only a few cases, the I-ABC traps in local optimal solutions and cannot find better solutions than ABC or GABC. In order to combine the bright sides of I-ABC, ABC and GABC, the paper proposes a high-efficiency hybrid ABC algorithm which has the abilities of prediction and selection. This hybrid optimization method is called as PS-ABC. In PS-ABC algorithm, every employed bee or looked bee could predict their next solutions by three different solution search equations, and select the best one. Then the bee could decide where they should go to explore or exploit. Simulation results show that the PS-ABC could not only have the advantages of I-ABC, but also own the bright sides of ABC and GABC. Namely, PS-ABC owns an extremely fast convergence speed like I-ABC and very good search performance. Recently, the use of advanced soft computing techniques [29], [30], [31], [32], [33], [34], [35], [36], [37], [38], [39], [40], [41], [42] and [43] is increasingly required in multitudinous applications for processing huge amounts of uncertain data. Soft computing, which is a consortium of powerful tools including Neural Networks, Fuzzy Systems, Evolutionary Computing, Swarm Intelligence and Probabilistic Reasoning, deals with imprecision, uncertainty, partial truth, and approximation to achieve tractability, robustness and low solution cost. Soft computing is being used successfully in many areas including pattern recognition [44] and [45], complex process control and optimization [46], [47] and [48], medical diagnosis and engineering [49], [50] and [51], stock market prediction [52]. Unlike most soft computing techniques, I-ABC and PS-ABC do not need gradient information of the objective function. They are proposed to improve the basic ABC algorithm in order to jump out of the local optimum as well as speed up the process of finding the optimal parameters. In addition, they are capable of producing low cost, fast, and reasonably accurate solutions to complex problems. Thus, they may be used, like other heuristic intelligence optimization algorithms, in multitudinous applications in order to enhance the performance of the entire process. The two proposed methods may be adopted to optimize other soft computing tools in order to make them effective and robust in coping with uncertainty, insufficient information, and noise. They could be taken as new optimization techniques which could not only play the role of compensation for soft computing, but also promote the development, investigation and application of other soft computing methods in the near future. The paper is organized as follows: the original ABC algorithm is reviewed in Section 2. Section 3 describes the proposed I-ABC algorithm, which has an extremely fast convergence speed. Section 4 describes the PS-ABC algorithm, which has the abilities of prediction and selection. The simulation results are shown in Section 5. Finally, Section 6 makes a summary of this paper.

The I-ABC is proposed to improve the performance of ABC and simultaneously quicken the convergence speed. Both PS-ABC and I-ABC are applied to 13 classical test function problems. Although the I-ABC could not find better solutions than ABC or GABC in only a few functions, the I-ABC could have a faster convergence speed and better performances than ABC or GABC for most functions. Therefore, the I-ABC could be thought as a very efficient optimization algorithm. The sophisticated PS-ABC algorithm is proposed to apply to optimization problems in this paper. The configurations, which consist of three methods, ABC, GABC and I-ABC, are investigated to improve the global search ability and simultaneously enhance convergence speed of PS-ABC. The results indicate that the search ability of PS-ABC has been improved. In addition, the new hybrid algorithm shows the very fast convergence like I-ABC. In PS-ABC, the three search equations are independently calculated, but influence each other by the chosen best solution. On the whole, the PS-ABC could be thought as the combination of the bright sides of the other algorithms.