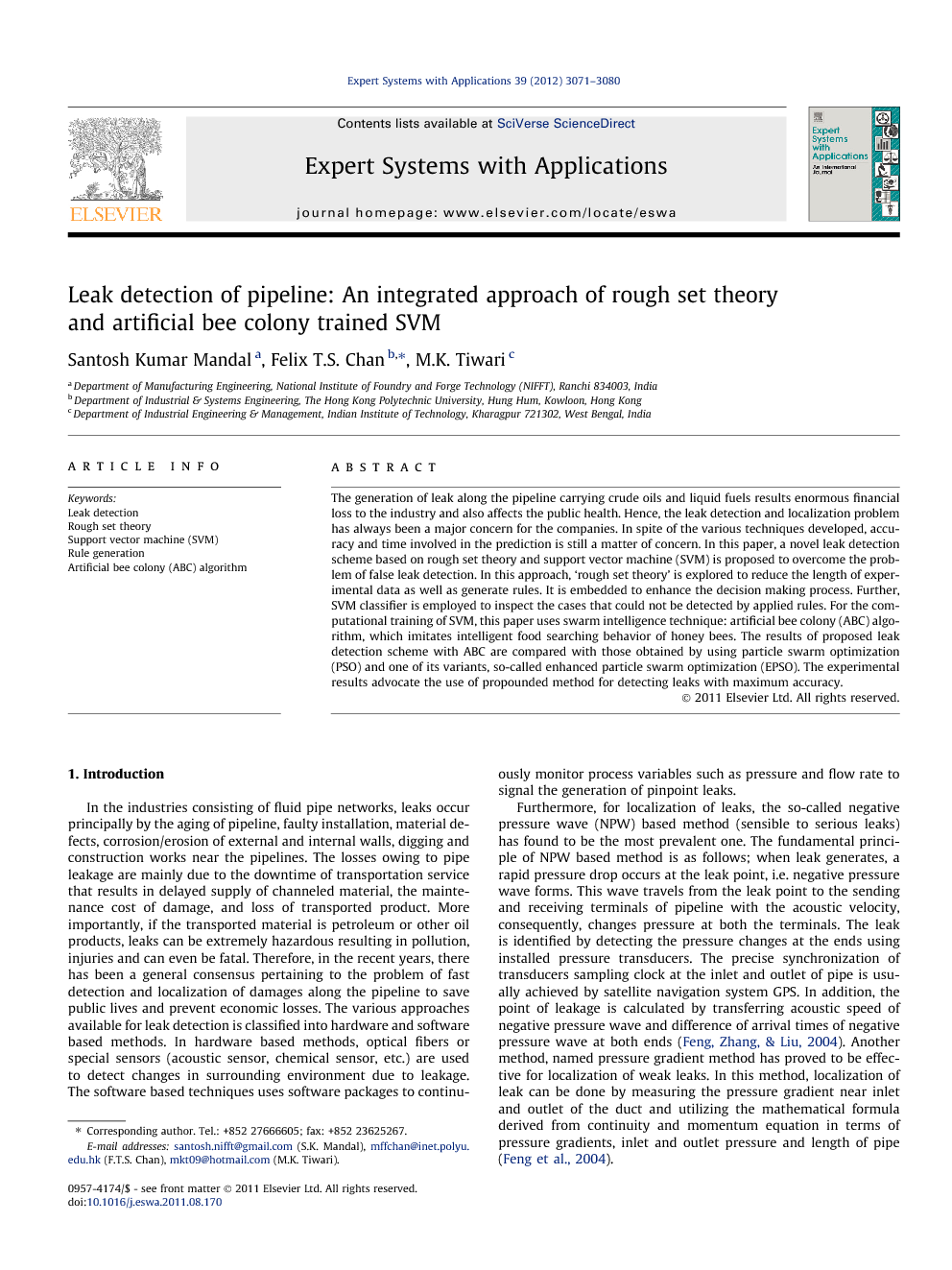 The generation of leak along the pipeline carrying crude oils and liquid fuels results enormous financial loss to the industry and also affects the public health. Hence, the leak detection and localization problem has always been a major concern for the companies. In spite of the various techniques developed, accuracy and time involved in the prediction is still a matter of concern. In this paper, a novel leak detection scheme based on rough set theory and support vector machine (SVM) is proposed to overcome the problem of false leak detection. In this approach, ‘rough set theory’ is explored to reduce the length of experimental data as well as generate rules. It is embedded to enhance the decision making process. Further, SVM classifier is employed to inspect the cases that could not be detected by applied rules. For the computational training of SVM, this paper uses swarm intelligence technique: artificial bee colony (ABC) algorithm, which imitates intelligent food searching behavior of honey bees. The results of proposed leak detection scheme with ABC are compared with those obtained by using particle swarm optimization (PSO) and one of its variants, so-called enhanced particle swarm optimization (EPSO). The experimental results advocate the use of propounded method for detecting leaks with maximum accuracy.

In the industries consisting of fluid pipe networks, leaks occur principally by the aging of pipeline, faulty installation, material defects, corrosion/erosion of external and internal walls, digging and construction works near the pipelines. The losses owing to pipe leakage are mainly due to the downtime of transportation service that results in delayed supply of channeled material, the maintenance cost of damage, and loss of transported product. More importantly, if the transported material is petroleum or other oil products, leaks can be extremely hazardous resulting in pollution, injuries and can even be fatal. Therefore, in the recent years, there has been a general consensus pertaining to the problem of fast detection and localization of damages along the pipeline to save public lives and prevent economic losses. The various approaches available for leak detection is classified into hardware and software based methods. In hardware based methods, optical fibers or special sensors (acoustic sensor, chemical sensor, etc.) are used to detect changes in surrounding environment due to leakage. The software based techniques uses software packages to continuously monitor process variables such as pressure and flow rate to signal the generation of pinpoint leaks. Furthermore, for localization of leaks, the so-called negative pressure wave (NPW) based method (sensible to serious leaks) has found to be the most prevalent one. The fundamental principle of NPW based method is as follows; when leak generates, a rapid pressure drop occurs at the leak point, i.e. negative pressure wave forms. This wave travels from the leak point to the sending and receiving terminals of pipeline with the acoustic velocity, consequently, changes pressure at both the terminals. The leak is identified by detecting the pressure changes at the ends using installed pressure transducers. The precise synchronization of transducers sampling clock at the inlet and outlet of pipe is usually achieved by satellite navigation system GPS. In addition, the point of leakage is calculated by transferring acoustic speed of negative pressure wave and difference of arrival times of negative pressure wave at both ends (Feng, Zhang, & Liu, 2004). Another method, named pressure gradient method has proved to be effective for localization of weak leaks. In this method, localization of leak can be done by measuring the pressure gradient near inlet and outlet of the duct and utilizing the mathematical formula derived from continuity and momentum equation in terms of pressure gradients, inlet and outlet pressure and length of pipe (Feng et al., 2004). Various other tools have been developed and implemented by the researchers in the domain of leak detection and localization problems. In this paper, a novel approach that encompasses rough set theory and support vector machine (SVM) in conjunction with artificial bee colony (ABC) algorithm has been applied to improve the accuracy with reduced time of prediction of leaks along the pipeline carrying crude oil and liquid fuels. The rough set theory is applied to generate rules by mining simulated data set initially so that input parameters and length of data set can be reduced. The generated set of rules is employed as a guideline for detection service in order to accomplish direct inspection of abnormalities. Further, the classifier function of SVM has been used to finally inspect remaining doubtful cases. The support SVM which is a variant of artificial neural network (ANN) algorithm, proposed by Vapnik (1995), has emerged as an effective tool for solving classification and regression problems. While literature survey, various successful applications of SVM was found including; Niu, Wang, and Wu (2010) for power load forecasting, Serapião, Tavares, Mendes, and Guilhermi (2006) in classification of petroleum well drilling operation, Claudio, Rocco, and Zio (2007) for classification of transients in nuclear power plant, Arun and Gopal (2009) for pattern classification, Chen (2007) for forecasting reliability of turbocharger engine system and Huang, Chen, Hsu, Chen, and Wu (2004) for corporate credit analysis. Inspired by aforementioned approaches, this paper implements SVM for investigation of presence of leaks. A practical difficulty that arises before using SVM classifier function in the diagnosis scheme is the need for optimum values of support vectors for each case of training dataset. It is very ineffective to use classical nonlinear optimization algorithms to train SVM (Yuan, Zhang, Zhang, & Yang, 2006). Thus, in this research, swarm intelligence technique known as ABC has been implemented to search suitable values of support vectors that could maximize detection accuracy. In order to judge the performance of ABC for the problem tackled in this study, the obtained results are compared with those achieved by particle swarm optimization (PSO) and one of its variants named as enhanced particle swarm optimization (EPSO). The remainder of this paper is organized as follows: Section 2 summarizes the previous work in the context of leak detection and localization problem. Section 3 describes the leak detection and localization problem in detail and also provides detail of rough set theory. The developed leak detection scheme has been elaborated in Section 4. In Section 5, overview of ABC, PSO, and EPSO algorithms is presented. The Section 6 summarizes computational experience and the subsequent subsection analyzes the performance of applied algorithms. Section 7 presents the conclusion and future scope of the research work.

The leakages along the pipeline carrying crude oil and liquid fuels cause financial loss and environmental damages. This research brings a novel leak detection system that uses rough set theory and support vector machine trained by swarm intelligence technique known as ABC algorithm. The rough set theory was amalgamated to generate set of rules which first inspect the presence of any abnormalities. Then, the formulated SVM classifier investigates the remaining undecided cases. The performance of proposed model with ABC was compared with PSO and EPSO. The obtained high detection accuracy of 95.19% with ABC encourages the use of developed method in real world by reliability engineers. In summary, the advantages of presented technique are as: (1) It gives very high detection accuracy, (2) It can be used in both the places where mass balance and pressure point analysis techniques are especially utilized, (3) The detailed simulation of pipeline is not required and (4) It is very useful to detect leakages of old pipelines where the precise geometry and the state of the internal surface are not known. In future, this research can be extended by incorporating some more measures to prevent losses due to leaks such as leak size, response time, and location of leaks. Also, the effect of other process variables (such as temperature, friction factor etc.) on detection accuracy can be analyzed.