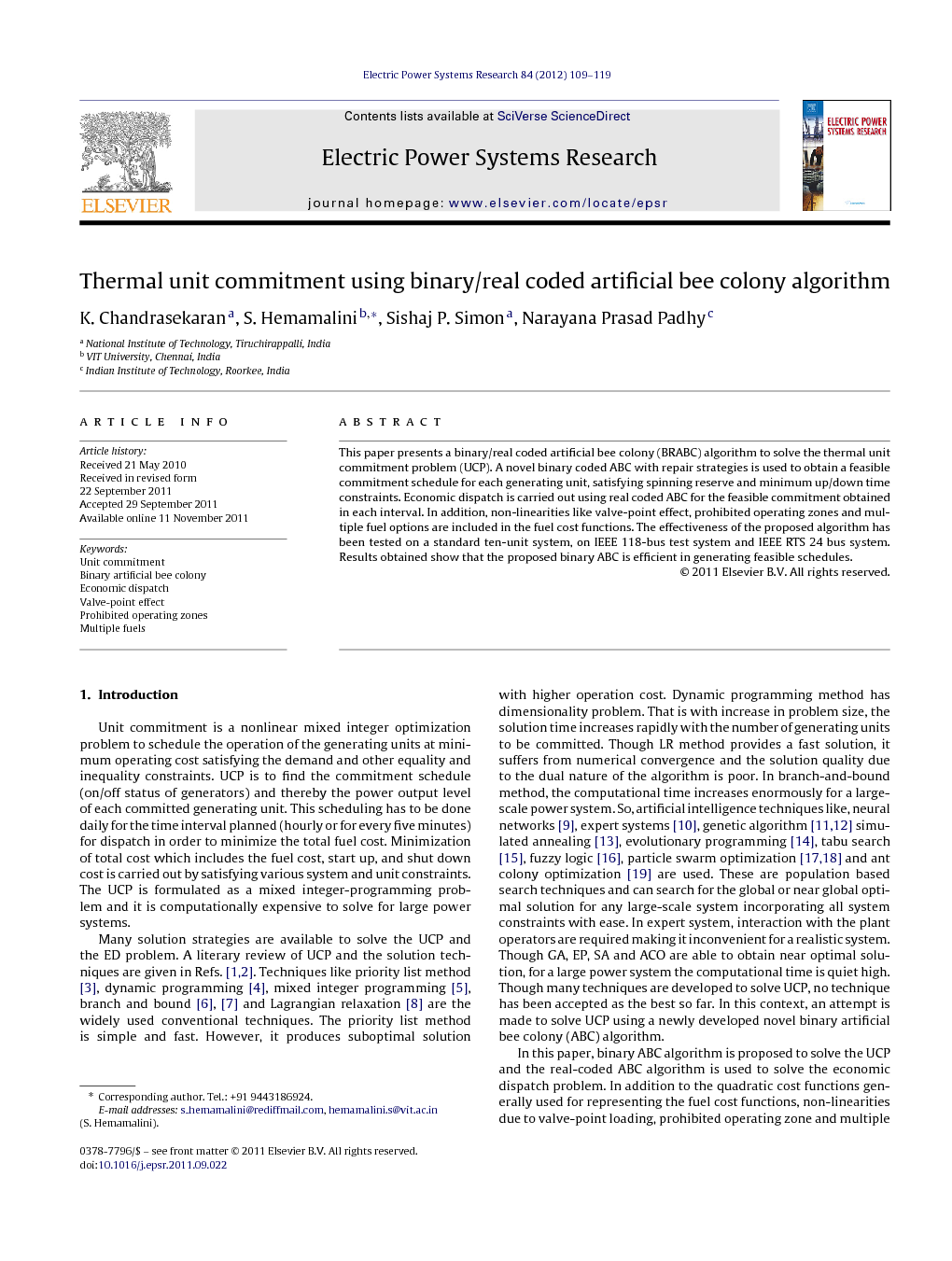 This paper presents a binary/real coded artificial bee colony (BRABC) algorithm to solve the thermal unit commitment problem (UCP). A novel binary coded ABC with repair strategies is used to obtain a feasible commitment schedule for each generating unit, satisfying spinning reserve and minimum up/down time constraints. Economic dispatch is carried out using real coded ABC for the feasible commitment obtained in each interval. In addition, non-linearities like valve-point effect, prohibited operating zones and multiple fuel options are included in the fuel cost functions. The effectiveness of the proposed algorithm has been tested on a standard ten-unit system, on IEEE 118-bus test system and IEEE RTS 24 bus system. Results obtained show that the proposed binary ABC is efficient in generating feasible schedules.

Unit commitment is a nonlinear mixed integer optimization problem to schedule the operation of the generating units at minimum operating cost satisfying the demand and other equality and inequality constraints. UCP is to find the commitment schedule (on/off status of generators) and thereby the power output level of each committed generating unit. This scheduling has to be done daily for the time interval planned (hourly or for every five minutes) for dispatch in order to minimize the total fuel cost. Minimization of total cost which includes the fuel cost, start up, and shut down cost is carried out by satisfying various system and unit constraints. The UCP is formulated as a mixed integer-programming problem and it is computationally expensive to solve for large power systems. Many solution strategies are available to solve the UCP and the ED problem. A literary review of UCP and the solution techniques are given in Refs. [1] and [2]. Techniques like priority list method [3], dynamic programming [4], mixed integer programming [5], branch and bound [6], [7] and Lagrangian relaxation [8] are the widely used conventional techniques. The priority list method is simple and fast. However, it produces suboptimal solution with higher operation cost. Dynamic programming method has dimensionality problem. That is with increase in problem size, the solution time increases rapidly with the number of generating units to be committed. Though LR method provides a fast solution, it suffers from numerical convergence and the solution quality due to the dual nature of the algorithm is poor. In branch-and-bound method, the computational time increases enormously for a large-scale power system. So, artificial intelligence techniques like, neural networks [9], expert systems [10], genetic algorithm [11] and [12] simulated annealing [13], evolutionary programming [14], tabu search [15], fuzzy logic [16], particle swarm optimization [17] and [18] and ant colony optimization [19] are used. These are population based search techniques and can search for the global or near global optimal solution for any large-scale system incorporating all system constraints with ease. In expert system, interaction with the plant operators are required making it inconvenient for a realistic system. Though GA, EP, SA and ACO are able to obtain near optimal solution, for a large power system the computational time is quiet high. Though many techniques are developed to solve UCP, no technique has been accepted as the best so far. In this context, an attempt is made to solve UCP using a newly developed novel binary artificial bee colony (ABC) algorithm. In this paper, binary ABC algorithm is proposed to solve the UCP and the real-coded ABC algorithm is used to solve the economic dispatch problem. In addition to the quadratic cost functions generally used for representing the fuel cost functions, non-linearities due to valve-point loading, prohibited operating zone and multiple fuel options are also incorporated. The algorithm presented in this paper is validated on a standard ten-unit system taken from the literature, IEEE 118-bus system and IEEE RTS 24 bus system. From the results, it can be inferred that the BRABC algorithm performs well.

In this paper, a novel binary ABC method is proposed to solve the UC problem. For a feasible commitment schedule, economic dispatch is performed using real coded ABC. The applicability and feasibility of this method is validated on 10-unit system and IEEE 118-bus system with 54 thermal units and also on IEEE RTS 24 bus system. Non-linearities introduced by valve-point loading, multiple fuel options and prohibited operating zones are incorporated in the fuel cost functions. Repair strategies are used for violation of minimum up/down time and power balance constraints. The comprehensive numerical results demonstrate the successful implementation and feasibility of the proposed technique even for a larger test case with non-linearities in the fuel cost function. The proposed binary ABC performs better in terms of solution quality and can be used for any large scale systems.