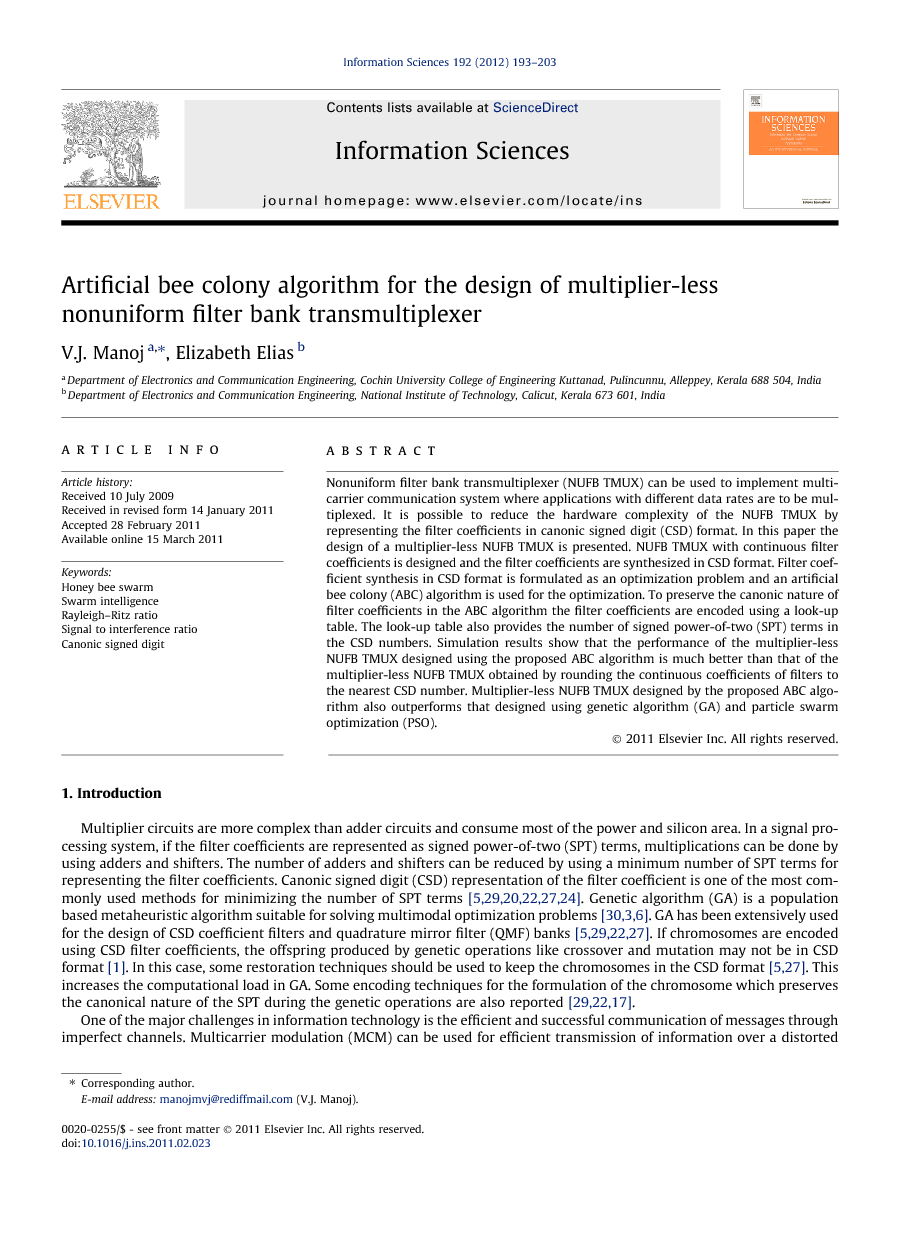 Multiplier circuits are more complex than adder circuits and consume most of the power and silicon area. In a signal processing system, if the filter coefficients are represented as signed power-of-two (SPT) terms, multiplications can be done by using adders and shifters. The number of adders and shifters can be reduced by using a minimum number of SPT terms for representing the filter coefficients. Canonic signed digit (CSD) representation of the filter coefficient is one of the most commonly used methods for minimizing the number of SPT terms [5], [29], [20], [22], [27] and [24]. Genetic algorithm (GA) is a population based metaheuristic algorithm suitable for solving multimodal optimization problems [30], [3] and [6]. GA has been extensively used for the design of CSD coefficient filters and quadrature mirror filter (QMF) banks [5], [29], [22] and [27]. If chromosomes are encoded using CSD filter coefficients, the offspring produced by genetic operations like crossover and mutation may not be in CSD format [1]. In this case, some restoration techniques should be used to keep the chromosomes in the CSD format [5] and [27]. This increases the computational load in GA. Some encoding techniques for the formulation of the chromosome which preserves the canonical nature of the SPT during the genetic operations are also reported [29], [22] and [17]. One of the major challenges in information technology is the efficient and successful communication of messages through imperfect channels. Multicarrier modulation (MCM) can be used for efficient transmission of information over a distorted channel [2]. Discrete multitone (DMT) and orthogonal frequency division multiplexing (OFDM) are considered as efficient multicarrier communication systems. However the frequency responses of their transmitting and receiving filters are very poor. In many applications it is often desired to have filters with better frequency responses. A filter bank technique can be used to design MCM with better transmitting and receiving filters [21], [15], [4], [8], [14] and [25]. Most of the studies of filter bank transmultiplexer focus on uniform frequency bandwidth in which the incoming data signals are assumed to have the same sampling rate. But a nonuniform filter bank transmultiplexer (NUFB TMUX) is required when we want to multiplex applications having different incoming data rates and different quality of service requirements. A few techniques were introduced for the design of the NUFB TMUX [4], [8] and [14]. The design techniques mentioned in [8] and [14] do not consider channel effect and hence they give good results only when the channel is ideal. When the transmission channel is frequency selective, an additional equalizer is needed at the receiver. Design of NUFB TMUX considering the channel effect is given in [4]. In this design, signal to interference ratio (SIR) is formulated as a Rayleigh–Ritz ratio whose solution is well known [9]. Only a simple one-tap equalizer is required at the receiver for channel equalization, as the effect of channel is taken into consideration at the time of the filter bank optimization. To improve the SIR, an iterative algorithm similar to that for the design of DFT modulated filter bank transmultiplexer [21] and cosine modulated filter bank transmultiplexer [15], is also given in [4]. The iterative algorithm severely affects the frequency responses of transmitting and receiving filters and results in nonlinear phase response in the transmitting and receiving filters. Artificial bee colony (ABC) algorithm is a recently introduced optimization algorithm based on the intelligent foraging behavior of honeybee swarm [10]. The neighbor production mechanism and selection schemes used in ABC algorithm make it suitable for solving local and global optimization problems. It is proved that ABC algorithm has the ability to get out of a local minimum and can be efficiently used for multivariable, multimodal function optimization [11]. The performances of ABC algorithm in solving multi-dimensional numeric problems, constrained optimization problems and discrete optimization problem are compared with some well known optimization algorithms in [13], [11], [12], [23] and [26]. Comparison results show that ABC is suitable for solving high dimensional, multimodel, discrete, constrained optimization problem. In this paper, our aim is to design multiplier-less NUFB TMUX. For this, a continuous coefficient NUFB TMUX is designed and the coefficients of the filters are synthesized in CSD format. Unlike in the case of a QMF lattice filter bank, we have to synthesize the coefficients of all the filters in CSD format in such a way that SIR is maximized. For this, coefficient synthesis of filters is modeled as constrained optimization problem. Objectives of the optimization problem are to maximize SIR and minimize the stopband energies of the filters constraining the number of SPT terms in the filters. This is a high dimensional, multimodal, discrete, constrained optimization problem. Particle swarm optimization (PSO) and GA have been used for the design of multiplier-less NUFB TMUX [16], [17] and [18]. Even though ABC algorithm is suitable for solving high dimensional, multimodal, discrete, constrained optimization problem it has not been used for the CSD coefficient synthesis of filters. Therefore we propose an ABC algorithm for the coefficient synthesis of filters in NUFB TMUX. The CSD filter coefficients are encoded as integers using a look-up table to preserve their canonic property under neighbor production mechanism used in ABC algorithm. The paper is organized as follows. The ABC algorithm is explained in Section 2. NUFB TMUX and SIR in NUFB TMUX are introduced in Section 3. In Section 4 the objective functions for the synthesis of filter coefficients are formulated. The encoding of CSD filter coefficients using the look-up table is explained in Section 5. Design of multiplier-less NUFB TMUX is given in Section 6. Simulation results are given in Section 7 and conclusions are presented in Section 8. Notations: 1. XT and X† are used for indicating transpose of X and conjugate transpose of X respectively. 2. For any real number y and any integer T, notation round(y)Tround(y)T represents rounding of y to the nearest integer in [−T,T] 3. E{•} represents statistical expectation.