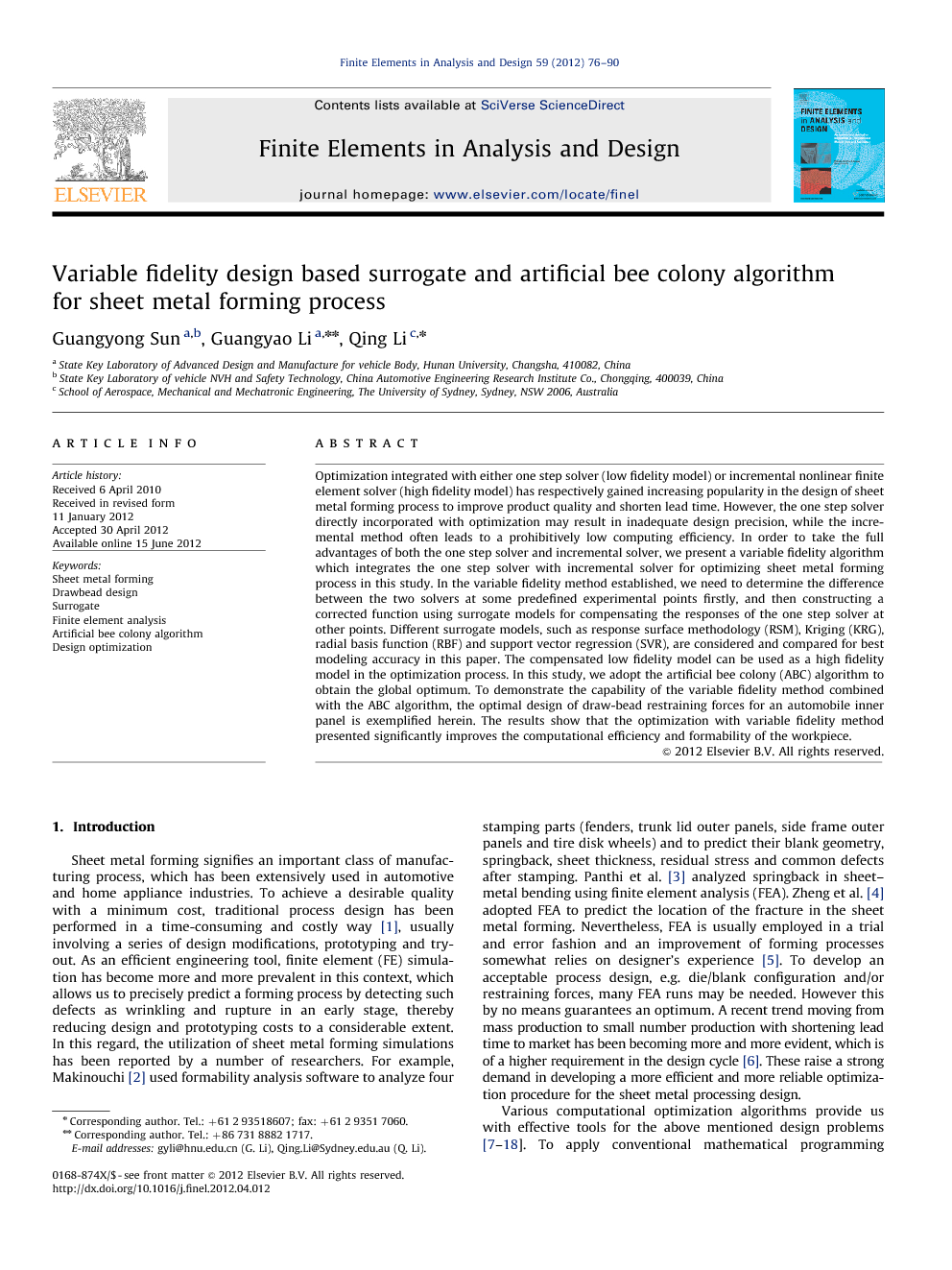 Optimization integrated with either one step solver (low fidelity model) or incremental nonlinear finite element solver (high fidelity model) has respectively gained increasing popularity in the design of sheet metal forming process to improve product quality and shorten lead time. However, the one step solver directly incorporated with optimization may result in inadequate design precision, while the incremental method often leads to a prohibitively low computing efficiency. In order to take the full advantages of both the one step solver and incremental solver, we present a variable fidelity algorithm which integrates the one step solver with incremental solver for optimizing sheet metal forming process in this study. In the variable fidelity method established, we need to determine the difference between the two solvers at some predefined experimental points firstly, and then constructing a corrected function using surrogate models for compensating the responses of the one step solver at other points. Different surrogate models, such as response surface methodology (RSM), Kriging (KRG), radial basis function (RBF) and support vector regression (SVR), are considered and compared for best modeling accuracy in this paper. The compensated low fidelity model can be used as a high fidelity model in the optimization process. In this study, we adopt the artificial bee colony (ABC) algorithm to obtain the global optimum. To demonstrate the capability of the variable fidelity method combined with the ABC algorithm, the optimal design of draw-bead restraining forces for an automobile inner panel is exemplified herein. The results show that the optimization with variable fidelity method presented significantly improves the computational efficiency and formability of the workpiece.

In this study, an efficient and accurate optimization method was developed for sheet metal forming process, which coupled a one-step method with the classical incremental method through the correction functions based upon surrogate modeling techniques. To construct a proper correction function, such typical surrogate approaches as response surface methodology (RSM), Kriging (KRG), radial basis function (RBF) and support vector regression (SVR), are considered and compared for the best modeling accuracy. One of the major advantages of the variable fidelity method consists in that it allows more sampling points being acquired without significant increase in computational cost. To quantify the quality of the sheet metal forming, both the rupture and wrinkling criteria were presented with respect to the design variables of restraining forces from the drawbeads. These two objective functions are presented in correction models and are used to formulate the unified cost function. A stochastic optimization algorithm, namely artificial bee colony (ABC) algorithm, is adopted in this study. The present procedure is demonstrated through solving an industrial scale problem of automobile inner panel. The formability of the optimal design is significantly improved in terms of the rupture and wrinkling criteria. It should be pointed out that addressing both the rupture and wrinkling criteria should be formulated as a multiobjective optimization, where a series of optimums may be obtained to form a Pareto front, which is however beyond the scope of this paper and can be addressed in the future.