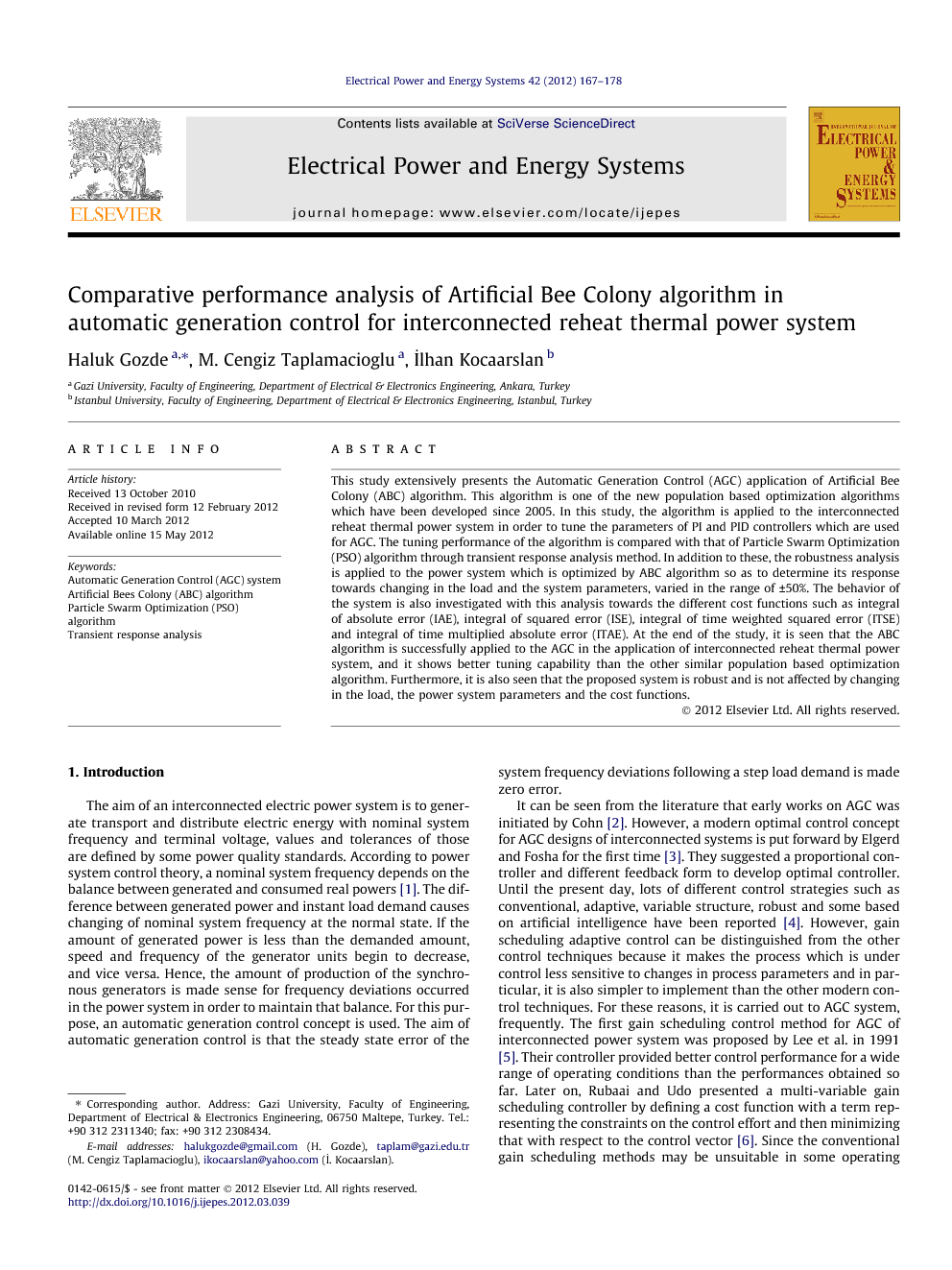 This study extensively presents the Automatic Generation Control (AGC) application of Artificial Bee Colony (ABC) algorithm. This algorithm is one of the new population based optimization algorithms which have been developed since 2005. In this study, the algorithm is applied to the interconnected reheat thermal power system in order to tune the parameters of PI and PID controllers which are used for AGC. The tuning performance of the algorithm is compared with that of Particle Swarm Optimization (PSO) algorithm through transient response analysis method. In addition to these, the robustness analysis is applied to the power system which is optimized by ABC algorithm so as to determine its response towards changing in the load and the system parameters, varied in the range of ±50%. The behavior of the system is also investigated with this analysis towards the different cost functions such as integral of absolute error (IAE), integral of squared error (ISE), integral of time weighted squared error (ITSE) and integral of time multiplied absolute error (ITAE). At the end of the study, it is seen that the ABC algorithm is successfully applied to the AGC in the application of interconnected reheat thermal power system, and it shows better tuning capability than the other similar population based optimization algorithm. Furthermore, it is also seen that the proposed system is robust and is not affected by changing in the load, the power system parameters and the cost functions.

The aim of an interconnected electric power system is to generate transport and distribute electric energy with nominal system frequency and terminal voltage, values and tolerances of those are defined by some power quality standards. According to power system control theory, a nominal system frequency depends on the balance between generated and consumed real powers [1]. The difference between generated power and instant load demand causes changing of nominal system frequency at the normal state. If the amount of generated power is less than the demanded amount, speed and frequency of the generator units begin to decrease, and vice versa. Hence, the amount of production of the synchronous generators is made sense for frequency deviations occurred in the power system in order to maintain that balance. For this purpose, an automatic generation control concept is used. The aim of automatic generation control is that the steady state error of the system frequency deviations following a step load demand is made zero error. It can be seen from the literature that early works on AGC was initiated by Cohn [2]. However, a modern optimal control concept for AGC designs of interconnected systems is put forward by Elgerd and Fosha for the first time [3]. They suggested a proportional controller and different feedback form to develop optimal controller. Until the present day, lots of different control strategies such as conventional, adaptive, variable structure, robust and some based on artificial intelligence have been reported [4]. However, gain scheduling adaptive control can be distinguished from the other control techniques because it makes the process which is under control less sensitive to changes in process parameters and in particular, it is also simpler to implement than the other modern control techniques. For these reasons, it is carried out to AGC system, frequently. The first gain scheduling control method for AGC of interconnected power system was proposed by Lee et al. in 1991 [5]. Their controller provided better control performance for a wide range of operating conditions than the performances obtained so far. Later on, Rubaai and Udo presented a multi-variable gain scheduling controller by defining a cost function with a term representing the constraints on the control effort and then minimizing that with respect to the control vector [6]. Since the conventional gain scheduling methods may be unsuitable in some operating conditions due to the complexity of the power systems such as nonlinear load characteristics and variable operating points, a usage of artificial intelligence based methods were preferred by researchers from the beginning of these dates. In 1997, Chang reported the usage of fuzzy logic based gain scheduling method for power system AGC [7]. As different from the usage of two fuzzy rules for integral and proportional gains in PI controller by Chang, Çam and Kocaarslan who improved the performance of this approach in 2005 by which the rules for the gains are chosen to be identical [8]. Talaq suggested an adaptive fuzzy gain scheduling method for conventional PI controller in 1999 [9]. Then, Pingkang optimized the gains of PI and PID controllers through real coded genetic algorithm in a two area power system in 2002 [10]. After 1 year from Pinkang’s study, Abdel-Magid and Abido proposed a usage of PSO for the same purpose [11]. In 2004, Yeşil suggested the self tuning fuzzy PID type controller for AGC [12]. One year after, Juang put forward the genetic algorithm based fuzzy gain scheduling method for PI controller [13]. In this study, to reduce both the fuzzy system design effort and the number of fuzzy rules, the fuzzy system used for gain scheduling is automatically designed by genetic algorithms. In 2006, Massiala used two layered fuzzy gain scheduling controller in order to improve the dynamic performance of AGC in a two area reheat thermal power system with generation rate constraints [14]. Taher composed a hybrid PSO algorithm for the gain scheduling of PI controller in a two area thermal power system in 2008 [15]. The hybrid PSO algorithm contained evolutionary operators like selection, crossover and mutation as in genetic algorithms or DE algorithm. In the year 2009, Nanda suggested a maiden application of bacterial foraging optimization based gain scheduling PI controller in a multi area AGC [16]. Rao et al. studied an automatic generation control on TCPS based hydrothermal system [17]. In 2010, Gozde et al. designed the PSO based PI-controller with the new cost function and compared their results with the results of Abdel-Magid and Abido’s study [18]. In 2011, Gozde and Taplamacioglu proposed the usage of craziness based PSO algorithm for AGC system for an interconnected thermal power plants [19]. Except for those studies, it can be evaluated that ABC algorithm may be used as an alternative tuning method due to its superior local and global search capability provided by separate artificial bee colonies like as employers, onlookers and scouts [20] and [21]. So far, this algorithm successfully applied to the different optimization or control processes. Some of them are the neural networks training [22], the quadratic knapsack problem [23], and the parameter extraction of MESFETs [24], the economic dispatch problem [25], the clustering [26], the prediction of protein tertiary structure [27], the power system stabilizer [28], the load–frequency control for interconnected power system [29] and [30] and the PID controller tuning [31] and [32]. The aim of this study which is different from the above literature is that the ABC algorithm is applied to the AGC system for tuning the PI and PID controller parameters and its tuning performance and robustness are investigated comparatively by using PSO algorithm. For this purpose, a self-tuning PI and PID controllers are designed and their control parameters are tuned by the mentioned optimization algorithms separately and then the transient response analysis method is extensively used to determine the superiority of these algorithms according to each other.

This study presents both the usage of ABC algorithm as the new artificial intelligence based optimization technique in order to optimize the AGC system and the comprehensive analysis of its tuning performance and its contribution to robustness. To reveal the tuning performance of ABC algorithm, the PSO algorithm is applied to the control system for the purpose of comparison. Then transient response method is applied to obtain the analysis results, and the tuning superiority of ABC algorithm is proved by using this analysis technique. It is evaluated that this result is caused by the triple search capability of the ABC algorithm. As explained at the related section, the local search is realized by employed and onlooker bee phases and global search is realized by scout bee phase in ABC algorithm consecutively and separately. In contrast, the local and global searches are realized by the same update formula in PSO algorithm. On the other hand, the robustness of this algorithm is also proved by the applied method. Accordingly, the control system that optimized by ABC algorithm is not affected by changes of the load, the power system parameters varied in the range of ±50% and standard cost functions such as ISE, ITSE, IAE and ITAE. Consequently it is seen from this study, the new optimization algorithm named ABC algorithm can be applied to the AGC system successfully and its tuning capability is composed. In the following studies, the proposed optimal self-tuning PID control technique will be applied practically and will be investigated its control performance in reality. ABC algorithm can be applied to other adaptive or optimal control techniques. There are some theoretical and simulation studies about them in related literature, but its practical implementation as a microprocessor software will be also realized. In addition to these, the cases of the different damping load parameters and more than two control areas in AGC system can be also investigated.