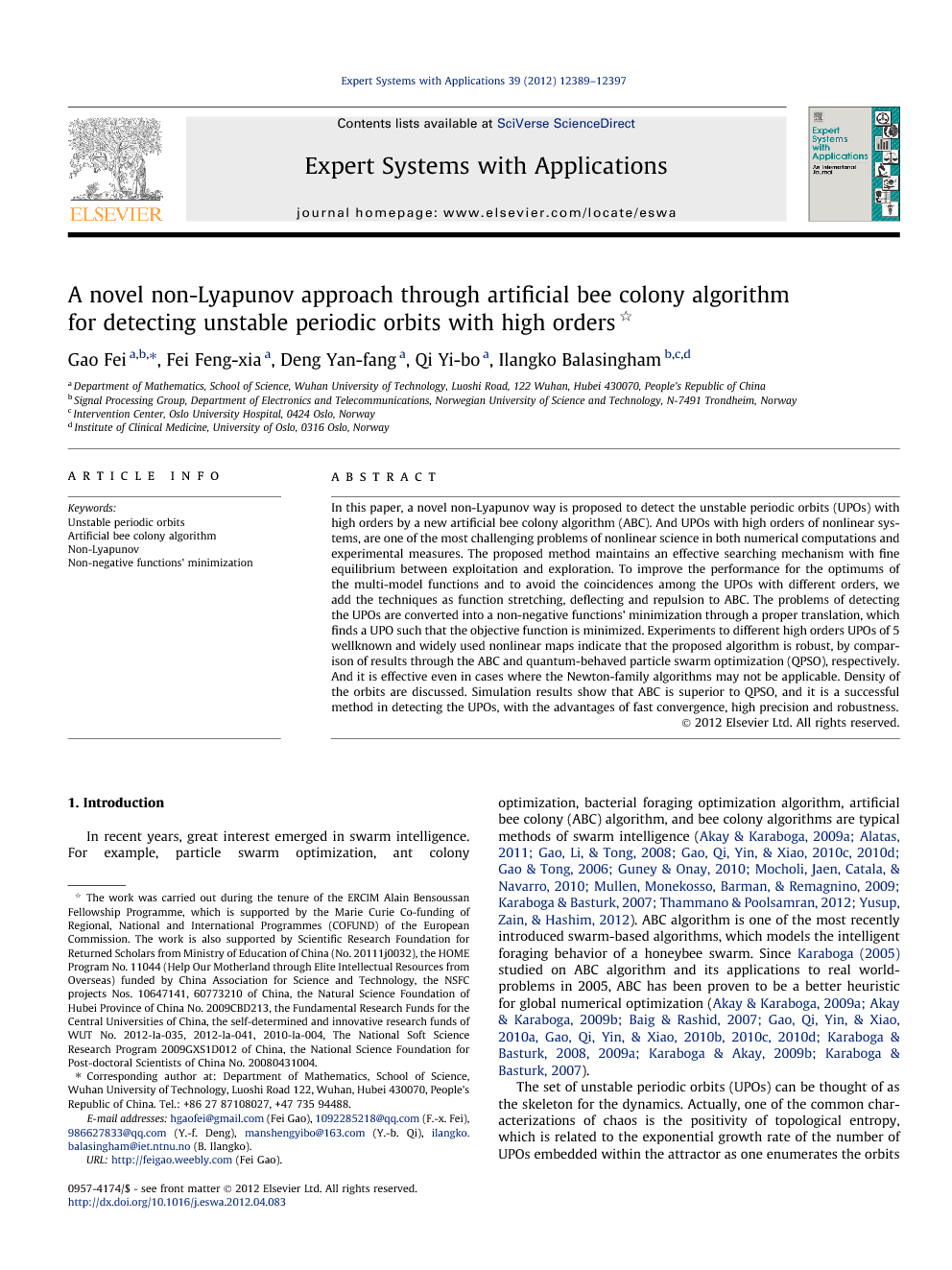 In this paper, a novel non-Lyapunov way is proposed to detect the unstable periodic orbits (UPOs) with high orders by a new artificial bee colony algorithm (ABC). And UPOs with high orders of nonlinear systems, are one of the most challenging problems of nonlinear science in both numerical computations and experimental measures. The proposed method maintains an effective searching mechanism with fine equilibrium between exploitation and exploration. To improve the performance for the optimums of the multi-model functions and to avoid the coincidences among the UPOs with different orders, we add the techniques as function stretching, deflecting and repulsion to ABC. The problems of detecting the UPOs are converted into a non-negative functions’ minimization through a proper translation, which finds a UPO such that the objective function is minimized. Experiments to different high orders UPOs of 5 wellknown and widely used nonlinear maps indicate that the proposed algorithm is robust, by comparison of results through the ABC and quantum-behaved particle swarm optimization (QPSO), respectively. And it is effective even in cases where the Newton-family algorithms may not be applicable. Density of the orbits are discussed. Simulation results show that ABC is superior to QPSO, and it is a successful method in detecting the UPOs, with the advantages of fast convergence, high precision and robustness.

In recent years, great interest emerged in swarm intelligence. For example, particle swarm optimization, ant colony optimization, bacterial foraging optimization algorithm, artificial bee colony (ABC) algorithm, and bee colony algorithms are typical methods of swarm intelligence (Akay and Karaboga, 2009a, Alatas, 2011, Gao et al., 2008, Gao et al., 2010c, Gao et al., 2010d, Gao and Tong, 2006, Guney and Onay, 2010, Mocholi et al., 2010, Mullen et al., 2009, Karaboga and Basturk, 2007, Thammano and Poolsamran, 2012 and Yusup et al., 2012). ABC algorithm is one of the most recently introduced swarm-based algorithms, which models the intelligent foraging behavior of a honeybee swarm. Since Karaboga (2005) studied on ABC algorithm and its applications to real world-problems in 2005, ABC has been proven to be a better heuristic for global numerical optimization (Akay and Karaboga, 2009a, Akay and Karaboga, 2009b, Baig and Rashid, 2007, Gao et al., 2010a, Gao et al., 2010b, Gao et al., 2010c, Gao et al., 2010d, Karaboga and Basturk, 2008, Karaboga and Akay, 2009a, Karaboga and Akay, 2009b and Karaboga and Basturk, 2007). The set of unstable periodic orbits (UPOs) can be thought of as the skeleton for the dynamics. Actually, one of the common characterizations of chaos is the positivity of topological entropy, which is related to the exponential growth rate of the number of UPOs embedded within the attractor as one enumerates the orbits by their lengths (Figueiredo and Chen, 1993, Katok and Hasselblatt, 2003, Ott, 1993, Ott et al., 1990, Zelinka et al., 2010 and Gao et al., 2009). And Biham and Wenzel proposed a good method to find many UPOs especially for Hénon system (Biham & Wenzel, 1989). UPOs are also important tools in affecting the behaviors of dynamical systems. Furthermore, many dynamical averages, such as the natural measure, the Lyapunov exponents, the fractal dimensions, can be efficiently expressed in terms of a sum over the unstable periodic orbits (Dhamala and Lai, 1999, Gao et al., 2009, Ott, 1993 and Pierson and Moss, 1995). However, finding UPOs of nonlinear mapping is one of the most challenging problems of nonlinear science in both numerical computations and experimental measures, as the following reasons: UPOs’ inner unstable nature and the analytic expressions for evaluating periodic orbits can be obtained only if the chaos system is the nonlinear polynomial of low degree and the period is low. In most experimental simulations, a time series data is usually the only available information from a dynamical system to determine the positions of UPOs (Awrejcewicz et al., 2004, Davidchack and Lai, 1999 and Schmelcher and Diakonos, 1997). Schmelcher and Diakonos have put an excellent algorithm (SD) (Schmelcher & Diakonos, 1997), which can be applied to detect higher periodic orbit and moreover it is globally converged. In addition, one modified version of SD has also been given to improve its converging rate (Bu et al., 2004 and Davidchack and Lai, 1999) and etc. And even some theoretical analysis have been done to achieve the high orders UPOs, however their simulations are only given in the cases of UPOs with low orders (Albers and Sprott, 2006 and Gluckman et al., 1997). A basic scheme in detecting UPOs from dynamically reconstructed phase space (So et al., 1996 and Takens, 1981) is to find recurrences of the iterated reconstructed map (Pierson & Moss, 1995). However, this method depended on the natural measure of the UPOs. An enhancement of the standard recurrence method was proposed later (So, Francis, Netoff, Gluckman, & Schiff, 1998). And these methods are not effective when the chaos systems are not differentiable. Then there are a couple of notable ones more recently: One is an adaptive control-based detection method proposed by Christini and Kaplan (2000). Unlike the above Lyapunov methods, the other method is a totally new one, by a swarm intelligence (Gao and Lee et al., 2009, Gao et al., 2009, Gao et al., 2008, Gao et al., 2012, Gao and Qi et al., 2012 and Parsopoulos and Vrahatis, 2003) in non-Lyapunov way. It can succeed even when the nonexistence of derivatives or poorly behaved partial derivatives in the neighborhood of the fixed points. But the results are not so satisfied and need to be progressed. The objective of this work is to present a novel simple but effective method to detect UPOs. In which, the UPOs are resolved by ABC. To improve the performance for the optimums of the multi-model functions and to avoid the coincidences among the UPOs with different orders, we add the techniques as stretching deflecting and repulsion to ABC. And the illustrative examples in different high order periods of 5 classical chaos systems system are discussed, respectively. These experiment results are much more better than quantum-behaved particle swarm optimization (QPSO) in Ref. (Gao et al., 2009 and Gao et al., 2008). The rest is organized as follows. Section 2 provides brief review for ABC. In Section 4, a proper mathematics model is introduced to transfer UPOs into a numerical optimization problems. In Section 5, firstly 5 famous nonlinear mappings are introduced, then simulations’ comparisons are done to detect the different orders UPOs at different high orders by ABC and QPSO in Ref. (Gao et al., 2009) respectively, lastly the results are analyzed. Conclusions are summarized briefly in Section 6.

From the viewpoint of optimization, the put method consists of a series of multi-dimensional numerical optimization problems to detect UPOs of chaotic systems. Simulation results demonstrate the effectiveness and efficiency of ABC, especially in some higher order cases of UPOs. And it is effective even in cases where the Newton-family algorithms may not be applicable. This is a new non-Lyaponov way in detecting the UPOs. Moreover, it also illustrated the simplicity and easy implementation of the other kind of swarm intelligent algorithms to replace ABC for applications. It should be pointed out that the technique in Section 5.3 is only a numerical way to get the orbits density. In the future research, the theoretical work will be done. We still have to improve the performance of ABC in the proposed method, for the reason that the more efficient the ABC is, the better the new method is in some degree. Only in this way, it can have a large application areas.