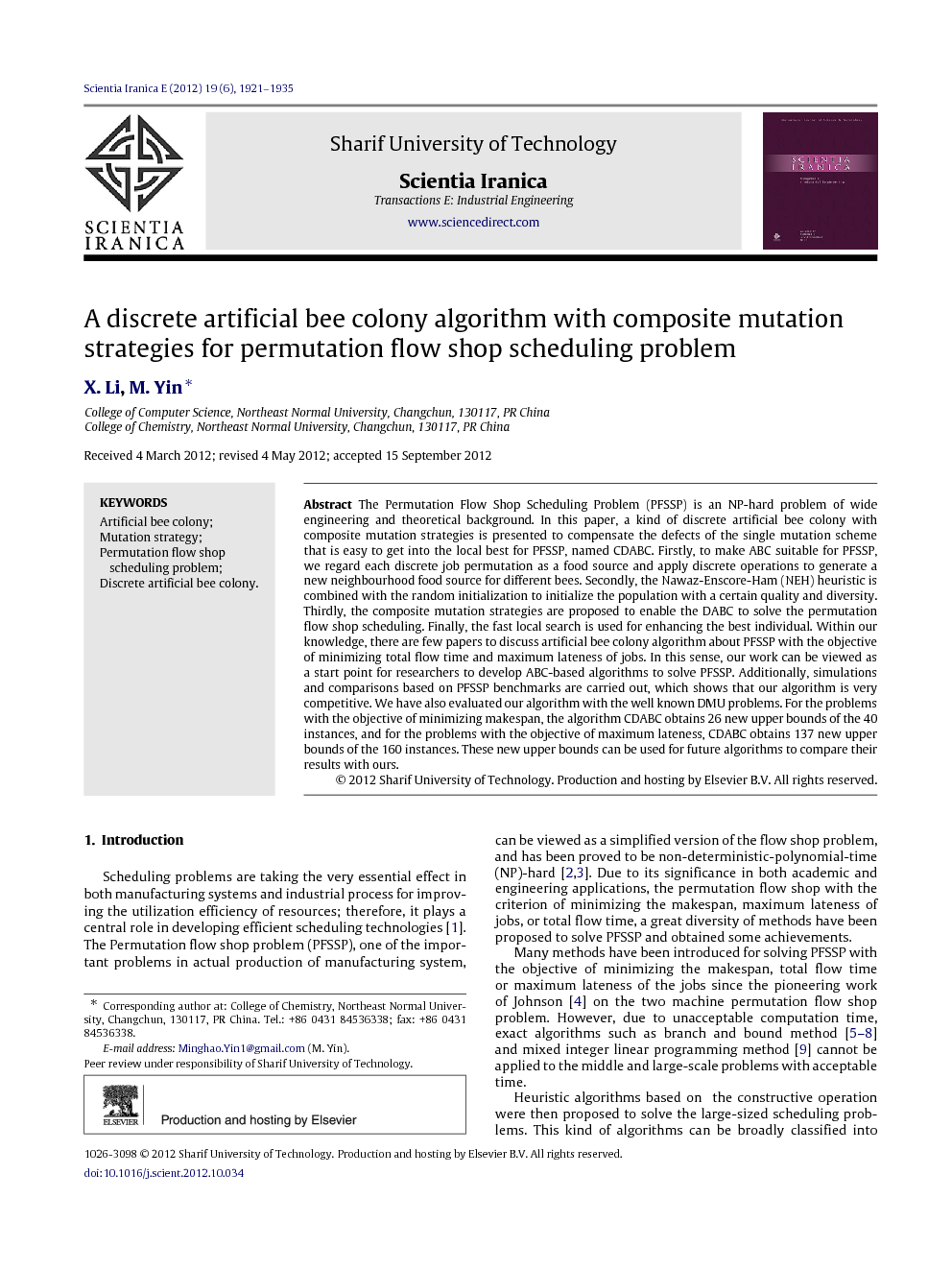 The Permutation Flow Shop Scheduling Problem (PFSSP) is an NP-hard problem of wide engineering and theoretical background. In this paper, a kind of discrete artificial bee colony with composite mutation strategies is presented to compensate the defects of the single mutation scheme that is easy to get into the local best for PFSSP, named CDABC. Firstly, to make ABC suitable for PFSSP, we regard each discrete job permutation as a food source and apply discrete operations to generate a new neighbourhood food source for different bees. Secondly, the Nawaz-Enscore-Ham (NEH) heuristic is combined with the random initialization to initialize the population with a certain quality and diversity. Thirdly, the composite mutation strategies are proposed to enable the DABC to solve the permutation flow shop scheduling. Finally, the fast local search is used for enhancing the best individual. Within our knowledge, there are few papers to discuss artificial bee colony algorithm about PFSSP with the objective of minimizing total flow time and maximum lateness of jobs. In this sense, our work can be viewed as a start point for researchers to develop ABC-based algorithms to solve PFSSP. Additionally, simulations and comparisons based on PFSSP benchmarks are carried out, which shows that our algorithm is very competitive. We have also evaluated our algorithm with the well known DMU problems. For the problems with the objective of minimizing makespan, the algorithm CDABC obtains 26 new upper bounds of the 40 instances, and for the problems with the objective of maximum lateness, CDABC obtains 137 new upper bounds of the 160 instances. These new upper bounds can be used for future algorithms to compare their results with ours.

The permutation flow shop scheduling problem is important both in theoretical and engineering application fields. In this paper, we propose a discrete artificial bee colony-based hybrid algorithm, i.e. CDABC, to solve PFSSP. As we know, the original ABC algorithm is a continuous optimization algorithm; therefore, it cannot be used to solve PFSSP directly. We construct a direct relationship between the job sequence and the vector of individuals in ABC. In this way, the resulting discrete ABC algorithm can solve PFSSP problem, and what’s more, several heuristics and local search methods are incorporated into our algorithm. These methods help our algorithm to obtain a better initialization, better individuals during search, and a better global searching ability as well. Up to now, only few ABC algorithms can solve the scheduling problems. As to PFSSP, within our knowledge, our algorithm is the first one to solve this problem. In this sense, our algorithm may help other researchers focus on solving this problem, and what’s more, in order to evaluate the performance of the proposed CDABC algorithm, we compare CDABC with several state-of-the-art PFSSP algorithms with benchmark problems of PFSSP. Experimental results have shown that our algorithm can usually produce statically better results than other algorithms. Especially, for the DMU problems from Demirkol with the objective of minimizing makespan, the algorithm CDABC obtains 25 new upper bounds of the 40 instances and for the DMU problems with the objective of maximum lateness, CDABC obtains 137 new upper bounds of the 160 instances. These new results can be used for future research to provide new algorithms and to compare their results with our solutions. Moreover, our further work is to study the theoretical aspects as well as the performance of the technique. The other problem is to extend the algorithm to solve other combination problem such as job shop scheduling.