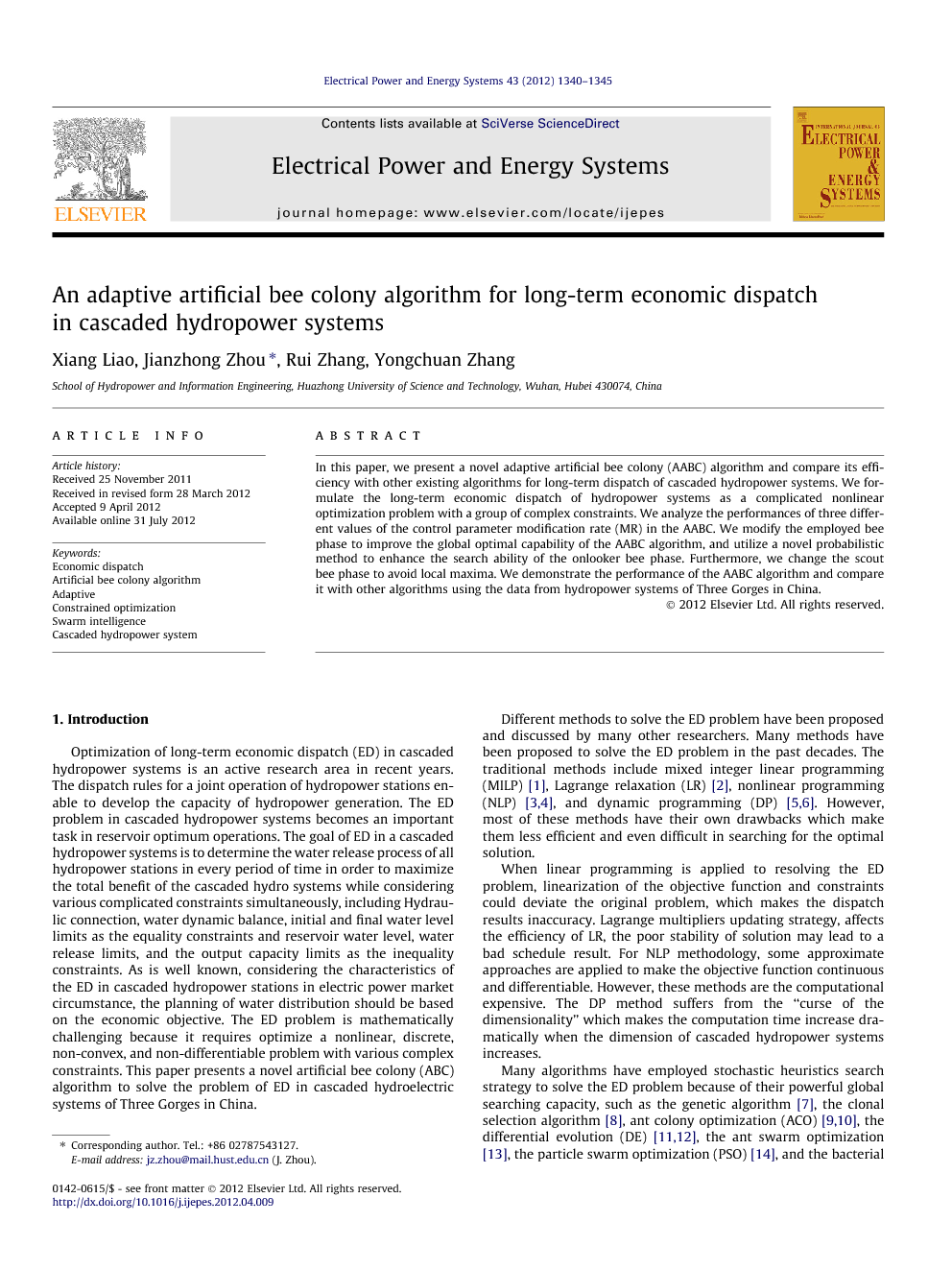 In this paper, we present a novel adaptive artificial bee colony (AABC) algorithm and compare its efficiency with other existing algorithms for long-term dispatch of cascaded hydropower systems. We formulate the long-term economic dispatch of hydropower systems as a complicated nonlinear optimization problem with a group of complex constraints. We analyze the performances of three different values of the control parameter modification rate (MR) in the AABC. We modify the employed bee phase to improve the global optimal capability of the AABC algorithm, and utilize a novel probabilistic method to enhance the search ability of the onlooker bee phase. Furthermore, we change the scout bee phase to avoid local maxima. We demonstrate the performance of the AABC algorithm and compare it with other algorithms using the data from hydropower systems of Three Gorges in China.

Optimization of long-term economic dispatch (ED) in cascaded hydropower systems is an active research area in recent years. The dispatch rules for a joint operation of hydropower stations enable to develop the capacity of hydropower generation. The ED problem in cascaded hydropower systems becomes an important task in reservoir optimum operations. The goal of ED in a cascaded hydropower systems is to determine the water release process of all hydropower stations in every period of time in order to maximize the total benefit of the cascaded hydro systems while considering various complicated constraints simultaneously, including Hydraulic connection, water dynamic balance, initial and final water level limits as the equality constraints and reservoir water level, water release limits, and the output capacity limits as the inequality constraints. As is well known, considering the characteristics of the ED in cascaded hydropower stations in electric power market circumstance, the planning of water distribution should be based on the economic objective. The ED problem is mathematically challenging because it requires optimize a nonlinear, discrete, non-convex, and non-differentiable problem with various complex constraints. This paper presents a novel artificial bee colony (ABC) algorithm to solve the problem of ED in cascaded hydroelectric systems of Three Gorges in China. Different methods to solve the ED problem have been proposed and discussed by many other researchers. Many methods have been proposed to solve the ED problem in the past decades. The traditional methods include mixed integer linear programming (MILP) [1], Lagrange relaxation (LR) [2], nonlinear programming (NLP) [3] and [4], and dynamic programming (DP) [5] and [6]. However, most of these methods have their own drawbacks which make them less efficient and even difficult in searching for the optimal solution. When linear programming is applied to resolving the ED problem, linearization of the objective function and constraints could deviate the original problem, which makes the dispatch results inaccuracy. Lagrange multipliers updating strategy, affects the efficiency of LR, the poor stability of solution may lead to a bad schedule result. For NLP methodology, some approximate approaches are applied to make the objective function continuous and differentiable. However, these methods are the computational expensive. The DP method suffers from the “curse of the dimensionality” which makes the computation time increase dramatically when the dimension of cascaded hydropower systems increases. Many algorithms have employed stochastic heuristics search strategy to solve the ED problem because of their powerful global searching capacity, such as the genetic algorithm [7], the clonal selection algorithm [8], ant colony optimization (ACO) [9] and [10], the differential evolution (DE) [11] and [12], the ant swarm optimization [13], the particle swarm optimization (PSO) [14], and the bacterial foraging [15]. Nevertheless, all these methodologies mentioned above have their disadvantages which make algorithms suffer from premature convergence. In addition, searching ability of these algorithms is sensitive to parameter settings. Traditional methods have their disadvantages. The modern heuristics stochastic search algorithms have their drawbacks too. In order to overcome these problems above, much research has been carried out to improve these algorithms mentioned above. In literature [16], the Lambda iteration technique was applied to resolve the thermal sub problem. Combined with GA, the proposed method obtained a better result in solving a hydrothermal scheduling problem. The Chaotic local search algorithm has been combined with differential evolution algorithm to solve dynamic economic dispatch problem in literature [17]. The chaotic differential evolution algorithm improves the searching ability of DE efficiency with a better result. In literature [18], the self adaptive inertia weight mechanism is combined with the particle swarm intelligence algorithm to determine the generation schedule of a cascaded hydro system located at Narmada river in India. Results demonstrated the effectiveness of proposed method. These modifications have improved different aspects of optimization techniques. However, the hybrid methods may lead to a more complex algorithm because of the added parameters. Swarm intelligence is a new category of stochastic search optimization algorithms based on procedures that imitate collective behavior and emergent intelligence in natural environment. One of these swarm intelligence algorithms has shown great potential and good performance for solving various optimization problems is the artificial bee colony (ABC) algorithm [19], [20], [21] and [22]. The ABC algorithm [19] and [23] draw inspiration from the foraging of honeybees is one of the latest swarm intelligence algorithms. Due to the simple framework and quick convergence, ABC algorithms have been successfully used in training artificial neural networks [24] and [25], the electromagnetic problem [26], reactive power optimization [27] and [28], digital filters design [29] and [30], pattern classification [31], urban subway routes [32], forecasting stock markets [33], dynamic deployment of the wireless sensor networks [34] and so on. However, it seems that little research focuses on the performance of ABC applied in the LED problem. Moreover, insufficient attention has been paid to the research on how artificial bee colony affected by dynamic parameter setting. Meanwhile, as a stochastic search algorithm, ABC suffered from premature convergence either. For these reasons, this paper presents an adaptive artificial bee algorithm to solve the LED problem in a cascaded hydro system. The improvements have been made in the employed bee phase, the onlooker bee phase and the scout bee phase. Meanwhile, a simple and convenient method has been adopted to handle the various complicated constraints of the LED problem. The rest of the paper is organized as follows. Section 2 describes the model of the long-term economic dispatch problem. Section 3 introduces the introduction of the original ABC algorithm. Section 4 presents the AABC algorithm. Section 5 evaluates the proposed algorithm and compares it with different algorithms using the data from a Three Gorges hydropower system in China. Section 6 makes conclusions and outlines some future work.

An AABC algorithm has been developed in this paper to solve the ED problem. The significant modifications are mainly focused on preventing premature convergence of ABC. In the proposed method, an adaptive dynamic parameter control mechanism is applied to determine the optimal value setting of the parameter MR of ABC to improve the search capability of the algorithm. Moreover, a modified onlooker bee phase and a modified scout bee phase has been introduced in this paper for improve the performance of AABC further. Finally, simulations are implemented by applying AABC method to solve the ED problem of Three Gorges hydropower systems to verify the feasibility and effectiveness of the proposed method. The simulation results show that the proposed AABC can obtain better schedule results with lager generation benefits and generated energy, lower computational time and better convergence property compared to other established methods in Three Gorges hydropower systems. Therefore it provides a new effective approach for solving the ED problem. The future research is to consider the AABC algorithm combining with other methods for solving multi objective scheduling problems in cascaded hydropower systems.