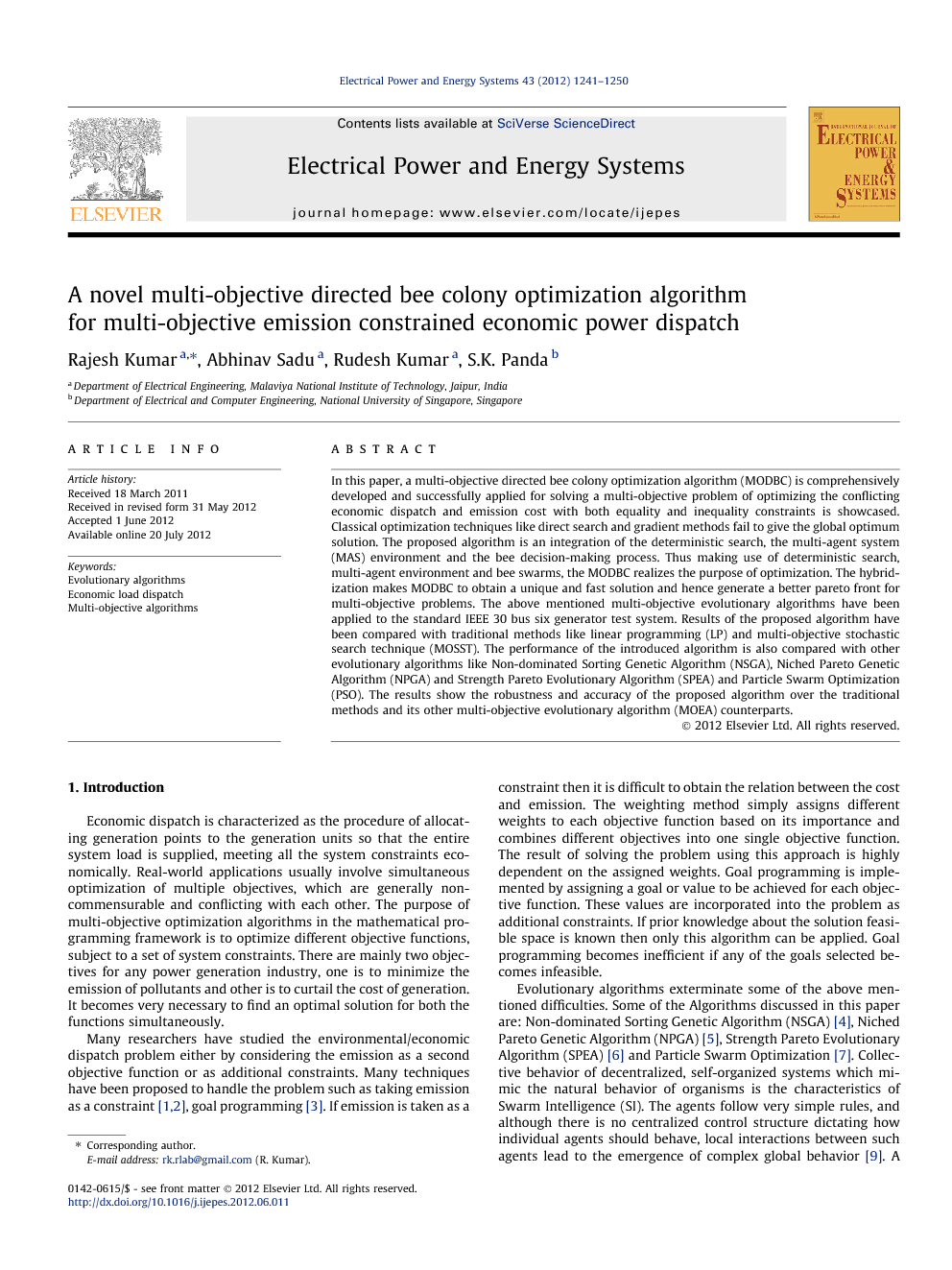 In this paper, a multi-objective directed bee colony optimization algorithm (MODBC) is comprehensively developed and successfully applied for solving a multi-objective problem of optimizing the conflicting economic dispatch and emission cost with both equality and inequality constraints is showcased. Classical optimization techniques like direct search and gradient methods fail to give the global optimum solution. The proposed algorithm is an integration of the deterministic search, the multi-agent system (MAS) environment and the bee decision-making process. Thus making use of deterministic search, multi-agent environment and bee swarms, the MODBC realizes the purpose of optimization. The hybridization makes MODBC to obtain a unique and fast solution and hence generate a better pareto front for multi-objective problems. The above mentioned multi-objective evolutionary algorithms have been applied to the standard IEEE 30 bus six generator test system. Results of the proposed algorithm have been compared with traditional methods like linear programming (LP) and multi-objective stochastic search technique (MOSST). The performance of the introduced algorithm is also compared with other evolutionary algorithms like Non-dominated Sorting Genetic Algorithm (NSGA), Niched Pareto Genetic Algorithm (NPGA) and Strength Pareto Evolutionary Algorithm (SPEA) and Particle Swarm Optimization (PSO). The results show the robustness and accuracy of the proposed algorithm over the traditional methods and its other multi-objective evolutionary algorithm (MOEA) counterparts

Economic dispatch is characterized as the procedure of allocating generation points to the generation units so that the entire system load is supplied, meeting all the system constraints economically. Real-world applications usually involve simultaneous optimization of multiple objectives, which are generally non-commensurable and conflicting with each other. The purpose of multi-objective optimization algorithms in the mathematical programming framework is to optimize different objective functions, subject to a set of system constraints. There are mainly two objectives for any power generation industry, one is to minimize the emission of pollutants and other is to curtail the cost of generation. It becomes very necessary to find an optimal solution for both the functions simultaneously. Many researchers have studied the environmental/economic dispatch problem either by considering the emission as a second objective function or as additional constraints. Many techniques have been proposed to handle the problem such as taking emission as a constraint [1] and [2], goal programming [3]. If emission is taken as a constraint then it is difficult to obtain the relation between the cost and emission. The weighting method simply assigns different weights to each objective function based on its importance and combines different objectives into one single objective function. The result of solving the problem using this approach is highly dependent on the assigned weights. Goal programming is implemented by assigning a goal or value to be achieved for each objective function. These values are incorporated into the problem as additional constraints. If prior knowledge about the solution feasible space is known then only this algorithm can be applied. Goal programming becomes inefficient if any of the goals selected becomes infeasible. Evolutionary algorithms exterminate some of the above mentioned difficulties. Some of the Algorithms discussed in this paper are: Non-dominated Sorting Genetic Algorithm (NSGA) [4], Niched Pareto Genetic Algorithm (NPGA) [5], Strength Pareto Evolutionary Algorithm (SPEA) [6] and Particle Swarm Optimization [7]. Collective behavior of decentralized, self-organized systems which mimic the natural behavior of organisms is the characteristics of Swarm Intelligence (SI). The agents follow very simple rules, and although there is no centralized control structure dictating how individual agents should behave, local interactions between such agents lead to the emergence of complex global behavior [9]. A natural example of SI includes ant colonies, bird flocking, animal herding, bacterial growth, and fish schooling. Various algorithms derive from SI are the Ant Colony Optimization (ACO), GA and Particle Swarm Optimization (PSO) [10], [11] and [16]. Particle Swarm Optimization (PSO) algorithm is based on social behavior of groups like flocking of birds or schooling of fish. It is a stochastic, population-based evolutionary computer algorithm for problem solving. It is a kind of swarm intelligence that predicts everyone solution as ‘‘particles” which evolve or change their positions with time. Each particle modifies its position in search space in accordance with its own experience and also that of neighboring particle by remembering the best position visited by itself and its neighbors, then calculating local and global positions. In this paper, we use our own developed a new algorithm renamed as MODBC for multi-objective problems [13], [14] and [15], which is a hybrid version on MAS, which mimics its structure and modified Nelder–Mead method to find an optimal solution. The decision making technique is mimicked from bee decision-making process. The decision-making process is based on the algorithm used by bees for finding a suitable place for establishing new colony. The experimental results show the robustness and accuracy of MODBC over genetic algorithm and PSO. Due to its hybrid nature, this algorithm provides only deterministic solutions. Making use of these agents–agent interactions and evolution mechanism of bee swarms in a lattice-like environment, the proposed method can find high-quality solutions reliably with the faster convergence characteristics in a reasonably good computation time. This paper is organized as follows. The hybrid algorithm is comprising of two parts search algorithm and other as the decision making process. Section 2 details, the problem formulation and the related issues. The development and working of the MODBC is elaborated in Section 3. The starting point and the number of agents are important issues while handling such algorithms. The choice of the number of agents and the starting point of search are also presented and discussed. The decision making process in the honey bees makes them an interesting swarm research area to work. Section 4 also discusses the decision making method used by the bees in the proposed algorithm. Section 5 discusses simulation and experimental results made on the problem formulated. Two different cases with different conditions have been considered in this paper. Above reported techniques have been applied to the standard IEEE 30-bus six-generator test system. A comparative study of the performance of the proposed algorithm with SPEA NSGA, and NPGA has been carried out for solving the multi-objective economic/environmental dispatch problem. MOEA techniques have also been compared with classical methods. The effectiveness of MODBC techniques to handle the EED problem over the classical methods and other MOEA counterparts is demonstrated. Finally, Section 6 concludes the paper.

In this paper, the MODBC method has been proposed to show case the ability of the proposed algorithm to handle multi-objective functions. From the table (Table 5) where the comparison between the different methods, used to optimize the cost and emission function individually, it is evident that the MODBC method gave better optimal solutions. The optimal value of the cost function was lesser than the values obtained by any of the other optimization technique when losses were ignored. Whereas the solution for the emission function was found better than the solution obtained by NSGA and NPGA and with the results obtained from other techniques. The two objective functions were combined to form the single multi-objective function as given in the equation (Eq. (18)). The optimization results, when losses are ignored and considered, are tabulated in Table 6 and Table 7 respectively. From these tables, it can be inferred that the MODBC has provided with the best solution among the other optimization techniques. The Pareto-optimal curves plotted in Fig. 7 and Fig. 8. The graphs compare the performance of MODBC, NSGA, NPGA, SPEA and PSO method. The graph obtained by the MODBC lies below the graph obtained by all the methods in both cases when losses were ignored and considered. This shows that when the multi-objective function at different values of h or the price penalty factor was optimized by MODBC, gave better optimal points and showed better diversity characteristics than other methods. The best compromise solution obtained by MODBC was better in both the cost and emission function values than the ones obtained from the other MOEAs when losses were considered and was better than the other methods either in the cost or in the emission function when losses were ignored. The results also show that MODBC removes the randomness in the algorithm and improves significantly in global optimization performance. The solution of MODBC shows consistency in the solution and hence it gives a better option to optimize real-time and online optimization problems. Therefore, it is clear that the proposed scheme is more efficient, robust and effective than any of the other techniques discussed.